A year after the pandemic decimated ridership, Amtrak officials say America’s passenger railroad is on the road to recovery. The railroad marked its 50th anniversary with a number of heritage units, including P42 161, seen here on Montana’s Marias Pass in June. Photo by Justin Franz.

It was not the birthday celebration that anyone had hoped for. Long before anyone had heard of COVID-19, Amtrak officials were hoping for a big party to mark its 50th anniversary in 2021, something on par with the 40th anniversary a decade earlier, which included an exhibit train roaming the country. The pandemic derailed those hopes — as it has many celebrations — but Amtrak still had a big 50th year, one that featured highs and lows, just like its first half-century.

When the calendar turned to 2021, the railroad was in an uncertain position. Ridership had been decimated by the pandemic in 2020 and many services were still operating on a reduced schedule, most notably the long-distance routes. Some wondered if the long-distance routes would ever fully return, but those worries were put to rest in March when the $1.9 trillion stimulus bill passed through Congress included a provision requiring all services to return by summer. It would not be the first check the federal government would hand Amtrak over the next 12 months. 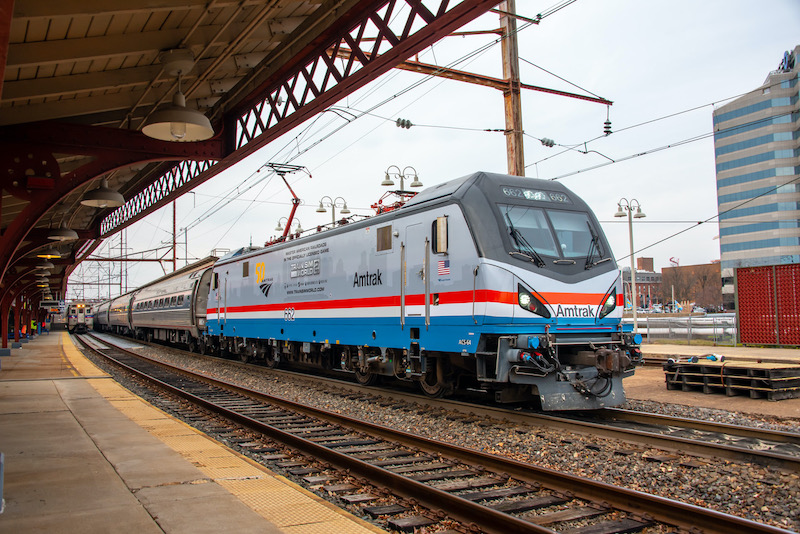 Amtrak would end up putting out seven heritage units in 2021 to celebrate its 50th anniversary, including an ASC-64 in Phase III, seen here in December. Photo by Steve Barry.

In March, Amtrak revealed plans for six new heritage units to celebrate its 50th anniversary: Five General Electric P42 locomotives and one Siemens ALC-42, one of the new long-distance Chargers currently being built. The locomotives entered service through the spring and summer and are presently gathered in the Washington D.C. area — possibly for a family portrait — before being put in service across the country. At the end of the year, a seventh heritage unit joined the fleet, a specially wrapped ASC-64 in the Phase III scheme, but officials say it will be short-lived.

On April 30, the day before its 50th anniversary, the railroad threw a socially distanced birthday bash in Philadelphia, headlined by perhaps its most famous passenger, President Joe Biden. During his remarks in front of one of the new heritage units and the next generation Acela, he declared that the railroad’s best days were ahead. “I am looking forward to a bright future for American rail,” Biden said. During a celebration in Philadelphia, President Joe Biden said that Amtrak’s brightest days were ahead of it. Photo Courtesy of Amtrak.

Biden has long been known to be a fan of passenger rail and Amtrak officials, perhaps knowing that this was their best shot at getting a boost in federal funding, lobbied hard for more money. In May, it released an ambitious plan to expand passenger rail service across the country to more than 160 communities over the next 15 years. The price tag? $75 billion. That plan got a big boost in November with the passage of the $1 Trillion Infrastructure Investment and Jobs Act, which included $66 billion for Amtrak and the rail industry. The bill represents one of the largest investments into the passenger railroad in its 50-year history. Officials have said the money will also go toward new equipment, much of which will be coming from Siemens Mobility, which was tapped to build up to 83 dual-power train sets for the Northeast Corridor and state-supported services over the next decade.

But it wasn’t all good news in 2021. In the fall, the railroad was hit with a trio of tragedies. In September, three people were killed when the Empire Builder derailed in Montana. A week later, a shooting onboard the Sunset Limited in Arizona left two people dead. And finally, in late October, five people were injured when the Heartland Flyer hit a truck carrying automobiles in Oklahoma. 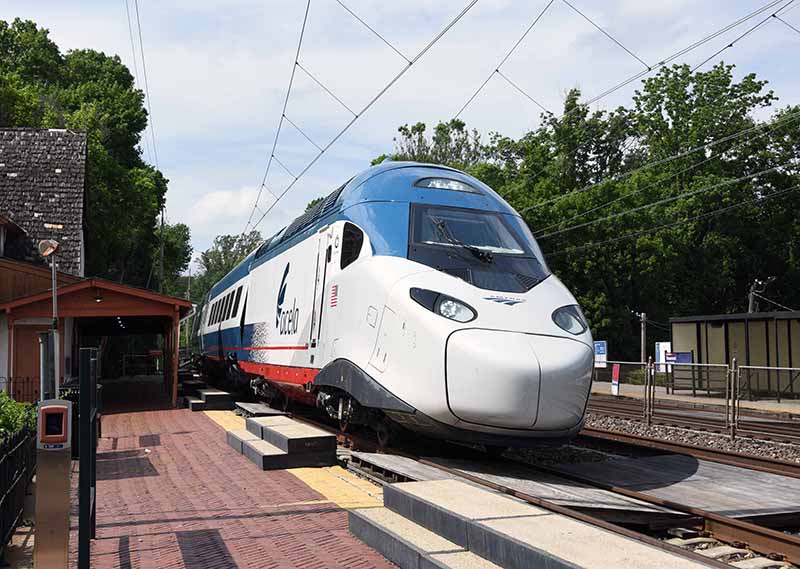 The railroad announced that the much-anticipated debut of Acela Avelia Liberty would be postponed until 2022. Photo by M.T. Burkhart.

Amtrak also suffered equipment issues this year. Most notably, the railroad announced that the much-anticipated debut of Amtrak’s Acela Avelia Liberty would be delayed by a year due to issues with the current overhead catenary system on the Northeast Corridor. Amtrak had also hoped to start testing its new Siemens Chargers on long-distance trains, but those new locomotives have yet to hit the main line with any regularity.

Before the year was over, there was also a shake up in the executive suite. In December it was announced that CEO Bill Flynn would retire after less than two years on the job and be replaced by President Stephen J. Gardner in January 2022.

Nearly 12 months after Amtrak entered its 50th anniversary amid clouds of uncertainty, things appear to be looking up for America’s railroad. In December, officials noted that ridership was now 70 percent of pre-pandemic levels and that it would likely be up to 80 percent by the New Year. Amtrak Board Chair Tony Coscia said that the legislative victories and efforts made in 2021 will set the stage for a bright future at Amtrak.

“Our 50th year as a company is certainly a milestone, and we launched several hallmark initiatives as we embark on a new era for passenger rail,” he said. 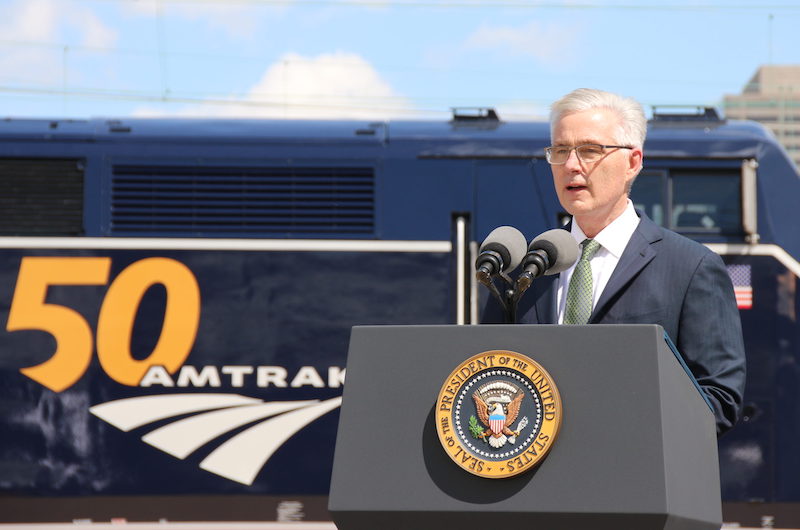 In December, the railroad announced that CEO Bill Flynn would be stepping down after just two years on the job. Photo Courtesy of Amtrak.