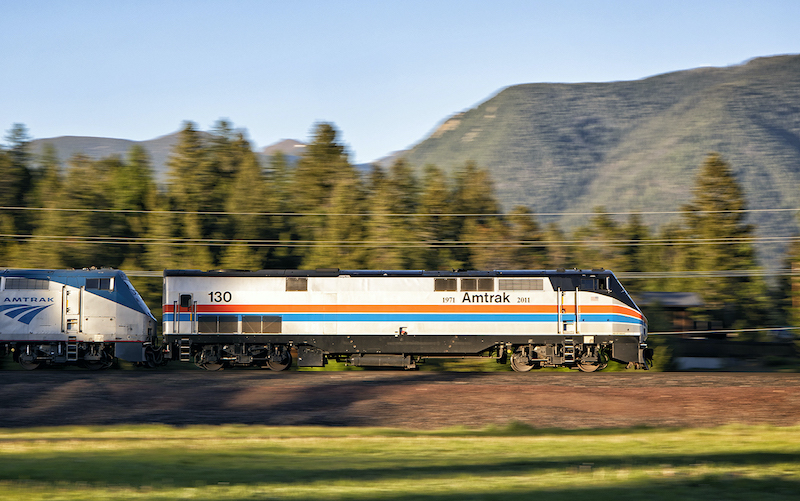 Amtrak is the big winner in the $1 trillion infrastructure bill in Congress over the weekend with billions of dollars heading to the passenger railroad over the next five years. Photo by Justin Franz.

WASHINGTON — Earlier this year, Amtrak officials announced an ambitious plan to expand passenger rail service across the country to more than 160 communities over the next 15 years. The price tag? $75 billion. This weekend, that plan got a significant boost with the passage of the $1 Trillion Infrastructure Investment and Jobs Act, which included $66 billion for Amtrak and the rail industry. The bill represents one of the largest investments into the passenger railroad in its 50-year history.

Amtrak officials are ecstatic and quickly praised the bipartisan legislation as the key to the railroad’s future success.

“Passenger rail offers the transportation solutions this country needs, and Amtrak is ready to make it happen,” said Amtrak CEO Bill Flynn. “This bill will allow Amtrak to advance significant infrastructure and major station projects on the NEC, purchase new passenger rail equipment and develop new rail corridors, bringing passenger rail to more people across the nation. As demonstrated by their commitment to rail in this bill, the Administration and Congress believe in the future of rail and Amtrak and we will move quickly to advance these projects.”

But what exactly is in the bill and how will Amtrak spend that money? Here’s a breakdown with the help of the Rail Passenger Association.

Amtrak will receive $22 billion — $6 billion for the Northeast Corridor and $16 billion for the national network — over five years to buy new passenger equipment for the long-distance network and state-supported services, as well as improve maintenance facilities and other infrastructure. It will also help the railroad upgrade its stations to comply with the Americans with Disabilities Act, a long-time issue for the railroad.

The bill also establishes what the Rail Passenger Association called “critical policy reforms,” especially for the long-distance network. The bill requires Amtrak to have a board of directors that represents interests across the network, with two members from Northeast Corridor states, two from long-distance route states and two from state-supported route states. It requires Amtrak to staff ticket agents at any station that averages at least 40 passengers per day. It requires Amtrak to provide more detail to Congress about how it’s spending its money. It eliminates an old Congressional mandate that Amtrak’s food and beverage services break even. And it requires the U.S. Department of Transportation to study and evaluate the restoration of daily intercity passenger service on any Amtrak long-distance route that has been discontinued, including the North Coast Hiawatha, which has been the subject of grassroots interest in Montana.

Freight railroad groups like the Association of American Railroads and the American Short Line and Regional Railroad Association were also praising the passage of the bill, specifically because the grant money going to the FRA will benefit their interests as well.