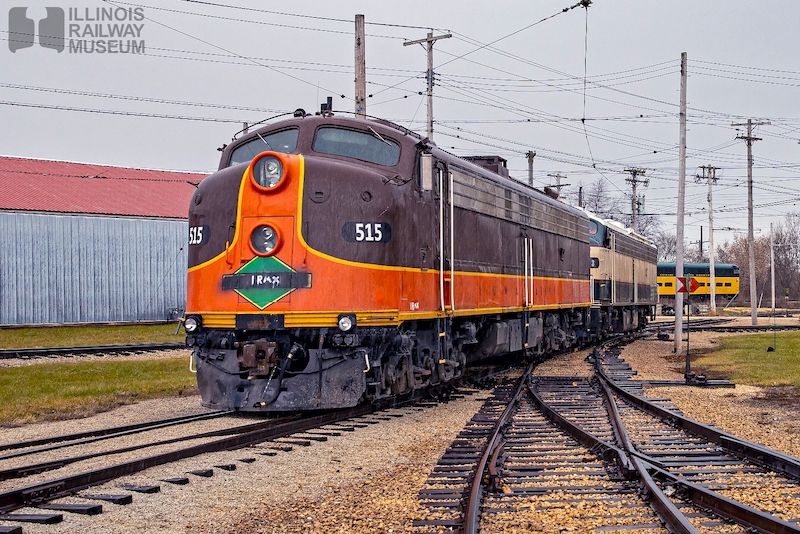 The ex-Chicago & North Western E8A arrived at the museum over the weekend and eventually will be repainted yellow and green. Photo Courtesy of Illinois Railway Museum.

UNION, Ill. — A former Chicago & North Western E8A has arrived at its new home at the Illinois Railway Museum. This weekend, E8A 515 arrived in Union, Ill., following a journey from storage in Mississippi. The locomotive was previously owned by Iowa Pacific and is part of the equipment fire sale stemming from that company’s bankruptcy.

The E8A has a long history in Illinois. It was built by EMD in McCook, Ill., in 1953, as C&NW 5029B. It was later renumbered 515 and assigned to commuter service in Chicago. It worked for Metra until the 1990s. The locomotive eventually ended up with Iowa Pacific. Earlier this year, longtime IRM volunteer Roger W. Kramer purchased the locomotive and donated it to the museum. It is the museum’s first E8A passenger locomotive and its first C&NW E-unit. Museum officials said the locomotive is complete and will be ready to run once it has a few minor repairs. The museum eventually plans on restoring it to its C&NW yellow and green.

The museum is asking for donations to help with the restoration. Click here for more information.