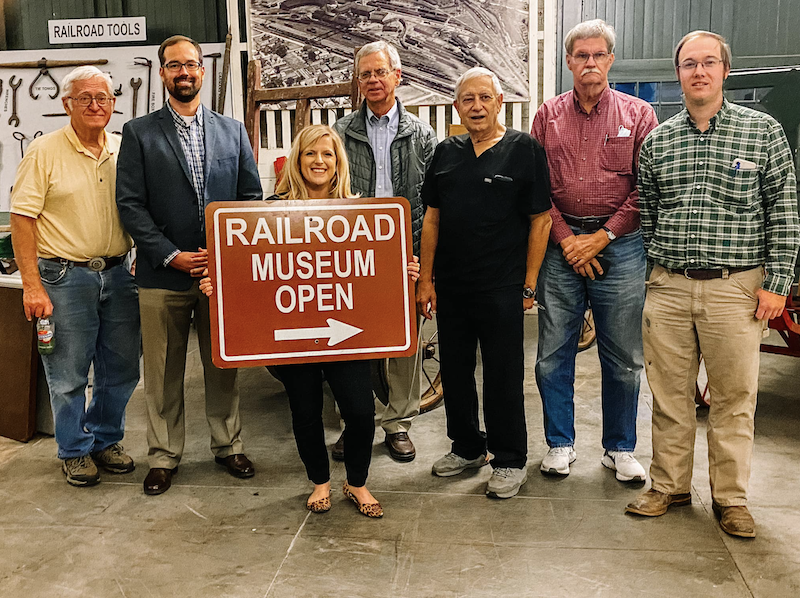 After being closed for a number of years, the Meridian Railroad Museum will open its doors again next month. Director and CEO Lucy Dormont, holding the sign, is seen with the non-profit’s board. Photo Courtesy of Meridian Rails Historical Society.

MERIDIAN, Miss. — A railroad museum in Mississippi will be reopening its doors next month after being closed for the last few years. The Meridian Railroad Museum, run by the Meridian Rails Historical Society, is expected to be open six days a week in the town’s old Railroad Express Agency building.

The reopening is due in large part to the efforts of Meridian Rails’ Director and CEO Lucy Dormont, who came to the project through a love of local history and her two train-obsessed boys, ages 3 and 4.

A railroad museum first opened in the then city-owned REA building back in the 1990s but it closed in the 2000s after the city announced new plans for the structure. Those plans never got off the ground and the building has been mostly unused ever since.

Then came Dormont. A few years ago, she was looking to entertain her train-obsessed son and was surprised to learn that at one time her town had a railroad museum. She did a little research, found that the town had a rich railroad history — at one time it was the largest city in the state thanks to the railroad — and wondered what it would take to reopen it. In 2020, Dormont established a non-profit and since then she and a small group of volunteers have been working to re-establish the museum. Dormont said it was a challenging endeavor and initially it was tough to get local support.

“They thought I’d get tired and give up, but I didn’t go away,” she said.

Last month, the group put on a railroad-themed festival, which attracted more than 2,000 people, Dormont said. Norfolk Southern even helped out with a corporate grant and put a locomotive on display nearby for the weekend. But perhaps the biggest step forward came in late November when the Meridian City Council voted to donate the REA building to the non-profit. While the building needs work — specifically a new roof — Dormont said they will be able to reopen the museum in January. Initial plans call for the museum to be open six days a week (Tuesday through Friday in the morning and all day on Saturday and Sunday).

The group also has big plans for the future. The group recently got another building, a 90,000 square foot structure, nearby that Dormont said would be perfect to house full-size locomotives and cars. The group also plans on eventually moving a steam locomotive that’s currently at a city park — Meridian & Bigbee 2-8-0 116 — to the site. Dormont said the long-term dream is to restore the locomotive to operating condition.

Dormont said she’s confident that the group will be able to achieve its goals.

For more information, visit meridianrails.org or find the museum on Facebook.