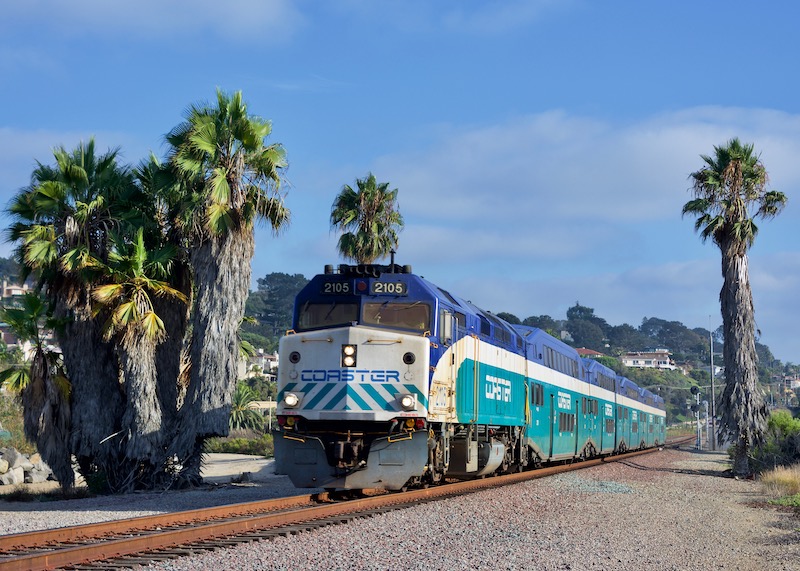 YouTuber Mike Armstrong helped coordinate an effort to save Coaster F40PHM-2C 2105, one of five F40s used by the commuter agency. The locomotive is now bound for the Southern California Railway Museum. Photo by Mike Armstrong.

PERRIS, Calif. — The man behind one of the biggest railfan video pages on YouTube has helped save a Coaster F40PHM-2C, the same locomotive that inspired the name for his account. Mike Armstrong, better known online as CoasterFan2105, announced earlier this month that Coaster 2105 would be heading to the Southern California Railway Museum for preservation and eventual restoration.

Armstrong grew up railfanning in southern California and has many fond memories of seeing Coaster’s F40 locomotives. North County Transit District’s Coaster acquired five from Morrison Knudsen in the mid-1990s and they were used regularly until 2021 when they were replaced with new Siemens SC-44 locomotives. Armstrong said he gravitated toward 2105 specifically because he had a model of it growing up.

Armstrong long dreamed of saving 2105 and that became a reality earlier this year. After the locomotives were retired, Coaster donated them to the Pacific Southwest Railway Museum in Campo, Calif., along the now-closed San Diego & Arizona. PSRM had hoped to use the SD&A — a stunning piece of railroad along the U.S.-Mexico border that has been the subject of numerous failed revivals — to move the locomotives, but until then decided to store them on Coaster property. By 2022, however, Coaster informed the museum that the locomotives needed to move. The museum began looking for buyers for four of the locomotives, at which point Armstrong sprung into action. Armstrong offered to make a sizeable donation to help cover the cost of trucking PSRM’s locomotive, 2103, to Campo, and in return, the museum would donate 2105 to SCRM (formally Orange Empire Railway Museum). All parties agreed and on July 9, PSRM signed 2105 over to SCRM.

Currently, SCRM is working with BNSF to move 2105 — along with its recently-restored Santa Fe SD45-2 — to Perris in the coming months.

Armstrong said the museum hopes to eventually restore the F40PHM-2C back to operation. As part of Coaster’s purchase of new SC-44 locomotives with the help of state funds, the F40 locomotives had to be disabled by removing sections of the generator and prime mover. The museum would like to get a waiver from the state in order to restore it, however, other options are being explored like using it as a cab car for special events.

Armstrong said he’s excited to see his favorite locomotive saved and he hopes that other young enthusiasts will appreciate seeing something from their childhood preserved.

“Museums survive on donations and volunteer efforts, and SCRM is no exception to this,” he said. “Having a newer piece of equipment on the property with that personal connection to younger generations is important for getting new volunteers to help with museum efforts. I am hopeful that it will encourage other people who remember these locomotives in service to get involved in museum activities.”

SCRM is in the process of setting up a dedicated fund for 2105. If you wish to donate, you will be able to do so either via check or through their website. Visit socalrailway.org for more information. If you do write a check and you want it to go specifically to the 2105 fund, make sure to write “2105” on the memo line. The museum is a 501(c)(3) organization, so all donations are fully tax deductible. PSRM also has a fund set up for their locomotive. You can find out more on their website at psrm.org.