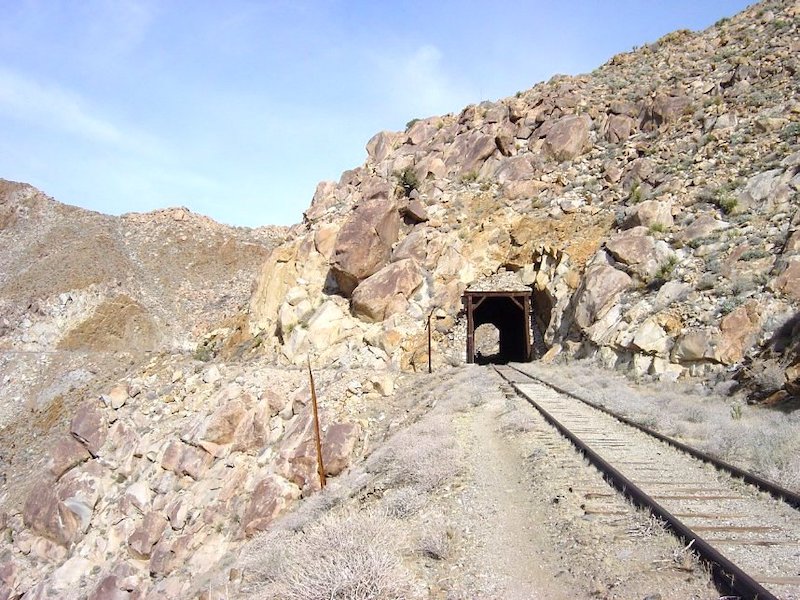 Freight has not run on the former San Diego & Arizona line in more than a decade but state officials still hope to someday change that. Photo by Bill Morrow (Creative Commons).

The future remains murky for one of the most stunning pieces of railroad in the American West.

It has been more than 10 years since trains ran on the former San Diego & Arizona through a rugged and remote stretch of California desert along the Mexican border. But the owner of the line, San Diego Metropolitan Transit System, is still hopeful that they will eventually find someone to run it.

The 148-mile San Diego & Arizona was constructed in the early 20th century between San Diego and El Centro, Calif., crossing back and forth over the international boundary. Today, the section in Mexico is operated by the Baja California Railroad but the eastern section in the United States has been unused for more than a decade. The 70-mile “Desert Line” from Tecate to Plaster City, Calif., features 17 tunnels and 57 bridges. Rockslides and rugged terrain through the area are some of the reasons the San Diego & Arizona was dubbed the “Impossible Railroad.” That line eventually became part of the Southern Pacific but it was later cast off due to the operational challenges associated with it. A number of short lines tried to operate the American section, but all failed. The Carrizo Gorge Railway was the last to operate the line in 2008.

Baja California Railroad leased the railroad for a few years and promised to rebuild it, but so far those promises have gone unkept. The railroad stopped paying its lease in 2020. Now the Metropolitan Transit System tells San Diago Union-Tribune that they’re looking for another operator.

“I do believe it’s an asset for the region, and if we have an opportunity to make the project work, we owe it to the public to try,” said Sharon Cooney, CEO of the San Diego Metropolitan Transit System.

Whoever does operate the line will have to do a lot of work before they can move trains. Bridges, including one of the world’s largest wooden trestles, and tunnels need significant work, officials said.