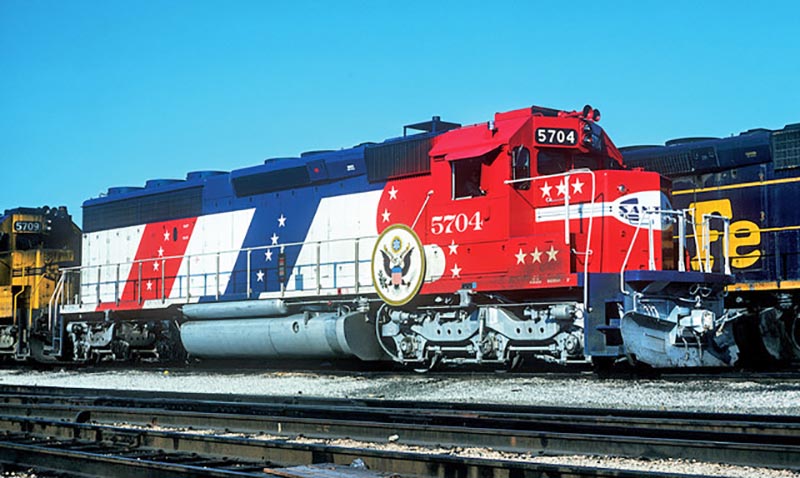 Southern California Railway Museum (SCRM) is adding a former Atchison, Topeka & Santa Fe freight locomotive to its collection that had been painted in a special bicentennial paint scheme to celebrate America’s 200th birthday in 1976. Built at La Grange, Ill., by the Electro-Motive Division of General Motors Corporation in 1973, the 3,600-horsepower SD45-2 type locomotive was one of five painted in a commemorative red, white, and blue scheme by Santa Fe at its San Bernardino, Calif., shops in late 1975 and early 1976.

Numbered 5700-5704, these 200-ton locomotives were found on the front of priority freight trains operating between California and Chicago and the Gulf Coast, as well as in a supporting role on the American Freedom Train nationwide tour while on Santa Fe lines. Santa Fe’s bicentennial locomotives were repainted into the company’s standard blue and yellow livery by late 1978 and operated on freight trains well after the 1996 merger with Burlington Northern that created today’s BNSF Railway.

“5704 is a former Santa Fe bicentennial locomotive and it had been recently retired from hauling freight and was due to be scrapped,” explained Stephen M. Priest, a former railroader, author, and historian who resides in the Kansas City area. “Myself and others feel this locomotive is worth preserving in its patriotic bicentennial paint scheme, especially given the nation’s Sestercentennial (250th birthday) is less than five years away.”

“Santa Fe 5704 will be a terrific addition to our museum’s collection, which already includes numerous pieces from that railroad,” stated Barry Busch, SCRM President and Chief Executive Officer. “We are delighted Stephen worked to facilitate a donation of the locomotive by BNSF, in addition to donations by Mid-America Car, Inc. of Kansas City, Mo., to cosmetically restore 5704; The Sherwin-Williams Company for providing paint, primer, and clear coat; Eagle Enterprises, Inc. of Wichita, Kan., which donated vinyl lettering; and Insight Print & Display in Kansas City, Mo., for donating specialized paint masking. This has been a collaborative effort to cosmetically restore and preserve Santa Fe 5704 to its bicentennial paint scheme glory for the benefit of generations to come.”

Once painting is completed, Santa Fe 5704 will be moved from Kansas City to SCRM in Perris, Calif. Efforts are concurrently underway to secure components that will potentially enable SCRM to mechanically restore Santa Fe 5704 to full operation. Restoration donations for the 5704, as well as other historical pieces, can be made at https://socalrailway.org/give/