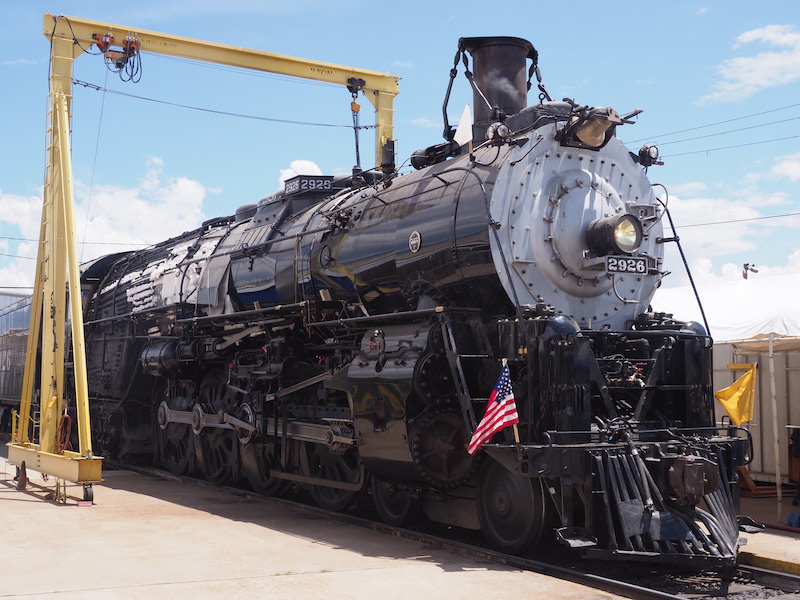 New Mexico Steam Locomotive & Railroad Historical Society says the group needs to work on the track at its facility to get the 4-8-4 onto the main. Photo Courtesy of NMSL&RHS.

ALBUQUERQUE, N.M. — When Atchison, Topeka & Santa Fe Railway 4-8-4 2926 moved under its own power for the first time in 68 years last Saturday, it immediately became the country’s largest operating 4-8-4 steam locomotive. And a big locomotive like that needs good track and a lot of it to truly strut its stuff, said New Mexico Steam Locomotive & Railroad Historical Society President Michael Hartshorne.

With 2926 almost road-ready, the locomotive’s caretakers are already now turning their attention to track, both locally near its restoration facility in Albuquerque, and beyond to ensure the group has a place to show off their hard work.

NMSL&RHS has been working on 2926 for 22 years and this past weekend’s steam-up was a historic milestone, Hartshorne said. AT&SF 2926 was built in 1944 by the Baldwin Locomotive Works and was one of the last steam-powered passenger locomotives purchased by the Santa Fe. It was retired in 1953.

“Everyone was thrilled,” Hartshorne said of the first run. “We’ve been working on this engine for two decades and so it was nice to see that it actually works!”

Hartshorne said there are still some cosmetic things that need to be completed, most notably installing the glossy boiler jacket (Which Hartshorne describes as one of the worst jobs in steam preservation but a necessary one to get a pretty looking locomotive). While some crew members work on that, others are preparing for trackwork and the installation of a new crossing. The 2926 is housed in an industrial area of Albuquerque and much of the track in that part of town consists of older, lighter rail, not ideal for a heavy 4-8-4. The crossing directly behind the group’s shop is also in need of replacement. NMSL&RHS will have to pay for both of those improvements. Hartshorne said that about a quarter-mile of track will need to be upgraded so that they can reach the nearby main line, which is owned by the State of New Mexico and used by New Mexico Rail Runner Express and BNSF Railway.

Members of the group are also negotiating an operating agreement with the New Mexico Department of Transportation to use the state-owned track, which includes the former Santa Fe main line to Raton Pass (home to a number of working semaphores). Hartshorne said running on the main line will require coordination between the state and BNSF, which still operates it, but is warm to the idea of letting the 4-8-4 run on it. NMSL&RHS also has an open invite to run on the Grand Canyon Railway, although getting there would require a run on BNSF’s busy Southern Transcon. There’s also the issue of insurance. For years, Amtrak let main line steam operators use its insurance for excursions, but that policy has since changed.

Despite the many challenges ahead, Hartshorne said none of them are insurmountable and that he’s confident people will soon get to see their newly-restored 4-8-4 strut its stuff across the Southwest.