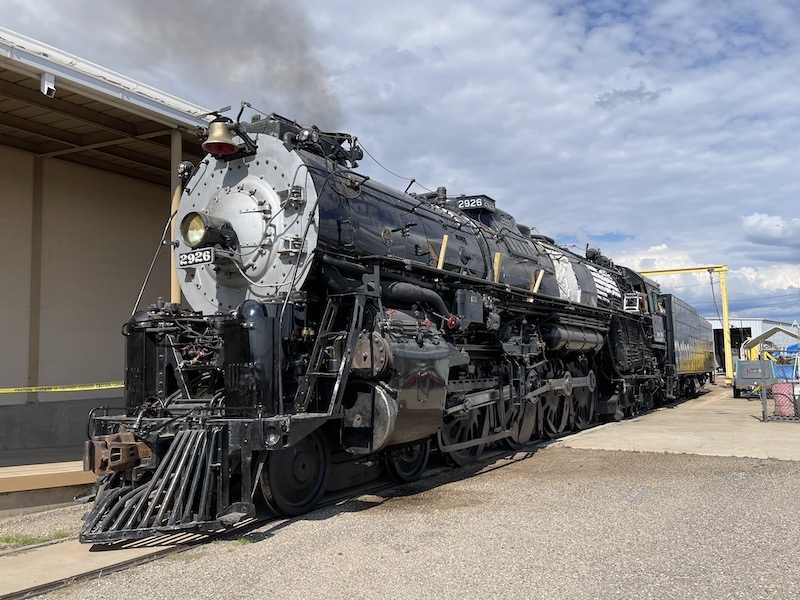 Santa Fe 4-8-4 moved under its own power for the first time this weekend following a 22-year restoration effort. Photo by Alex Gillman.

ALBUQUERQUE, N.M. — Atchison, Topeka & Santa Fe Railway 4-8-4 2926 ran under its own power this weekend for the first time since 1953, following an exhaustive 22-year-long restoration in New Mexico.

At 3:44 p.m. on Saturday, July 24, 2926 moved back and forth on a short stretch of track at the New Mexico Steam Locomotive & Railroad Historical Society’s facility. According to the non-profit, the move was observed by the Federal Railroad Administration and piloted by a professional crew.

“The movement was short; only a hundred feet or so back and forth since the engine was confined to operations only in the maintenance area of the spur,” the group wrote. “Nonetheless, it was a red-letter day for all the restoration crew, donors and fans who have supported the restoration effort these past 22 years since her purchase for $1 from the city in 1999.”

AT&SF 2926 was built in 1944 by the Baldwin Locomotive Works and was one of the last steam-powered passenger locomotives purchased by the Santa Fe. The locomotive was a speedster, capable of moving trains at 100 miles per hour and was primarily assigned to the Southwest. Fully loaded with fuel and water, the locomotive and tender weigh 974,850 pounds, making it the largest operating 4-8-4 locomotive in the United States today. The locomotive was retired in 1953 and later put on display in Albuquerque. The non-profit purchased the locomotive in 1999 and moved it to a restoration facility in 2000.

Over the last few years, the group had made big progress on the restoration and it had been steamed up, but not moved, multiple times. The group was on the verge of running the locomotive under its own power last year but the pandemic quickly shelved those plans. The year-long delay perhaps made Saturday’s successful run all the sweeter for the volunteers who worked so hard to restore the locomotive.