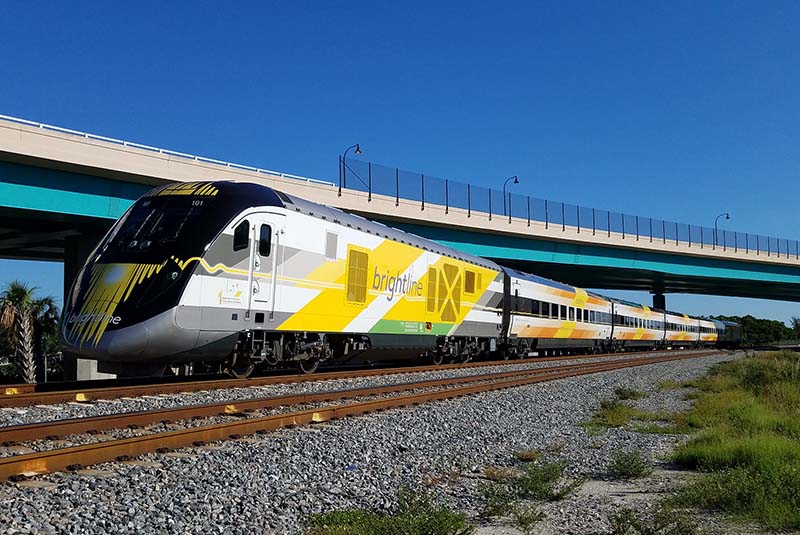 A Brightline train passes under the Dixie Highway at Deerfield Beach, Fla. in September 2018. Photo by Otto Vondrak.

But the future of Florida’s Brightline is not so clear. Late last week, the private passenger operator said it could be “months” before service returns. The service was first suspended in March.

“As South Florida starts its phased re-opening, the team at Brightline is monitoring current events and evaluating scenarios for providing passenger service. However, we do not anticipate resuming operations in the coming months,” the company tweeted. “Due to CDC social distancing guidelines, mandated work-from-home policies and other considerations, it is expected to take a long period of time for service demand to return to pre-virus levels.”

The company added that it remained committed to completing its long-planned extension to Orlando and that it would be welcoming passengers back “when the time is right.” Prior to the shutdown, Brightline was operating between Miami and West Palm Beach. It is the only privately owned and operated intercity passenger railroad in the country.

The ongoing coronavirus pandemic has had a major impact on passenger rail operators across North America and around the world. VIA Rail Canada announced earlier this month that it was suspending its two transcontinental passenger trains until November. Meanwhile, transit agencies from coast-to-coast have said they will need at least $33 billion, on top of the $25 billion Congress already gave them in the pandemic relief bill, to survive the year.