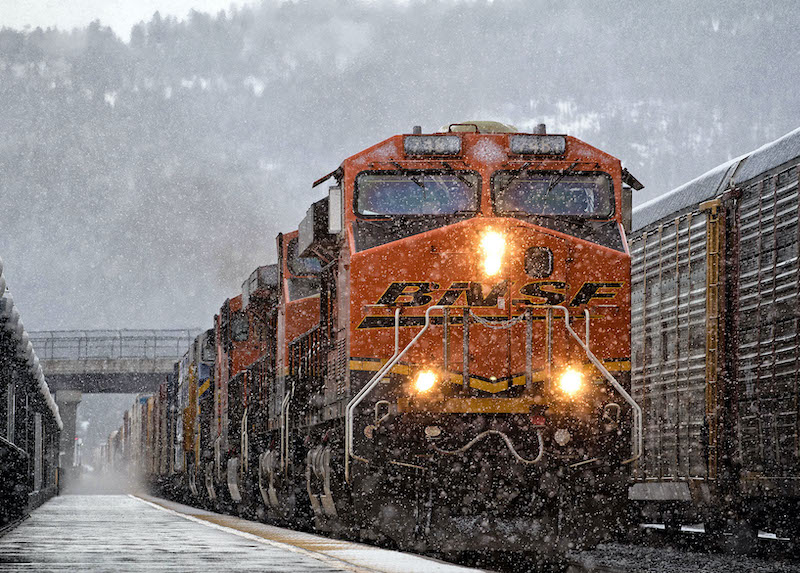 BNSF wants to institute a stricter attendance policy. Union officials call it the “most egregious” policy ever adopted by a railroad. Photo by Justin Franz.

CLEVELAND — Members of two of the nation’s largest rail unions are considering walking off the job over a new attendance policy being implemented by BNSF Railway. Union officials call it “the worst and most egregious attendance policy ever adopted by any rail carrier.”

The new “Hi-Viz” policy would institute a new point system for employees. They would lose points for various absences, including needing to take time off for a family emergency or funeral. In a joint statement from the two unions —  the Brotherhood of Locomotive Engineers and Trainmen and the Transportation Division of SMART — officials said it was particularly concerning that the railroad was coming out with this policy during a global pandemic.

In a memo sent out to its employees, BNSF said that they “must improve crew availability to remain competitive in the industry” and that their revised Hi-Viz program helps with this issue “by incentivizing consistent and reliable attendance.”

“Our members have simply had enough of the treatment they are enduring from the BNSF Railway,” said BLET National President Dennis Pierce and SMART-TD President Jeremy Ferguson. “The company’s half-baked attempt to characterize this policy as an ‘improvement’ and an ‘incentive’ is nothing short of disingenuous, and outright insulting.”

Union officials said that the new policy violated various bargaining agreements currently in place between labor and the railroad.

This week, BLET and SMART officials began polling members on whether or not they wanted to go on strike. If two-thirds of local members vote in favor of a strike, they could walk off the job in a few weeks. The unions represent more than 17,000 BNSF employees.

“BNSF team members drive the railroad’s success and we couldn’t deliver the nation’s goods without our employees,” said a railroad spokesperson. “BNSF has had attendance guidelines for more than 20 years.  This week, BNSF announced a new system that is designed to provide employees with real-time information and greater flexibility, so they can make informed decisions about their work schedules. These updates were made to be consistent with other companies while helping us safely and efficiently serve our customers and the communities that count on us.  We understand that change can be an adjustment, but working together with our employees, we believe we can adapt and adjust to meet today’s competitive freight environment.”