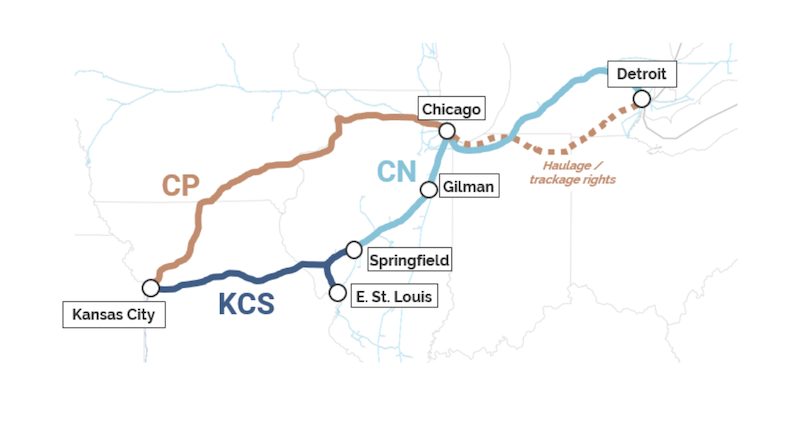 A map of what Canadian National wants: A Kansas City Southern line from Springfield, Ill., to Kansas City.

WASHINGTON — A flurry of filings with the U.S. Surface Transportation Board on Thursday offered hints at what three competing Class I railroads wanted in return for supporting the proposed Canadian Pacific-Kansas City Southern merger.

KCS’s scorned suitor, Canadian National, filed notice that it would like the STB to force CPKC to sell the KCS line between Springfield, Ill., and Kansas City as a condition of approval. CN said that would enable better competition between Chicago and Kansas City and would create parallel routes for the two Class Is (CN already has a line from Chicago to Springfield). CN would also like access to East St. Louis.

CP officials were quick to dismiss the request, stating that CN’s proposal “is built on a series of factual errors or misstatements.” CP said it was inappropriate to consider the KCS and CP lines as “parallel” because CP does not presently serve Springfield. It also noted that there is little interchange between CN and KCS at Springfield (in 2019, CN and KCS exchagned 113 cars there and in 2020, they interchanged just four, according to a CP press release).

Two other filings, one from BNSF Railway and another from Norfolk Southern, outlined trackage rights requests that the two railroads will likely ask for in the coming weeks. The STB has set a deadline of Februrary 28, for such requests. BNSF will likely ask for rights over the KCS line from Robstown to Laredo, Tex., between Metro, Tex., and Bossier City, La., and on a CP line between Savanna, Ill., and Clinton, Iowa. NS filed a comment stating that it would like to protect access to the “Meridian Speedway,” a joint venture it has with KCS between Meridian, Miss., and Shreveport, La. Specifically, NS stated that it would like to expand its access by being able to haul premium boxcar and automotive traffic. Presently, NS has a haulage agreement with KCS that limits what exactly it can move through the area.