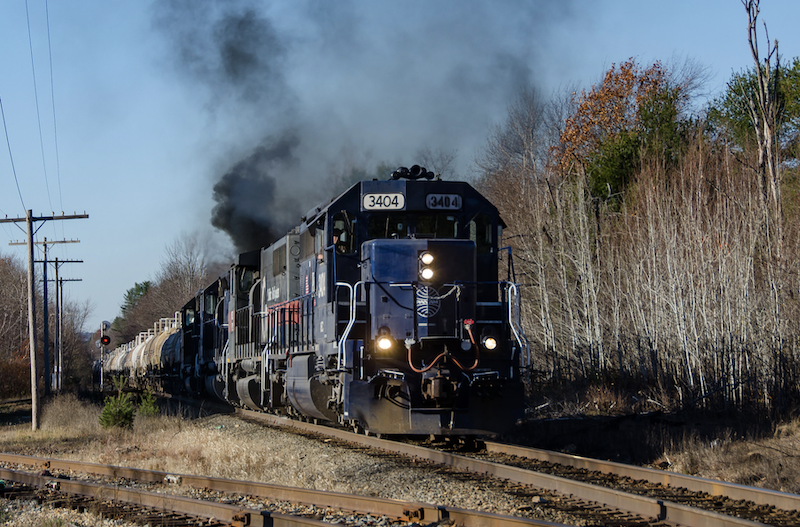 Amtrak and CSX have come to terms allowing the passenger railroad to support the Class I’s acquisition of Pan Am Railways. Photo by Steve Barry.

However, late in the day, Amtrak officials said it was still too early to say if they would support CSX’s plans and that there were still some sticking points.

“We are pleased that CSX has agreed to accept six of the seven conditions Amtrak requested to ensure that performance and expansion of Amtrak service are not harmed if the Surface Transportation Board approves CSX’s proposed acquisition of Pan Am Railways,” Amtrak officials said late Thursday.

Amtrak had previously opposed the CSX-Pan Am deal but now has gotten some concessions from the freight operators. Among them is a promise to prioritize Amtrak trains when dispatching; cooperate with potential service expansions on the former Boston & Albany between Worcester, Mass., and Albany, N.Y.; and upgrade the current Downeaster route in Maine with positive train control.

The proposed schedule of the Berkshire Flyer, between New York City and Pittsfield, Mass.

But perhaps the most visible part of the agreement was that CSX will permit the operation of a new train, the Berkshire Flyer, this summer. The train will run from New York City to Pittsfield, Mass., on weekends. Before service can begin, however, a 1,000-foot siding will need to be constructed in Pittsfield. The Berkshire Flyer to Pittsfield has long been in the works but an agreement on running it between CSX and Amtrak remained elusive — until now.

Amtrak officials said they were still reviewing the details of the Berkshire Flyer plan.

Amtrak is not the only railroad to be warming to the idea of a CSX-Pan Am takeover. Last week, Vermont Rail System announced it supported the deal after getting a trackage rights agreement. The only major entities that have still not supported the deal are the Commonwealth of Massachusetts and Canadian Pacific Railway.