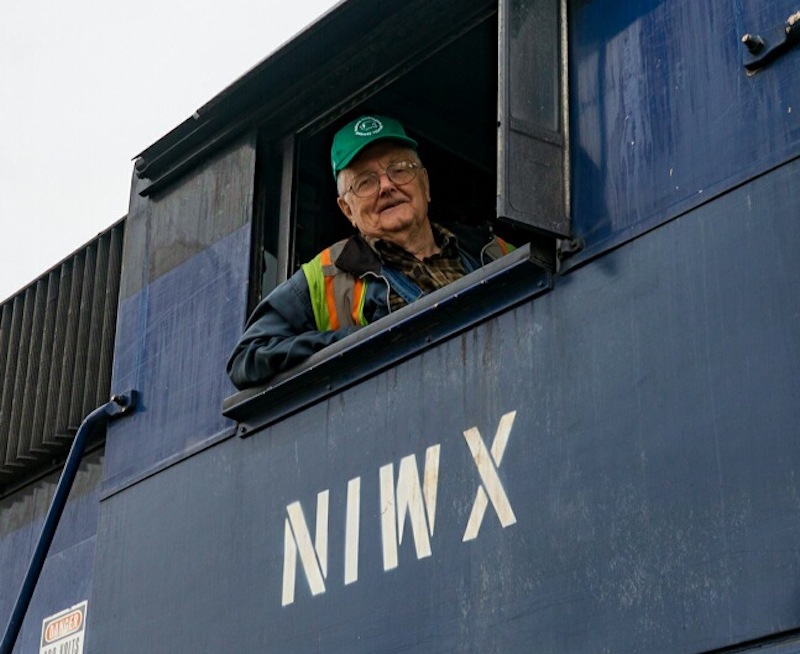 Bruce Butler at the helm of an Eastern Washington Gateway freight train. At 81 years old, Butler was likely one of the oldest railroaders still working in the country. Photo Courtesy of Bruce Butler.

SPOKANE VALLEY, Wash. — One of the oldest railroaders in America has pulled the pin following a career that stretches back to the 1960s. Bruce Butler, 81, of Spokane Valley, Wash., retired from railroading in December after spending much of his railroad career on the former Northern Pacific in the Pacific Northwest. His last run occurred on the Washington Eastern Railroad’s Gieger Turn on December 16, 2021.

Butler said he’s unaware of anyone older than him who was still working in train operations for a freight railroad.

“I suspect that at age 81 and a half, I am the oldest person in the United States employed in train operations under the Railroad Retirement Board system,” he told Railfan & Railroad recently. “However, I am quite certain that I can claim the title to be the only person left with an NP seniority date in any craft still operating trains on former NP trackage.”

Butler grew up in eastern Washington and first hired out on the railroad as a telegrapher and station agent in 1960, during a summer break from Washington State University. Butler remembers being told the importance of his job by another agent he worked under: “I want you to know train orders when you leave here,” the older operator said. “You can learn station work anytime, but if you screw up train orders people can be killed!”

“Needless to say, I was very impressed with this statement,” Butler said, adding that he worked hard to make sure he always got the orders right.

The young agent would work relief shifts throughout eastern Washington, northern Idaho and western Montana for the next few summers. One particularly memorable assignment was at Plains, Mont., in the summer of 1964. In June of that year, the Great Northern Railway main line over Marias Pass was taken out by a flood and so the GN was detouring trains over the NP.

In 1965, after Butler had graduated, he headed east and took a job as an “internal auditor” on the Rock Island. A perk of that job was being able to ride trains over much of the Rock’s 10,000-mile system. In 1967, he worked in the data processing department, where the Rock was using two new IBM mainframe computers. Butler later left railroading and headed back to the Pacific Northwest.

After 36 years away from the industry, Butler returned in 2006 when he hired on with Western Rail in Spokane, Wash., where he worked part-time as a locomotive engineer. At the time, the company was operating a short industrial spur. That spur would later be taken over Eastern Washington Gateway, which ran the former NP CW Branch from Cheney to Coulee City, Wash., one of the very branches Butler worked on in the 1960s as an agent. Just like the beginning of his railroad career, Butler would spend the next 15 years working on the extra board, running trains whenever he was needed to fill in. The Eastern Washington Gateway would later become the Washington Eastern Railroad.