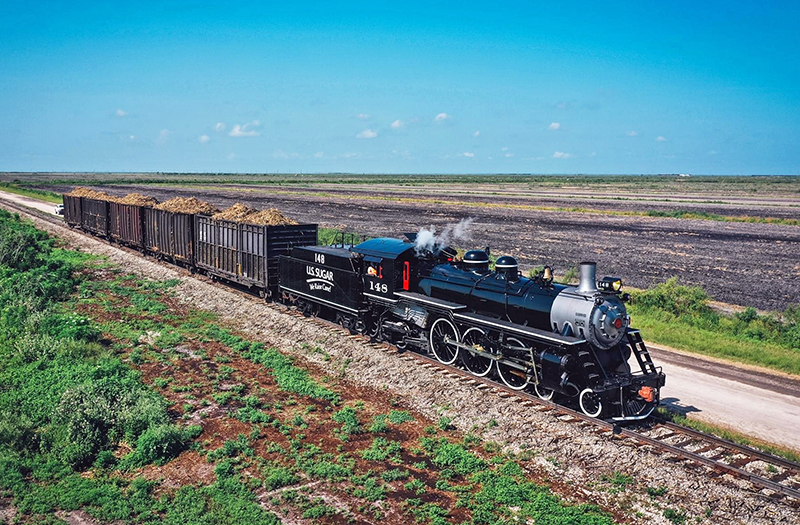 To mark the end of the sugarcane harvest, U.S. Sugar put newly-restored 4-6-2 148 in freight service this week in Florida. The company also announced that it would be eventually using the locomotive to haul excursions under the banner “Sugar Express.”

“U.S. Sugar’s restoration of Engine No. 148 has been a tremendous source of pride for our employees, who have worked tirelessly over the past 4 years to bring this steam engine back to life,” said Bob Lawson, general manager for U.S. Sugar Railroad Operations. “We look forward to the day when we can host members of the public on excursions to share our rich history with railroad enthusiasts, Florida residents and children alike.”

The restoration at U.S. Sugar is a homecoming of sorts for the classy looking Pacific. The oil-fired locomotive was built at Alco’s Richmond Works in April 1920 and worked in passenger service for FEC before being sold to U.S. Sugar in 1952. At U.S. Sugar, the locomotive moved sugar cane from the fields to a mill at Clewiston, Fla. After it was retired by US Sugar, 148 briefly returned to passenger service in the 1970s at New Jersey’s Black River & Western and Morristown & Erie. The locomotive saw a number of owners after that and spent time in Colorado, Michigan and Connecticut. In each instance, hopes to restore the locomotive to operation always faltered. In late 2016, U.S. Sugar repurchased the locomotive and brought it back to Clewiston for restoration. The restoration was completed in partnership with FMW Solutions, LLC.

“The pride that U.S. Sugar has in its heritage, and this historic symbol, in particular, is something truly exceptional in this day-and-age,” said Shane Meador, FMW Solutions Vice President. “We are honored to have worked with U.S. Sugar to complete the restoration of No. 148 and have been pleased with its performance during recent test runs.”

U.S. Sugar’s South Central Florida Express operates on more than 200 miles of track in central Florida, much it still used to haul cut sugar cane from field to factory, the last such operation in the country.