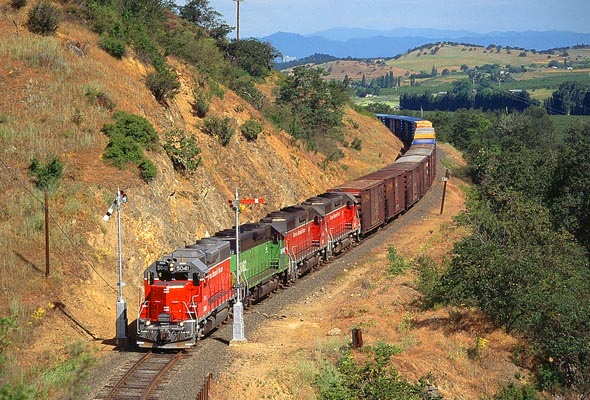 Central Oregon & Pacific Railroad (CORP) operations, on the former Southern Pacific’s Siskiyou line, between Springfield Junction, Oregon and Black Butte, California began on January 1, 1995. Six months into the new operation, on June 17, 1995, a southbound Montague Hauler is lead by GP38AC 5041 (ex-Conrail Leasing 305, Baltimore & Ohio 3841). The mixed consist of CORP GP38s and GP40s, including a former Burlington Northern GP40, splits a set of US&S Style B lower quadrant semaphores at Talent, Oregon. This was the beginning of rail service returning to the southern end of the Siskiyou line, between Ashland and Black Butte, after Southern Pacific embargoed it in 1992.

Southern Pacific’s Siskiyou Line stretches 300 miles from Springfield Junction, Oregon to Black Butte, California. This was SP’s original mainline between California and Oregon until the completion of the Cascade Line in 1926. The Siskiyou Line semaphores were placed into service between Ashland and Creswell, Oregon, around 1912 while the Cascade Line’s semaphores were installed in the 1920s. The Union Switch & Signal (US&S) Style B lower quadrant semaphores would remain in service on the Siskiyou Line, well after the Cascade Line upgraded to CTC and US&S searchlight signals in the 1940s. Semaphores on the Siskiyou Line continued to solider on protecting and controlling train movements for nearly 90 years before current railroad operator, Central Oregon & Pacific, began replacing them in 1998. The last working set of semaphores was removed in 2007. Join photographer Dan Sheets as we pay tribute to these fallen sentinels. 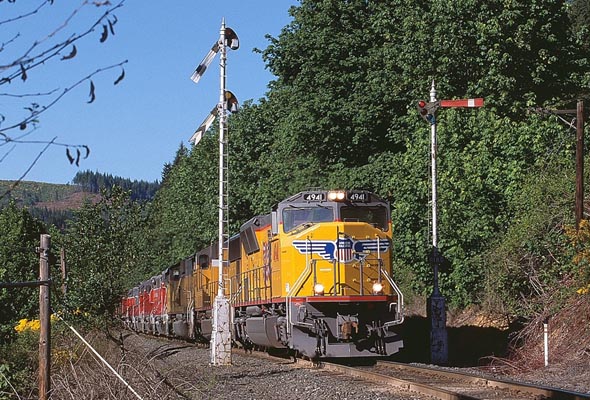 In early 2002, the first of Union Pacific’s SD70Ms with flared radiators arrive in Eugene, Oregon. One of these shiny, new EMD locomotives is added to the point of CORP’s Roseburg Hauler in July 2002. With a colorful consist of three armour yellow and five red CORP units, lead by UP 4941, the Roseburg Hauler rolls by a set of blades at Comstock, Oregon. 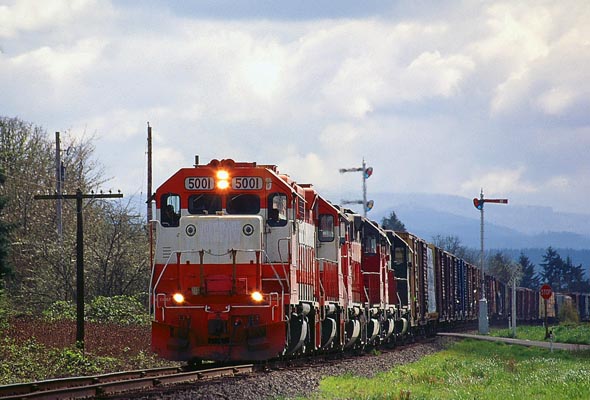 A northbound Roseburg Hauler, lead by ex-Colorado & Wyoming GP38-2s 5001 & 5002, splits the semaphores in Creswell, Oregon near the grade crossing at Davisson Road. The CORP train and its loads of lumber and lumber products is only ten rail miles from interchanging with UP at Springfield Junction on March 28, 1998. 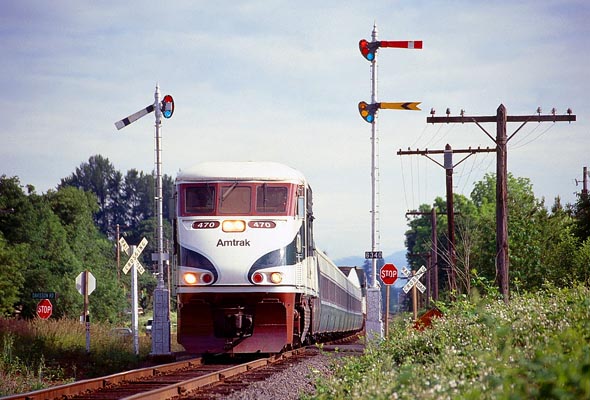 Was that a passenger train in Creswell?

In June 1999, Amtrak operated the Southern Oregon Exhibition passenger train special with Talgo equipment between Eugene and Ashland, Oregon on the Siskiyou Line. The purpose of the passenger train special’s visit was to generate interest in operating passenger rail service to cities along the Siskiyou including Ashland, Medford, and Roseburg. The first day of the special run began, on June 18, with two EMD F59s positioned on each end of the southbound Talgo trainset as it flies through Creswell, Oregon. 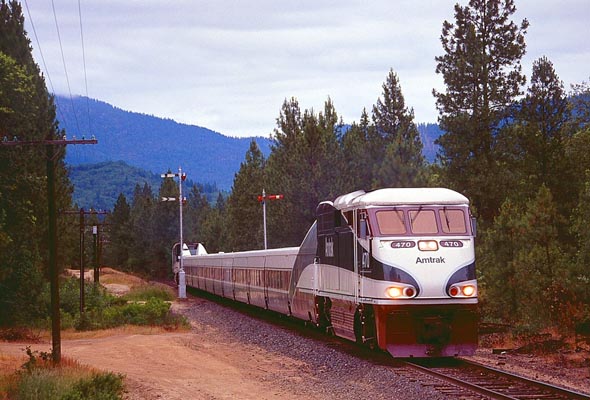 After spending the night in Glendale, Oregon, Amtrak’s Southern Oregon Exhibition train lead by Amtrak F59 470 starts day two of its trip to southern Oregon via the Siskiyou Line. Amtrak’s Talgo trainset, the “Mt. Olympus,” splits a set of semaphores at Merlin, Oregon on June 19, 1999. 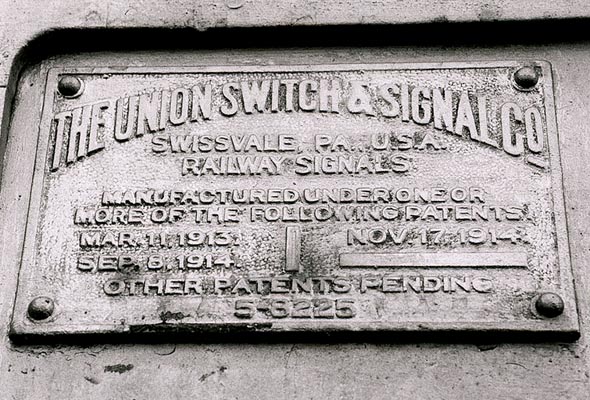 A Union Switch & Signal plate located on the outside of a semaphore case located near Talent, Oregon on February 23, 2002. Many of the semaphore installations have similar US&S plates that date back to around the first or second decade of the twentieth century. The last working set of US&S Style B semaphores was removed on Saturday, March 24, 2007 between Safley and Drain at Milepost 610.3. 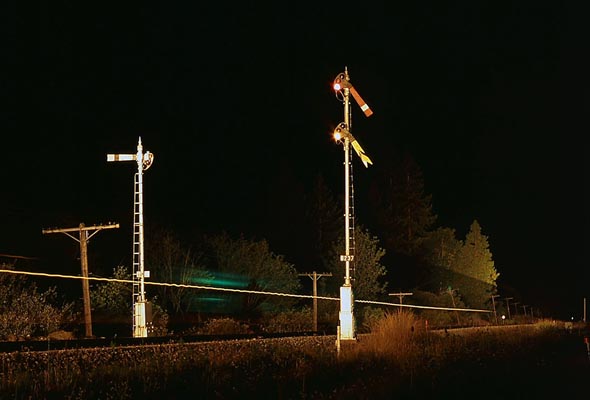 The ghost of the southbound Roseburg Hauler slips virtually undetected passed the semaphores just south of Cottage Grove, Oregon at 3:08 a.m. on July 21, 2001. The only illumination of the semaphores comes from the headlight of the invisible lead Union Pacific locomotive. 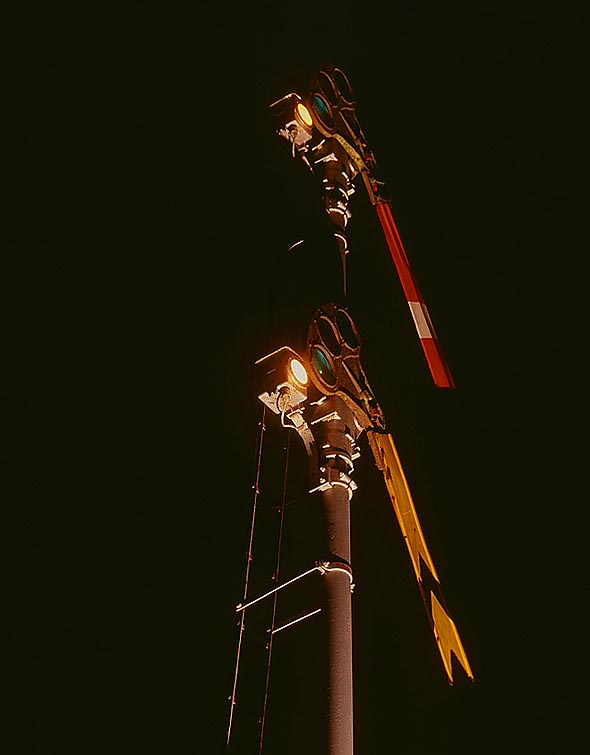 Six days after the shortest and darkest day of the year, on December 27, 1997, one set of semaphores located near Goshen, Oregon illuminates the night sky while waiting the approach of CORP’s Yoncalla Local.