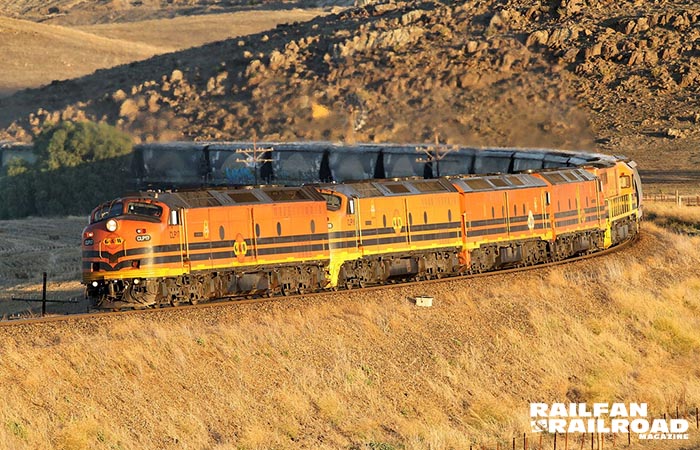 While all but vanished from American main line rails, streamlined EMD designs remain in daily use across portions of Genesee & Wyoming’s Australian operations. Loaded Genesee & Wyoming Australia grain train 2182s from Tailem Bend to Adelaide is seen climbing upgrade just outside the township of Callington behind units CLP17 CLP16 ALF24 CLP8 and FQO2 on February 10, 2015.

By Daven Walters/photos by the author

The GM Class were ordered and delivered in three batches by the Commonwealth Railways from the Australian EMD licensee Clyde Engineering Ltd of Granville New South Wales between 1951 and 1967. The first series GM1-GM11 were fitted with A1A trucks and were fitted with an EMD 16-567C engine. The units had the distinction of only being able to operate in multiple unit when back to back. Out of the eleven units built, GM’s 1, 2, 3 and 10 are still in existence with the rest of the class meeting the scrappers torch. GM10 is currently still in operation with the Southern Shorthaul Railroad based in New South Wales.

The second series of GM’s (GM12-GM36) were an updated version of the first series GM’s. These were the first members of the class to be fitted with Co-Co power bogies and they also had multiple unit socket on the front and the rear of the locomotives. Out of the second series of GM’s to be delivered from Clyde Engineering, only GM12, 18, 19, 22, 27 and GM36 are still with us today.

The third batch of GM Class units (GM37-GM47) were the only members of the class to be built with dynamic braking. This was to assist with the haulage of the then new Leigh Creek coal haulage contract from the Leigh Creek coal fields around Copley in South Australia’s north to the Northern Power Station, located just outside of Port Augusta in the near by township of Stirling North. The third series GM’s are the only members of the class, still in active service with Genesee & Wyoming Australia. The active members of the class are GM38, GM40, GM42, GM43, GM45, GM46 and GM47. GM47 has the distinction of being the last F-type unit built in the world.

The CL Class were the only streamline units to be built fitted with a 16-64E turbo charged engine. These units were delivered to the Commonwealth Railways by Clyde Engineering of Granville New South Wales between 1970and 1972. A total of 17 units (CL1-CL17) were delivered. CL17 has the distinction of being the last EMD streamliner carbodies built in the world. During 1992 and 1993 the seventeen members off the class were sold to Morrison-Knudsen Australia to be rebuilt and upgraded with modern computer control systems and an upgraded 16-645E3B engine. The units were then leased back to Australia National. The rebuilt CLP class were fitted with two Cummins HEP unit sets for power when hauling The Ghan between Adelaide, South Australia, and Alice Springs in the Northern Territory and the Indian Pacific passenger train between Sydney, New South Wales, and Perth, Western Australia. The class would also later haul the Overland passenger train between Adelaide, South Australia, and Melbourne, Victoria, once the Melbourne to Adelaide line had been converted from broad gauge to standard gauge. The regauged line was opened to traffic in May 1995.

The last streamliner built in the world CL17 would emerge from rebuild as CLP15. Unfortunately it would be badly damaged in a serious accident at Mount Christie on the Trans Australian Railway in northern South Australia during 1997. The unit was deemed uneconomical to be repaired and was later scrapped in Port Augusta. 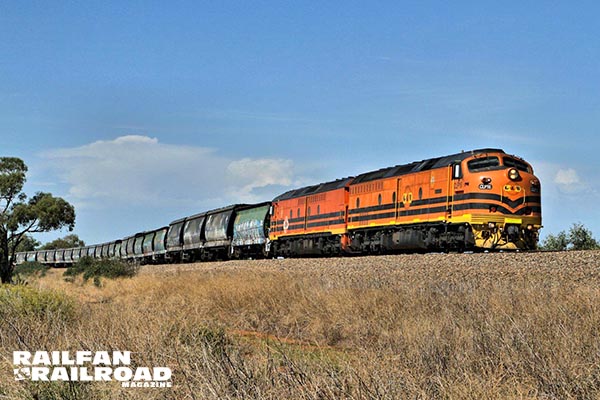 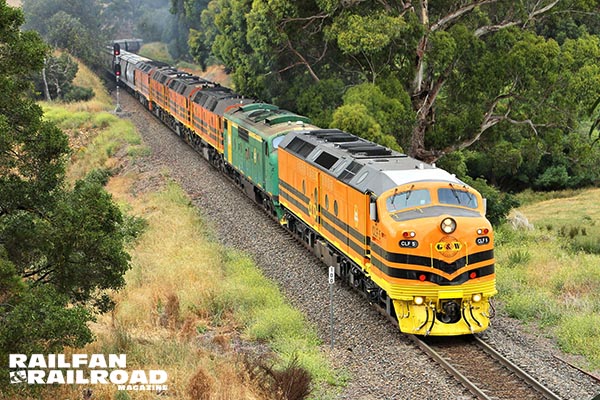 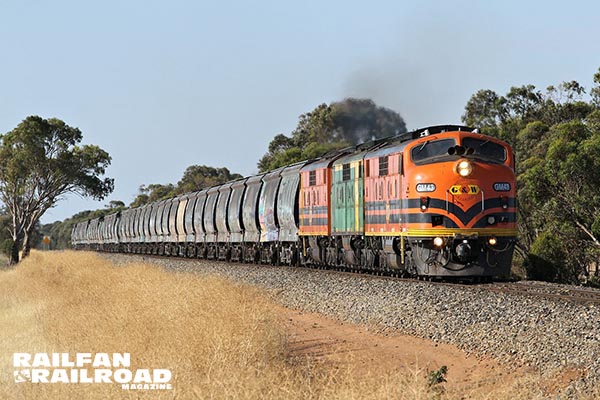 Bulldogs on the Loose

The lusty chant of three roots-blown EMD’s can be heard as GWA “bulldogs” GM43 and GM38 and GM47 (the last streamlined EMD carbody built in the world) power loaded Gladstone grain service train no. 5114s just to the east of the township of Mallala on December 14, 2014. 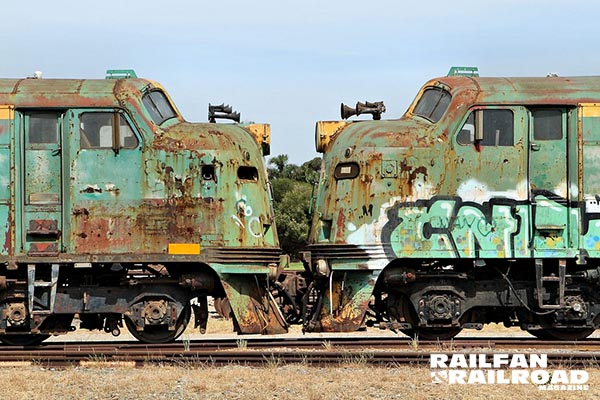 After not seeing service for many years, the last two non dynamic braked GM Class units GM34 and GM32 are seen on their final journey on rails on October 23, 2014. They were moved from the storage tracks in Dry Creek South Yard to the GWA Motive Power Centre a short distance away to be stripped of their remaining useful parts before being sent to a local scrap merchant. 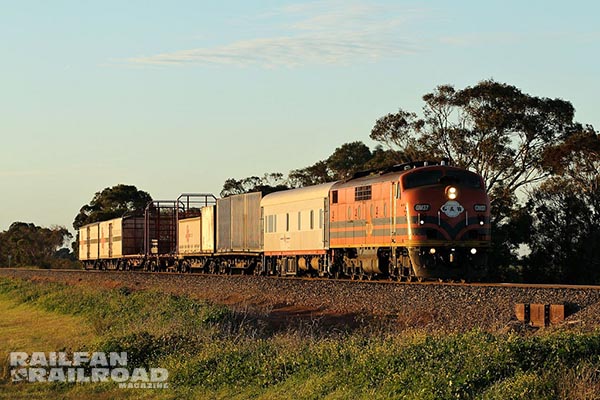 Built by Clyde Engineering for the Commonwealth Railways in the late 1960’s, the last series of the GM Class (GM37-GM47) were also the only members of the class built with dynamic braking as these units were built to haul the Leigh Creek coal train between Port Augusta and Leigh Creek in South Australia’s Far North. Here we see the first of the last batch GM37 leading SCT logistics service train no. 4172s from Port Augusta to the SCT Logistics depot at Penfield in northern Adelaide on July 3, 2014. 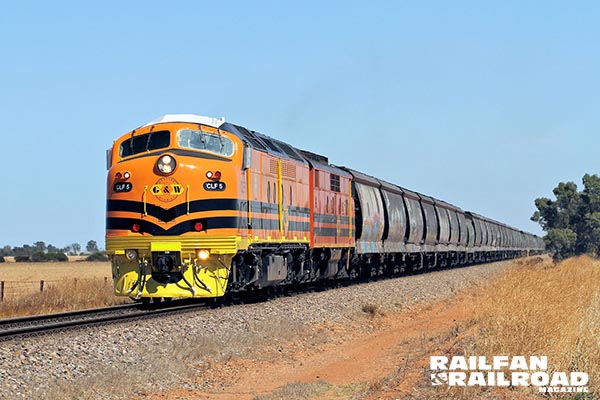 Back to Back from Bowmans

Back to back “bulldogs” CLF5 and GM47 are seen powering loaded Genesee & Wyoming Australia grain service train no. 4152s from Bowmans to Adelaide between the townships of Long Palins and Mallala on November 21, 2014. 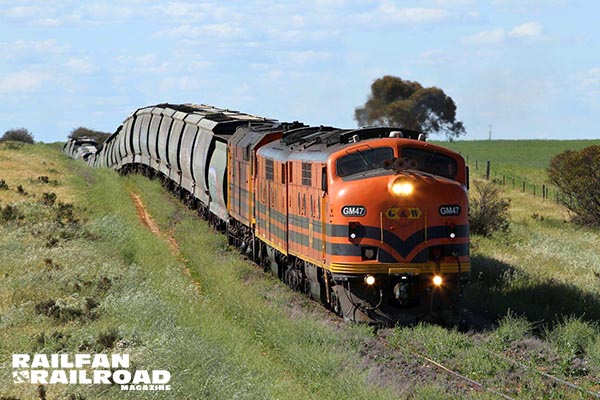 With the distinction of being the last F-type unit built in the world, GM47 leads fellow streamliner GM43 and ALCo 703 and they work loaded Genesee & Wyoming Australia Loxton grain service over the roller coaster grades at Pata between Loxton and Allawoona in the state’s Mallee region on August 31, 2013. 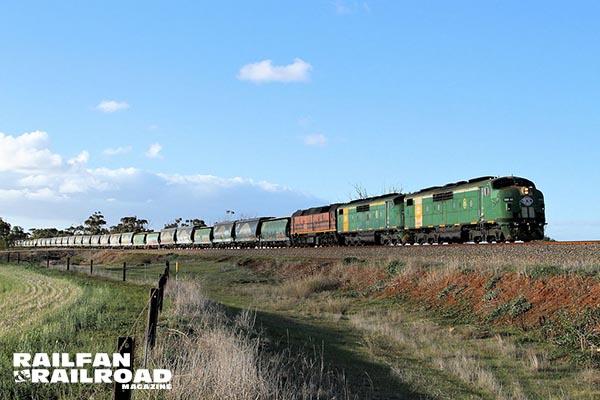 Elephant style bulldogs GM40 and GM38 lead box cab 2214 as they power loaded Genesee & Wyoming Australia grain service train no. 5114s from Gladstone in the South Australia’s mid-north around the Korunye S-curves between Mallala and Two Wells on May 3, 2014. 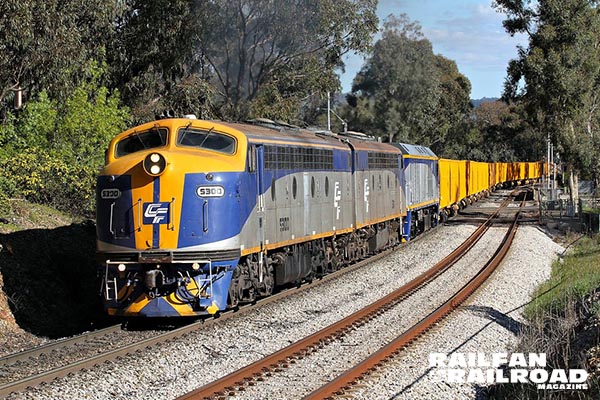 Built for the Victorian Railways between 1957 and 1962, streamliners S300 and S311 lead CM30-8 model GE EL53 lead Chicago Freight Car Leasing Australia rolling stock transfer special train no. 9L65 from Adelaide to Canberra and is seen passing the the Adelaide Hills suburb of Glenalta on September 19, 2014.