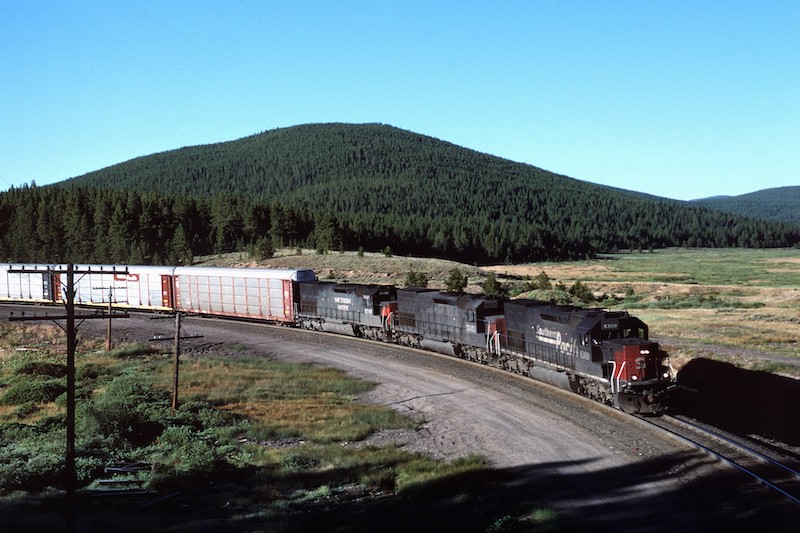 A train heads down the west slope of Tennessee Pass during the final months of operation in 1996. Photo by Jeff Simley.

WASHINGTON — The company trying to lease the former Denver & Rio Grande Western route over Colorado’s Tennessee Pass has told the U.S. Surface Transportation Board that they have no plans to move coal, crude oil, or any other hazardous material over the rugged mountain railroad.

On March 15, Colorado, Midland & Pacific Railway Company, a subsidiary of Rio Grande Pacific, filed an unusual motion to amend its original application for common carrier status to prohibit it from moving coal or crude on the line.

“In so doing, CMPR will be authorized only to transport passengers and general commodities, except crude oil, coal and hazardous commodities over the Line,” the company wrote. “While limitations on the scope of the commodities to be handled are not usually imposed, they are not unique.”

Ever since Colorado Midland & Pacific Railway announced plans to lease the line from Union Pacific, local communities have raised concerns about what the railroad plans to move. Parent company Rio Grande Pacific has been hired to operate the yet-to-be-built Uinta Basin Railway in Utah, which has been proposed to tap into oil reserves in eastern Utah. Because of that connection, many have assumed that the company wanted to use the Tennessee Pass route to move crude. But in February, the railroad told a local county commission it had no plans to move oil.

In its amended statement to the STB, railroad officials noted that it would be “impractical” to run loaded crude oil trains over Tennessee Pass, a line that includes 11 miles of 3 percent grade.

Since the announcement back in December that Rio Grande Pacific wanted to lease the line, the STB has been flooded with comments, many in objection to the plan. Some of the comments are from a competitor, Colorado Pacific, who wants to buy the line, and others are from conservation and community groups concerned about the potential for rail service to return.

A short section of the east end of the Tennessee Pass line through the scenic Royal Gorge, is operated by a short line, Rock & Rail, and a tourist carrier, Royal Gorge Route Railroad. However, the vast majority of the line has been dormant since 1997.