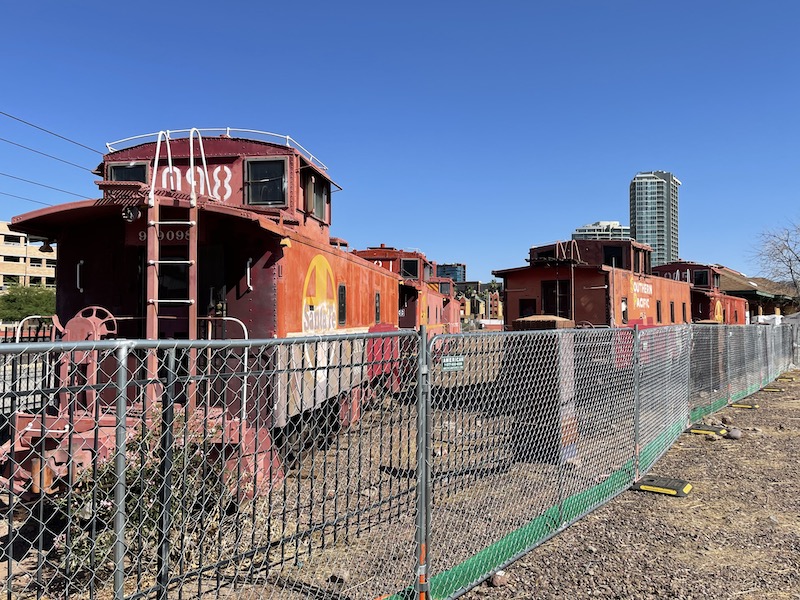 Five historic cabooses have been moved in Tempe, Ariz., to make way for new development. Photo by Marc Pearsall.

TEMPE, Ariz. — Five historic Santa Fe and Southern Pacific cabooses that were once part of a popular Arizona cantina have been moved to make way for new development.

An iconic landmark in Tempe for decades, Macayo’s Depot Cantina, located in the former Southern Pacific Tempe passenger depot, permanently closed last year. In 2019, the Johnson Family, owners of the chain, sold the Macayo’s brand and most of its restaurants to Kind Hospitality, but retained ownership of the now-closed Woody’s Macayo in downtown Phoenix and the now-closed Depot Cantina. Closure was planned in late 2019, just before the COVID-19 pandemic swept the nation and challenged the hospitality industry catastrophically for over a year.

Ever since the closure of the Macayo’s Depot Cantina, adjacent to both the Union Pacific’s ex-SP trackage and the Valley Metro Light Rail, speculation has run rampant over the eventual fate of the five authentic railroad cabooses — four originally from the Santa Fe and one ex-Southern Pacific — that had been “stuffed and mounted” around the station site as commercial and office space. Concern mounted after massive hi-rise redevelopment plans were announced in January 2021 for the location.

Finally, after months of speculation and conjecture, the answer suddenly came in late May and early June 2021, as a fleet of cranes and trailers pulled up to the site and removed all five cabooses to be relocated to new owners and locations.

Atchison, Topeka & Santa Fe 999005 (Class Ce-1, built by AC&F in 1930 as 1937; rebuilt 1965) will remain with the family that owned Macayo’s Depot Cantina in Tempe and moved to an undisclosed private location, to be stored. The original interior had been removed and refurbished into a working office complete with power, light and air conditioning. 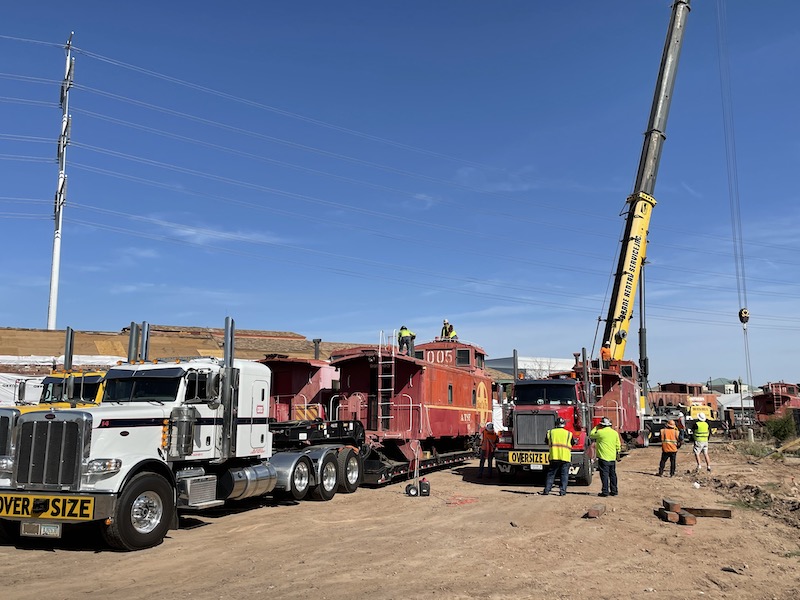 Cabooses being moved in Tempe, Ariz., earlier this month. Photo by Marc Pearsall.

ATSF 999281 (Built by Santa Fe Railway 1949 as 519, rebuilt 1965) was sold to Desert Diamond Distillery in Kingman. Original interiors from 1949-1965 had been removed and refurbished into empty space complete with power, wall paneling, light and air conditioning. The distillery also recently opened a heavyweight ex-ATSF 1918 as a restaurant.

Southern Pacific 1099 (SP Class C-40-3 Cupola Type, built 1940-1942) was donated by Macayo’s owners to the Arizona State Railroad Museum Foundation in Williams. The original interior had been removed and refurbished into a working office Tentative plans by the ASRRM Foundation are to use the car as temporary office space until construction of permanent structures can be completed.