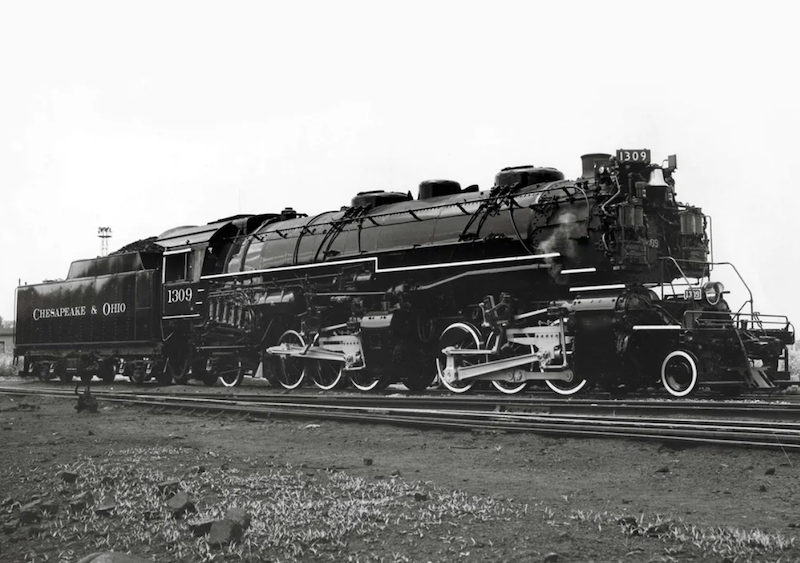 RIDGELEY, W.V. — The John H. Emery Railroad Heritage Trust made a special $50,000 donation to the Western Maryland Scenic Railroad to help complete the restoration of Chesapeake & Ohio 2-6-6-2 1309. The trust normally only gives out donations once a year — and in March the WMSR was the recipient of a $10,000 donation — but this grant was given in an effort to push the long-awaited restoration toward the finish line.

Locomotive 1309 has been under restoration at the Western Maryland Scenic’s shop in Ridgeley, W.V. since 2014. While the railroad has made significant progress in recent years, the effort has been marked by setbacks, including fundraising struggles and the theft of key parts. Earlier this year, work resumed on the locomotive and this summer the wheels were put back under it. The locomotive has been fired up but it has not moved under its own power. No timeline has been given for when the locomotive will be running under steam, but officials have said it is getting closer to completion every day. The railroad is asking for donations to help finish the much-anticipated restoration.

Like many tourist railroads, this year has been a tough one for the WMSR. In June, it moved out of the historic Western Maryland depot in Cumberland to save money and it does not expect to resume operations until the fall. Officials have said the railroad is in “survival mode.” Despite the struggles, continued work on 1309 has served as a bright spot for the railroad.

John H. Emery was a Chicago-native and lifelong railroad enthusiast who created the trust to fund projects that preserve the “Golden Age” of passenger railroading, specifically the years between 1920 and 1960. The trust is particularly interested in projects that allow the public to ride historically significant pieces of equipment. Groups are able to submit grant proposals up until Feb. 1, each year and then a three-person committee reviews the proposals.