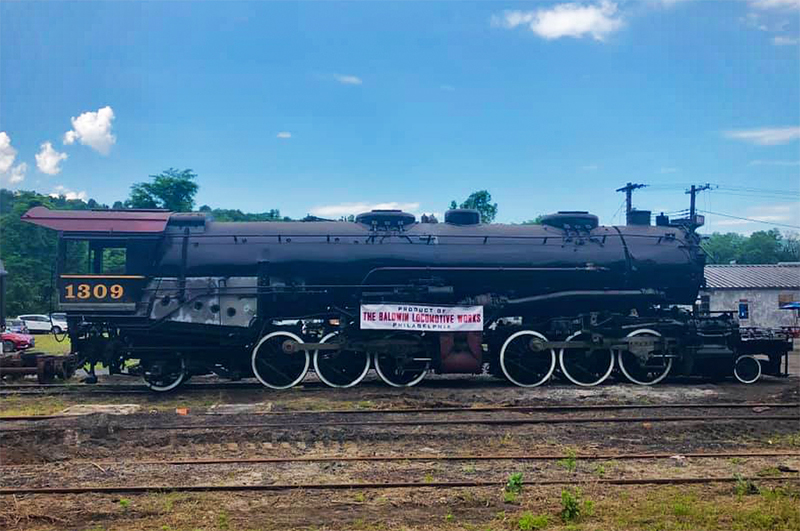 RIDGELEY, W.V. — Two big articulated steam locomotives were on the move on the east coast on Wednesday. In Ridgeley, W.V., the Western Maryland Scenic Railroad put the driving wheels back under Chesapeake & Ohio 2-6-6-2 1309, a major step forward for the restoration that has seen progress in fits and starts in recent years. Meanwhile, three hours south in Roanoke, Va., Norfolk & Western 2-8-8-2 Y6a 2156 began its long-awaited journey home to St. Louis after being on display at the Virginia Museum of Transportation since 2015.

Locomotive 1309 has been under restoration at the Western Maryland Scenic’s shop in Ridgeley since 2014. While the railroad has made significant progress in recent years, the effort has been marked by setbacks, including fundraising struggles and the theft of key parts. Earlier this year, work resumed on the locomotive and on Wednesday the driving wheels were put back under the boiler for the first time since it left B&O Museum in 2014. No timeline has been given for when the locomotive will be running under steam, but officials have said it is getting closer to completion every day. The railroad is asking for donations to help finish the much-anticipated restoration.

Just a few hours after 1309 was rolled back into the shop in Ridgeley on its own wheels, N&W 2156 was rolling out of Roanoke in the rain. The 2-8-8-2 arrived in the city of its birth in 2015 to be reunited with two other N&W-built locomotives, 4-8-4 Class J 611 and 2-6-6-4 Class A 1218 as part of a five-year lease between the locomotive’s owner, the Museum of Transportation in St. Louis, and Virginia Museum of Transportation. While efforts were made to try and extend the lease to keep 2156 on its home territory, those negotiations ultimately failed. On Wednesday, 2156 left town behind a Norfolk Southern diesel for what is expected to be a four-day journey back to Missouri where it will be put back on display.

Once restored, C&NW 175 will join SRI’s Pere Marquette 2-8-4 in excursion service in Michigan.

The iconic narrow gauge railroad had delayed its season opener by three weeks due to fire danger in the southwest.