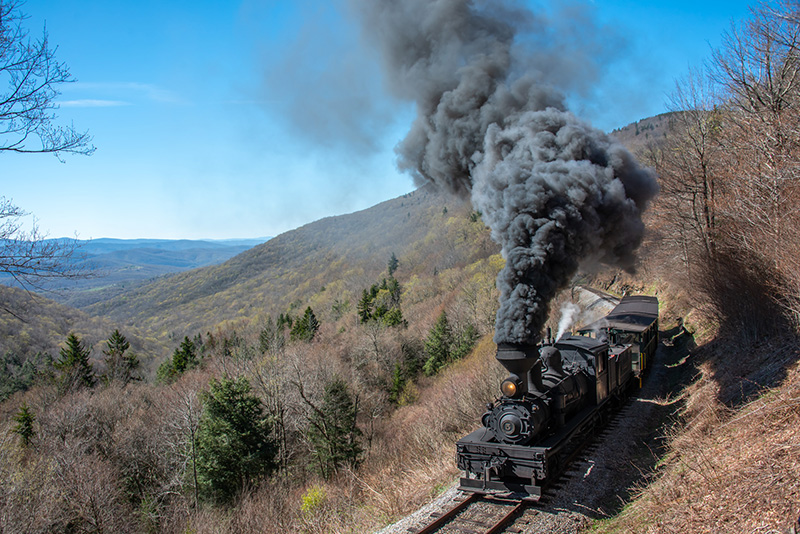 Cass Shay 5 leads a passenger consist at Spruce, about halfway up the mountain from Cass. Photographers on the Lerro charter rode the passenger train, while Shay 4 powered a logging train. The town of Cass is out of sight down in the valley.

Story and Photos by Steve Barry

Cass Scenic Railroad, located deep in the mountains of eastern West Virginia, has been hauling tourists instead of timber for over 50 years. The railroad served the forests that were harvested by Mower Lumber Company until 1960; today, the railroad and the company town of Cass make up a West Virginia state park. Shay locomotives were used by the Mower operation, and Shays form the backbone of the current Cass fleet. Starting in 2015, the Cass railroad operations were leased to the Durbin & Greenbrier Valley Railroad.

Over the years, numerous photo charters have been held at Cass by a variety of operators. The Mountain State Railroad & Logging Association held the popular Cass Railfan Weekend in May for many years, and other operators have chartered the railroad for events. On May 1, 2021, Lerro Photography sponsored its first Cass photo charter, with a second day on Durbin & Greenbrier Valley’s line on the former Chesapeake & Ohio out of Durbin. Two Shay locomotives were used the first day, with a Heisler used the second day; all three locomotives were lettered for predecessor roads.

The Cass line goes to the top of Bald Knob, the third-highest mountain in West Virginia, but the Lerro charter only went as far as Old Spruce, about halfway up the mountain. From there, the charter went down a connection to the site of the former town of Spruce, located on the former Western Maryland (and now also part of Durbin & Greenbrier Valley) and out onto the ex-WM a short distance. For the second day, the trip originated out of Durbin on the old C&O and headed south. This line, which passed through Cass and joined the C&O main line at Ronceverte, was washed out in a 1983 flood. Working both south from Durbin and north from Cass, the route is now one bridge replacement away from being a through-line between the two towns again. 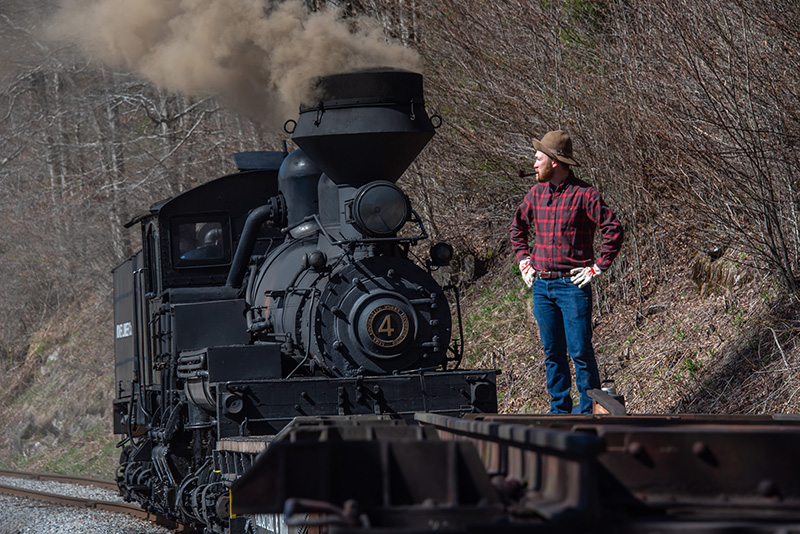 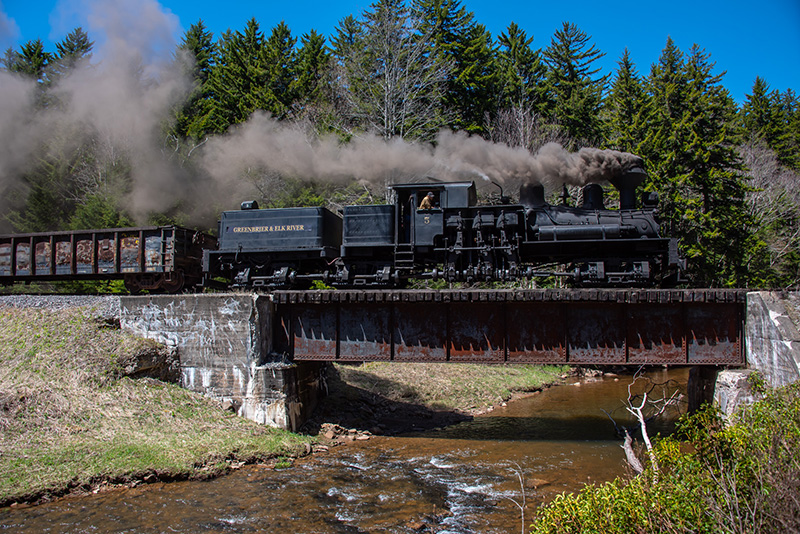 Shay 5, lettered for Greenbrier & Elk River, has swapped its passenger consist for a freight train on the ex-Western Maryland. While Cass Shays have been relettered for charters in the past, this was the first time striping on the tender was covered with black gaffer tape to give a more “in service” appearance. 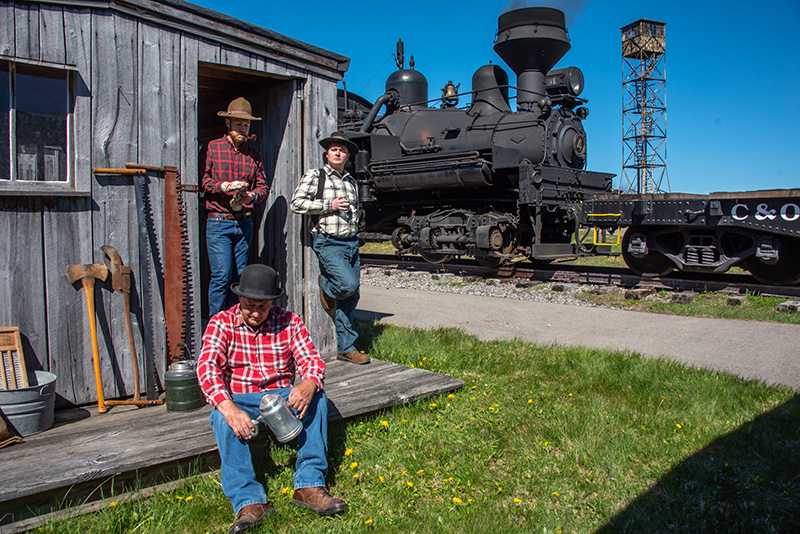 A display of logging equipment at the old base camp at Whittaker provided props for a photo stop including an old bunk house and tools of the logging trade.

The night photo session at the reproduction C&O depot in Cass was punctuated by fireworks set off by locals across the Greenbrier River in East Cass. The original C&O depot, like many other structures at Cass, fell victim to arson. 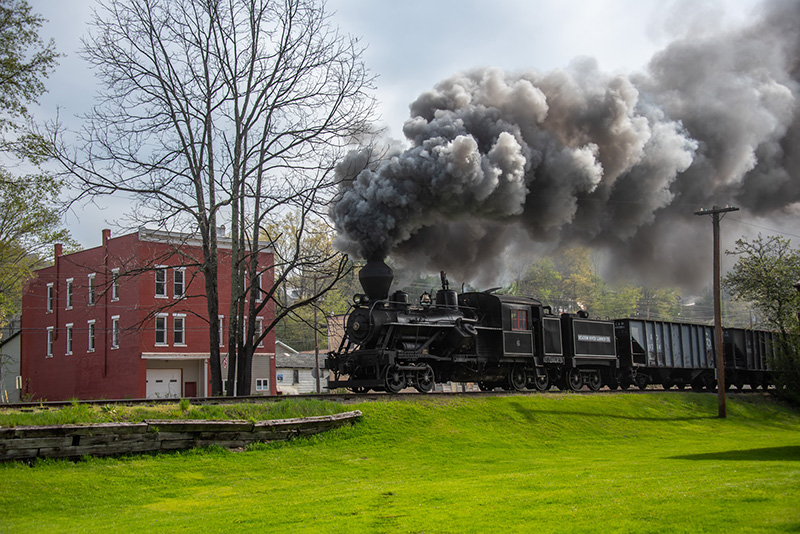 Cass Heisler 6 has been moved to the Durbin & Greenbrier Valley at Durbin and was used on the ex-C&O for the second day of the charter. Lettered for Meadow River Lumber Co., the Heisler’s first runby of the day was in downtown Durbin. 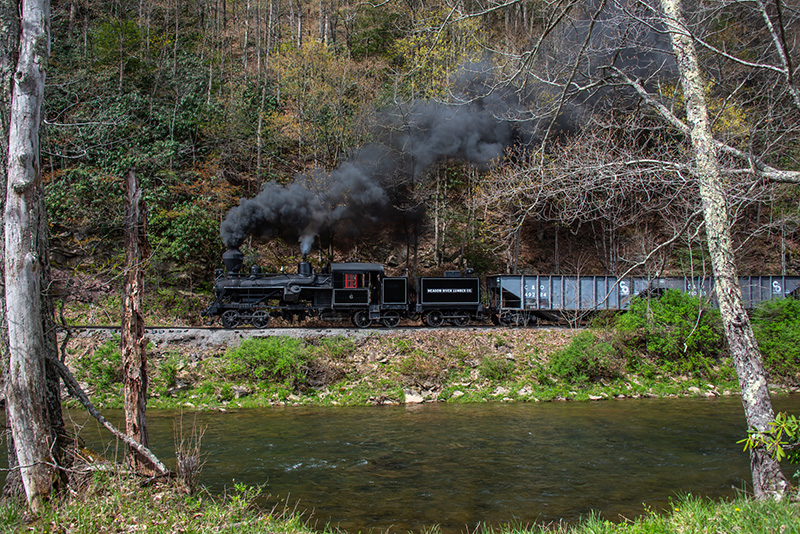 The C&O’s Greenbrier line hugs the river of the same name. Heisler 6 led an attractive freight consist for the day. 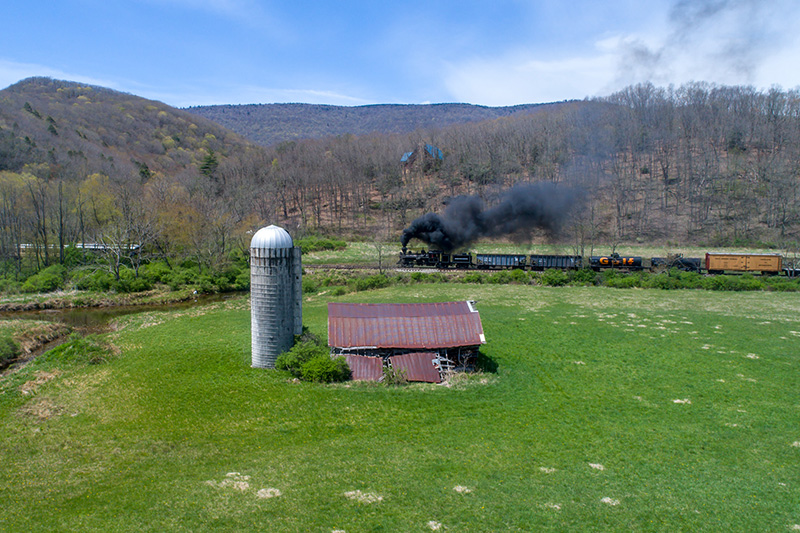 The Greenbrier Valley widens in a few places, including at Hosterman where a farm occupies the grassy wide spot. 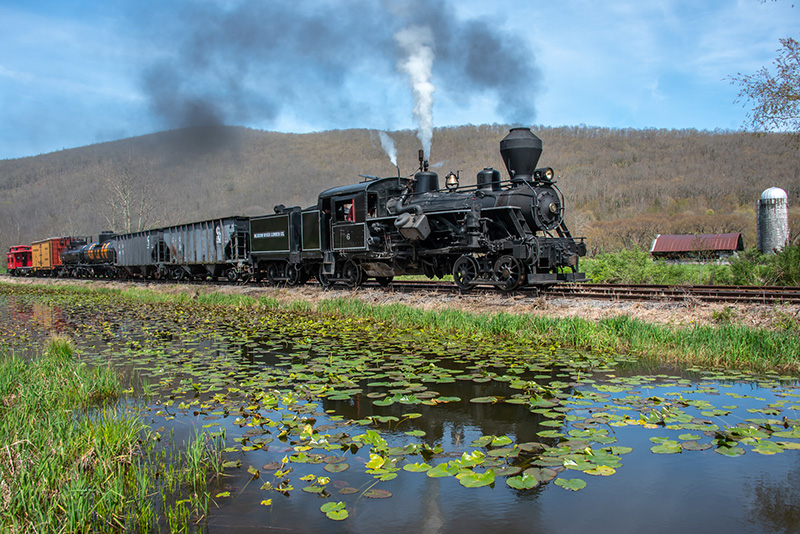 Hosterman also has a large pond that was used to showcase the photo freight. 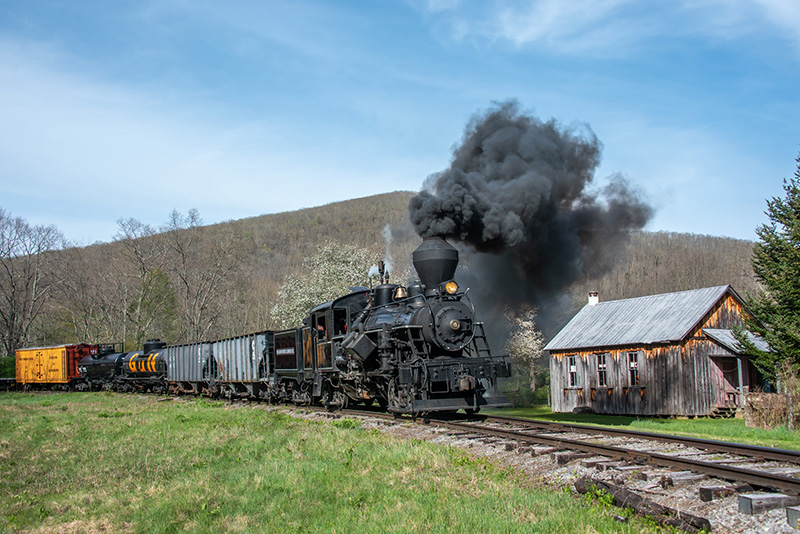 Another wide spot along the Greenbrier is at Nottingham, where one house and what appears to be a schoolhouse are located. Heisler 6 put on a good show during several runbys along the route during the day.