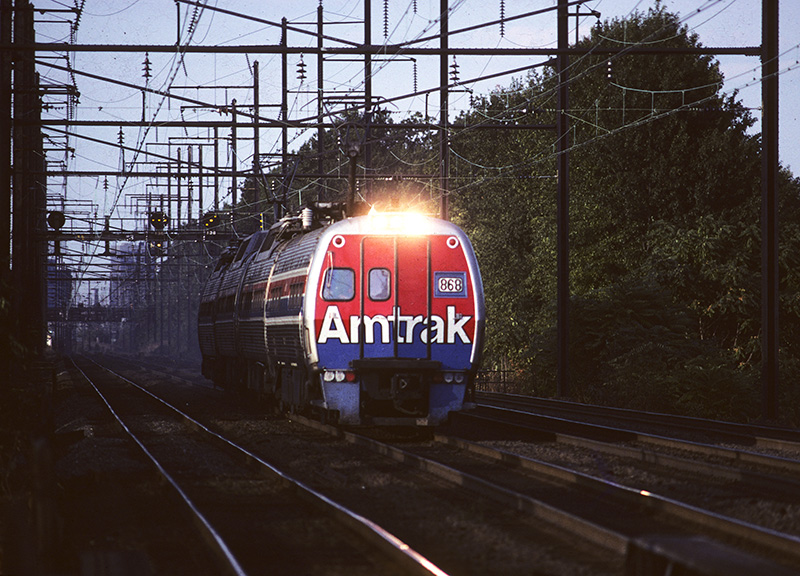 In the 1970s, founding Railfan & Railroad Editor Jim Boyd was trackside capturing the early days of American’s national passenger railroad. A set of Metroliners inherited from Penn Central race down the Northeast Corridor towards Washington, D.C., at dusk in September 1980.

Amtrak assumed operation of the nation’s remaining passenger rail services on May 1, 1971, ushering in a new era of public stewardship and transitioning away from private operation. In the 1970s, founding Railfan & Railroad Editor Jim Boyd was trackside capturing the early days of Amtrak as it took discarded services and equipment from 20 different railroads to form the national network we know today. To celebrate Amtrak’s 50th anniversary, we dug into the archives for a look at the first decade of America’s passenger railroad. —Justin Franz 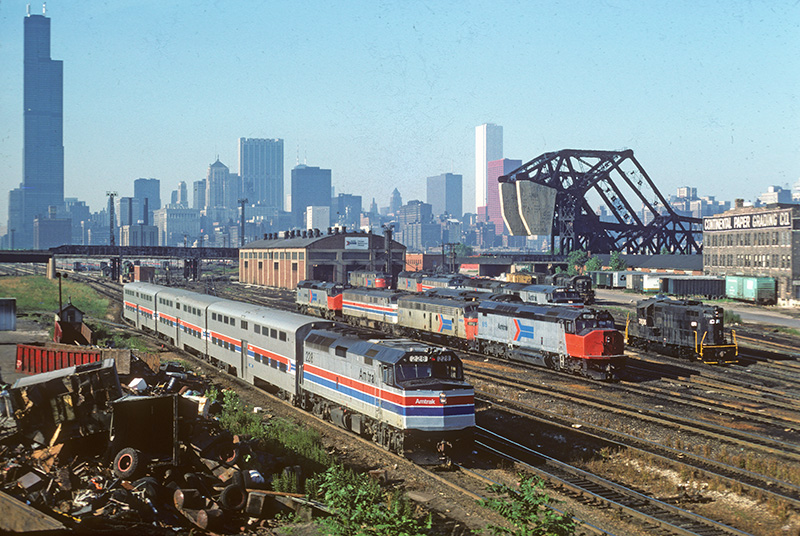 One of Every Type

F40PH 228 leads the Illinois Zephyr out of Chicago, passing Amtrak’s locomotive facility just south of Union Station, which on this day features a hodgepodge of motive power, including Amtrak F45s and E-units, a P30CH and some Conrail EMDs and Alcos. 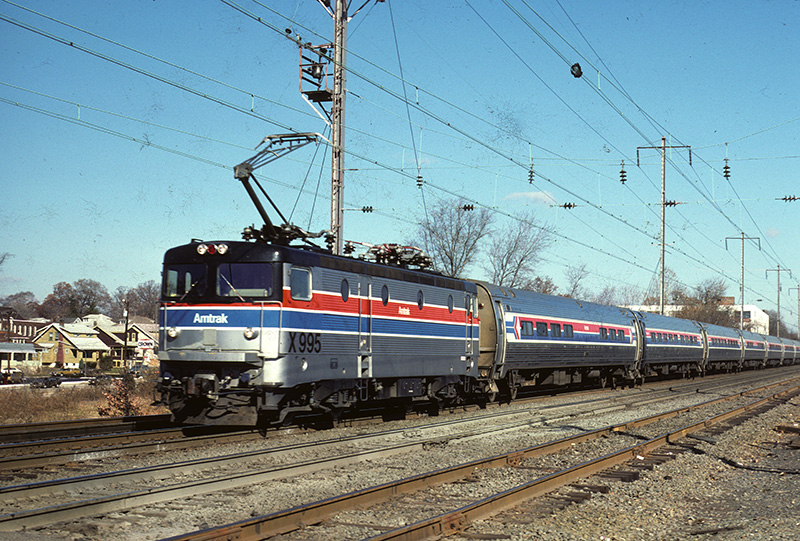 In 1976, Amtrak tested French and Swedish locomotives on the Northeast Corridor in an effort to find a replacement for the iconic GG-1 electrics, originally built for Pennsylvania Railroad. Locomotive X995 was built by Allmanna Svenska Elektriska Aktiebolaget — seen here leading a train on the Northeast Corridor in November 1976 — and was the inspiration for the AEM-7 built by EMD between 1978 and 1988. 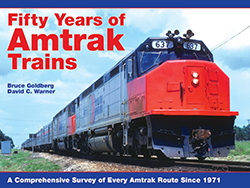 Celebrating the milestone of Amtrak’s 50th anniversary, this 256-page volume presents a thorough summary of every Amtrak route, coast-to-coast, past and present, featuring detailed tables surveying train schedules and station stops at ten-year intervals. The book is generously illustrated with color and black-and-white photographs (many previously unpublished), along with colorful brochure art and several detailed route maps. It’s a history of Amtrak like no other! Order your copy today!

The Chief on Edelstein Hill

SDP40F 524 leads Amtrak’s Super Chief on Edelstein Hill north of Peoria, Ill., in the early 1970s. In 1974, the train was renamed Southwest Limited after Santa Fe revoked Amtrak’s permission to use the Chief name because of a decline in service. In 1984, with the delivery of new equipment, the Santa Fe once again allowed Amtrak to use the iconic name and it was rebranded the Southwest Chief. 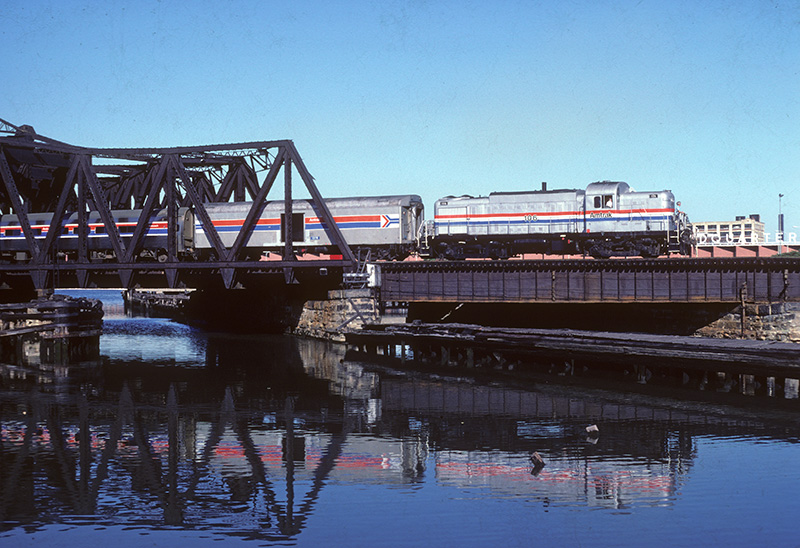 A Rebuild in Boston

Amtrak RS3m 106 is seen switching cars near South Station in Boston in July 1982. This locomotive was built as New York Central 8263 in July 1951 and later ended up on the Penn Central roster before joining Amtrak. Amtrak rebuilt the locomotive in the late 1970s or early 1980s with a 567 prime mover, replacing the more unreliable 244 motors. 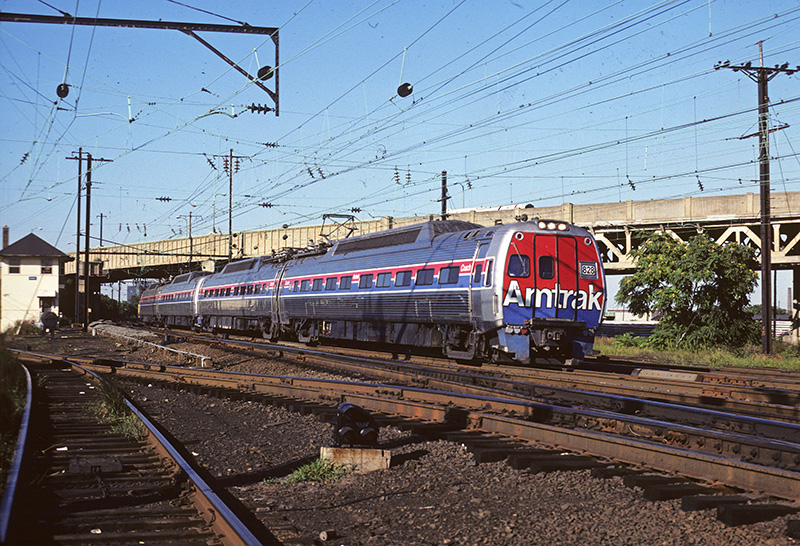 Four Amtrak Metroliners pass Hunter Tower near Newark, N.J. in 1981, on the Northeast Corridor. With plenty of action on the Corridor, this was a popular spot for railfans in the late 1970s and early 1980s. 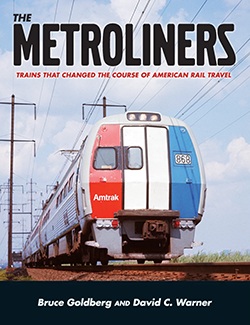 America’s fastest passenger trains were developed through an innovative high-speed rail program that spanned more than forty years. For two generations of rail travelers, “Metroliner” evoked an image of speed and convenience. Conceived when the future of U.S. rail travel was in doubt, Metroliner captured the public’s attention and arguably led Congress to create Amtrak. The Metroliners tells the story of the development, marketing, and operational challenges, all of which led to the train becoming the most-used travel mode in the busy corridor between New York and Washington. Authored by industry insiders, The Metroliners follows the story from the turbulent 1960s to the development and introduction of Acela in the 21st century. Order your copy today! 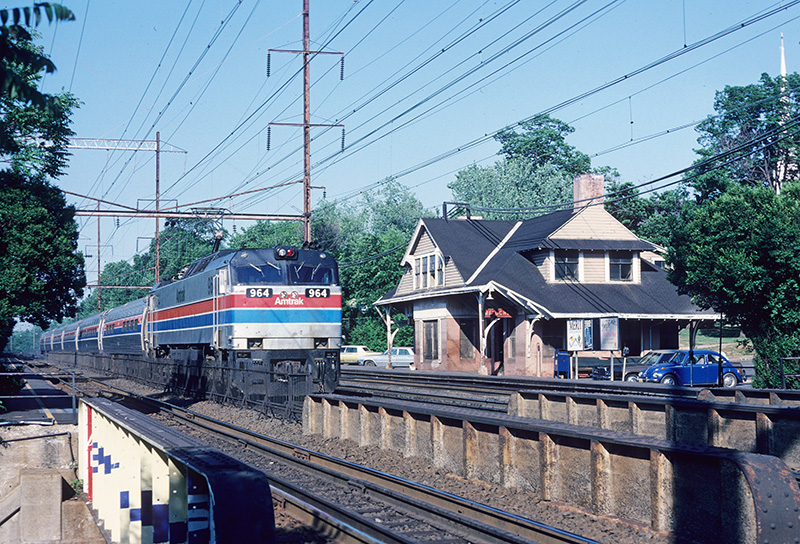 Amtrak E60 964 leads a train down the Northeast Corridor at Metuchen, N.J., in June 1977. The E60 locomotives first arrived in 1974 but were found to have issues accelerating, specifically they would yaw sideways as they picked up speed. The locomotives were later rebuilt. When they were rebuilt they traded the Phase II scheme for the Phase III scheme and were renumbered. E60 964 would become 603. It is now on display at the Railroad Museum of Pennsylvania. 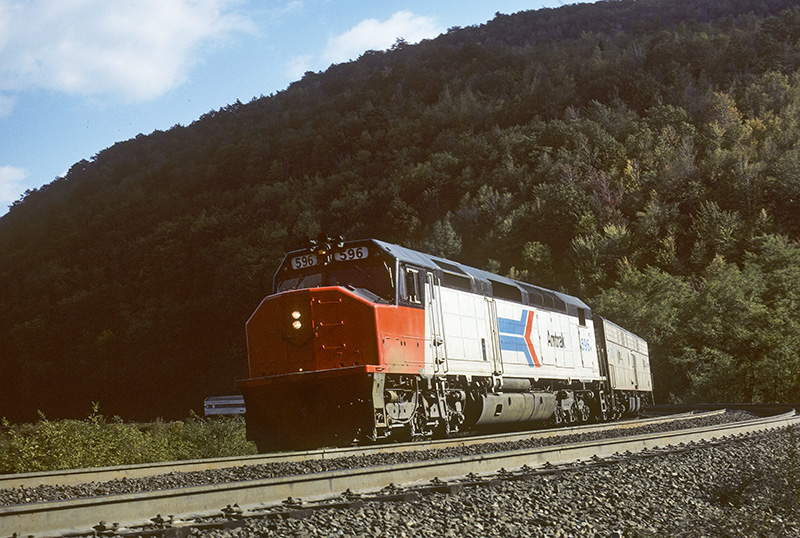 The National Limited on Horseshoe Curve 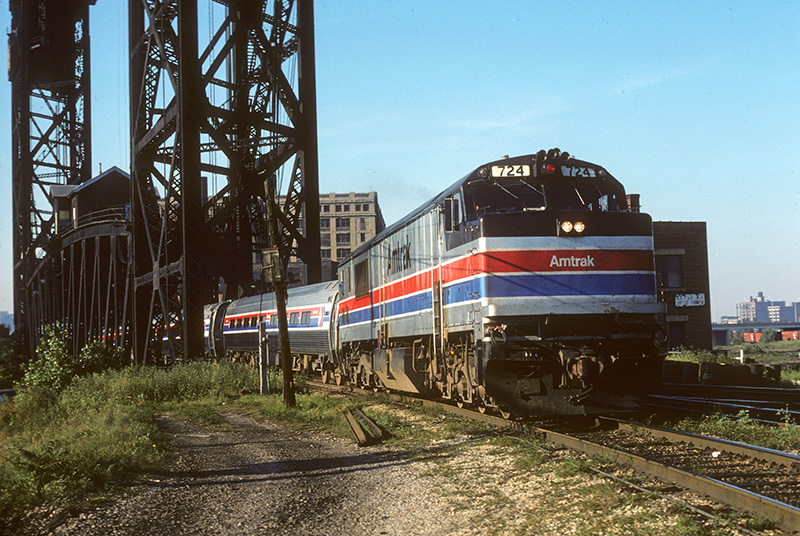 A “Pooch” in Chicago

In August 1976, Jim Boyd caught a P30CH crossing the South Chicago River Bridge at the 21st Street Tower in Chicago. The P30CH locomotives, nicknamed “Pooch,” were among the first brand-new locomotives built exclusively for Amtrak, which rostered all 25 ever built by General Electric. Unfortunately, the locomotives were plagued with mechanical problems and disliked by crews. The last one was retired in the early 1990s. 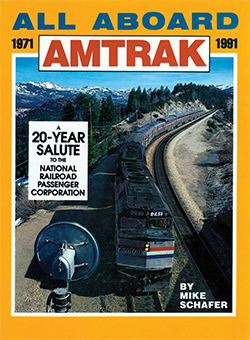 Authored by Passenger Train Journal editor Mike Schafer, with a foreword by Amtrak President W. Graham Claytor, this book provides a detailed look at Amtrak’s first twenty years. It is lavishly illustrated with photos of predecessor and early Amtrak trains and equipment, route maps and early advertising from a time when Amtrak was “Making the Trains Worth Traveling Again.” Order your copy today! 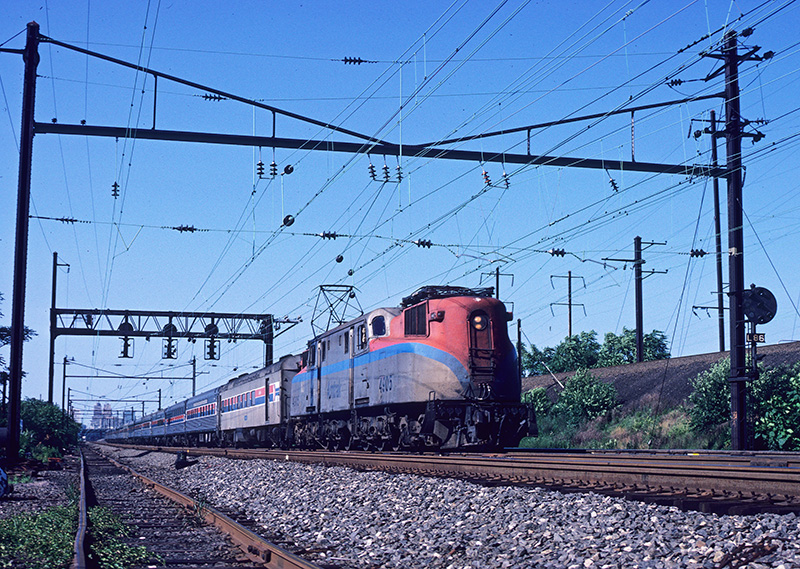 A G on the Corridor

An Amtrak GG1 leads a train on the Northeast Corridor in 1980. Amtrak owned 30 of the iconic Pennsylvania Railroad electrics and leased others for service on the Northeast Corridor between New York City and Washington D.C. While many of the GG1s wore a simple black paint scheme, a few received a variation of Phase I “bloody nose” scheme. The last Amtrak GG1 ran on the railroad’s 10th anniversary on May 1, 1981.

Celebrate Amtrak’s 50th Anniversary with the May 2021 issue of Railfan & Railroad!