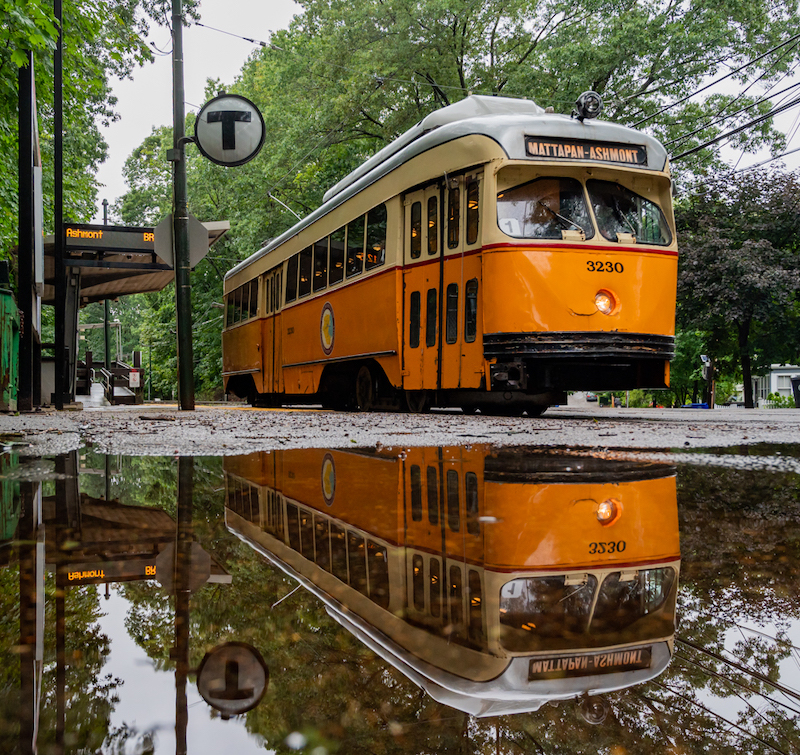 After the rain has stopped, a puddle near the tracks gives PCC 3230 a mirror image as it departs Capen Street heading inbound for Ashmont on August 5, 2021. Photo by Tim Doherty

Photos and story by Tim Doherty

The Red Line subway leads to a glimpse of a different age where the last eight original PCC streetcars run to Mattapan on the Massachusetts Bay Transportation Authority’s (MBTA) Mattapan-Ashmont High-Speed Line.  The eight cars, constructed during World War II, run in daily service over a 2.6-mile dedicated right of way on the southern edge of Boston and the neighboring town of Milton. The Presidents’ Conference Committee (PCC) cars run with a certain amount of obscurity to many in Boston, but they are appreciated by the communities they serve and the visitors who seek them out.

MBTA and its predecessors Boston Elevated Railway and Metropolitan Transit Authority operated a total of 344 PCCs starting in 1937. In addition to the 321 cars ordered new, Boston received 25 secondhand double-ended cars from Dallas. The remaining Mattapan cars were from two orders made in 1942 and delivered in 1944-45. These cars are differentiated from the later post-war cars by the window arrangements. Post-war cars had a second set of small standee windows above the side windows.

The last eight PCCs on the Mattapan Line represent 0.3 percent of the 2,320 active transit vehicles operated by the MBTA. The immensely valuable MBTA Vehicle Inventory, maintained by members of the Boston Street Railway Association, provides a snapshot of the history and status of every piece of MBTA equipment.

Currently there are 6 active PCC cars: 3087, 3230, 3238, 3254, 3263, and 3268. To provide the proper headways during peak periods, five cars are needed. Two more cars, 3224 and 3265, are currently in the MBTA’s Everett heavy repair shops in the process of being rehabilitated. This work, delayed both by COVID and by lead paint found in the 70-year-old cars, appears to have resumed in August 2021 according to photos on a Boston Transit Facebook group.

The final two cars, 3260 and 3262, were damaged in a December 2017, collision near Cedar Grove Cemetery. They are currently stored in Mattapan and will likely be used for parts before their final disposition.

Multiple trips to the Mattapan Line over the years allowed for the accumulation of photographs of every one of the PCCs. The photos serve as a visual roster of the unique fleet of vintage streetcars that continue in everyday service in Boston and Milton. 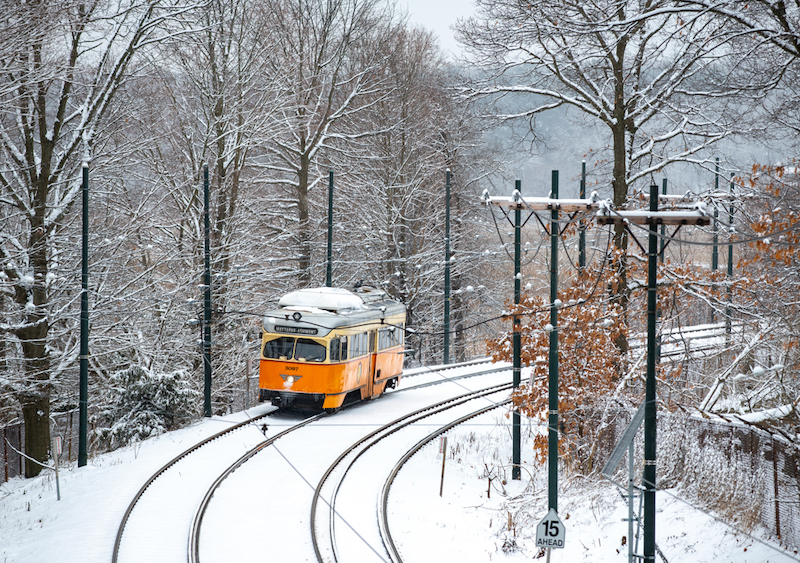 The oldest of the Mattapan PCCs, 3087, passes through Cedar Grove Cemetery heading to Ashmont on February 18, 2018. Taken from the bridge over the tracks within the cemetery with the help of a step ladder. Heavier wet snow sticks to the many trees along the Mattapan Line, which can help the colors of the PCCs pop against a white background. 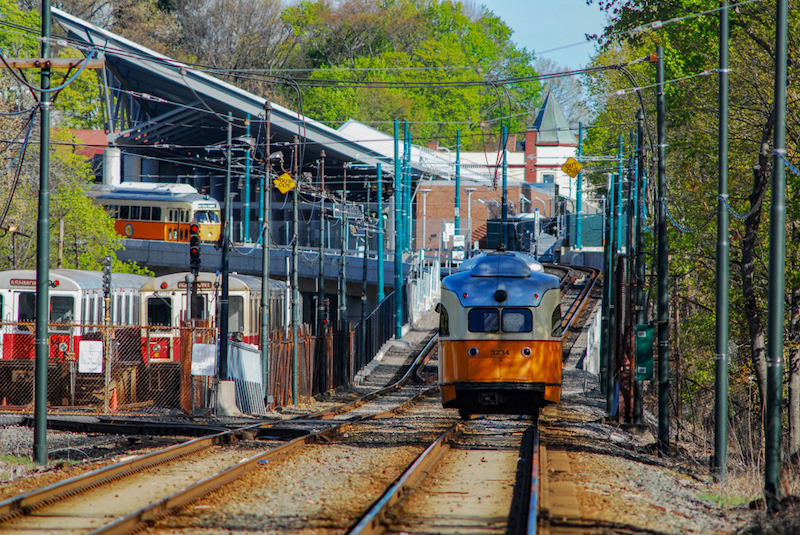 Spring on the Mattapan Line

On an April morning in 2010, PCC 3234 has left Cedar Grove Station on the way to Ashmont where a second PCC has turned to head back to Mattapan. A pair of Red Line trains layover in Codman Yard next to the Mattapan right of way. The switch on the left is the sole rail connection between the Mattapan Line and the rest of the MBTA system. 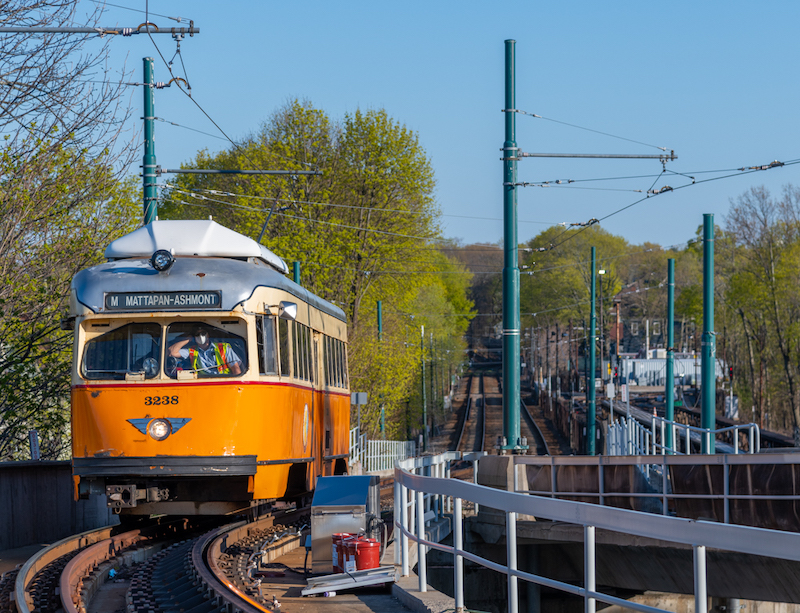 Viewed from the station platform, PCC 3238 heads up the ramp to the loop at Ashmont Station. Built on concrete piers, the loop runs over the Red Line tracks that connect the station to Codman Yard. All Red Line trains travel under the loop when reversing directions back into Boston. 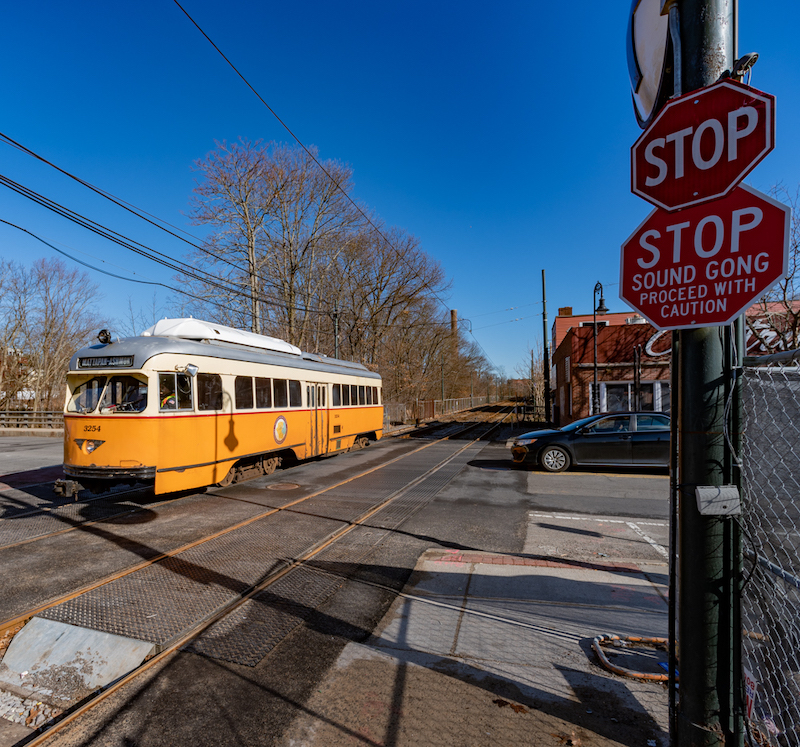 The classic signs for a trolley system are visible from the inbound platform at Central Ave as PCC 3254 passes over this busy grade crossing in Milton. 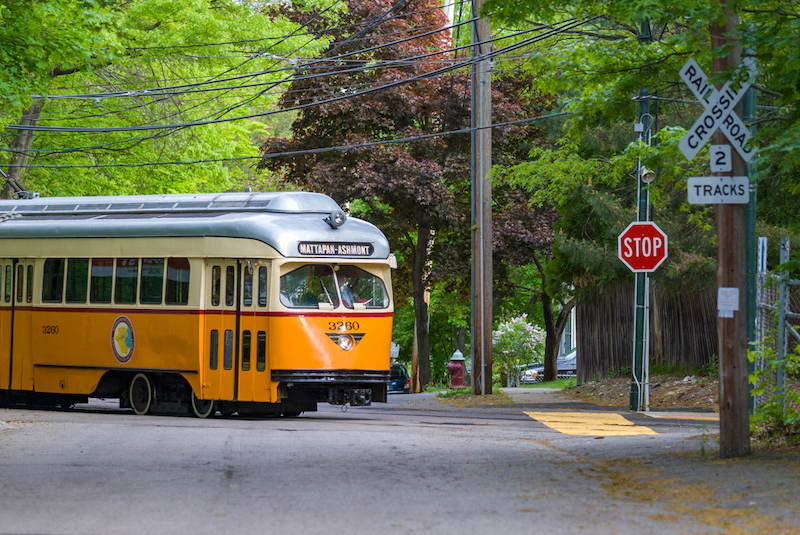 The classic monitor roof of PCC 3260 is visible as it passes over Capen Street in May of 2008. This PCC is one of the two that was wrecked in December 2017. 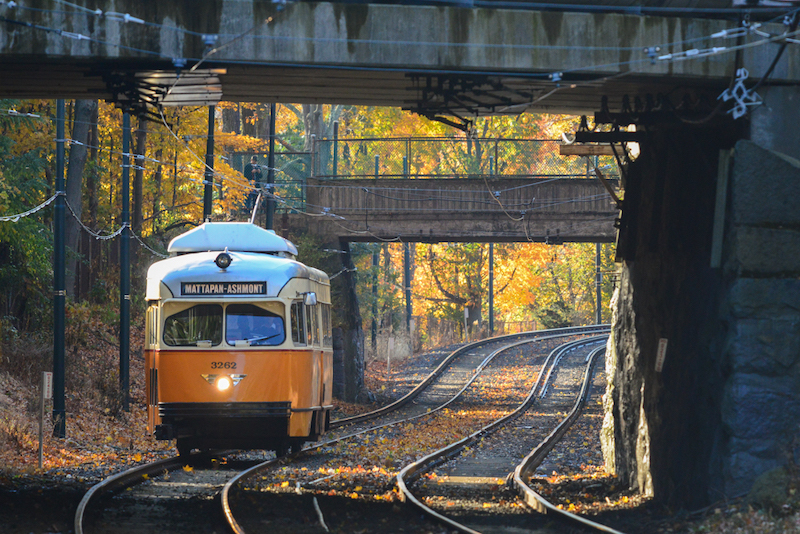 On Trains Day 2013, PCC 3262 passes through the long cut that splits Cedar Grove Cemetery. Viewed from the Cedar Grove station, the fall colors of trees on either side of the cut brighten in the morning light. Late October to early November is one of the best times to visit the Mattapan Line, as the fall colors last longer than the surrounding area because of its proximity to the water. 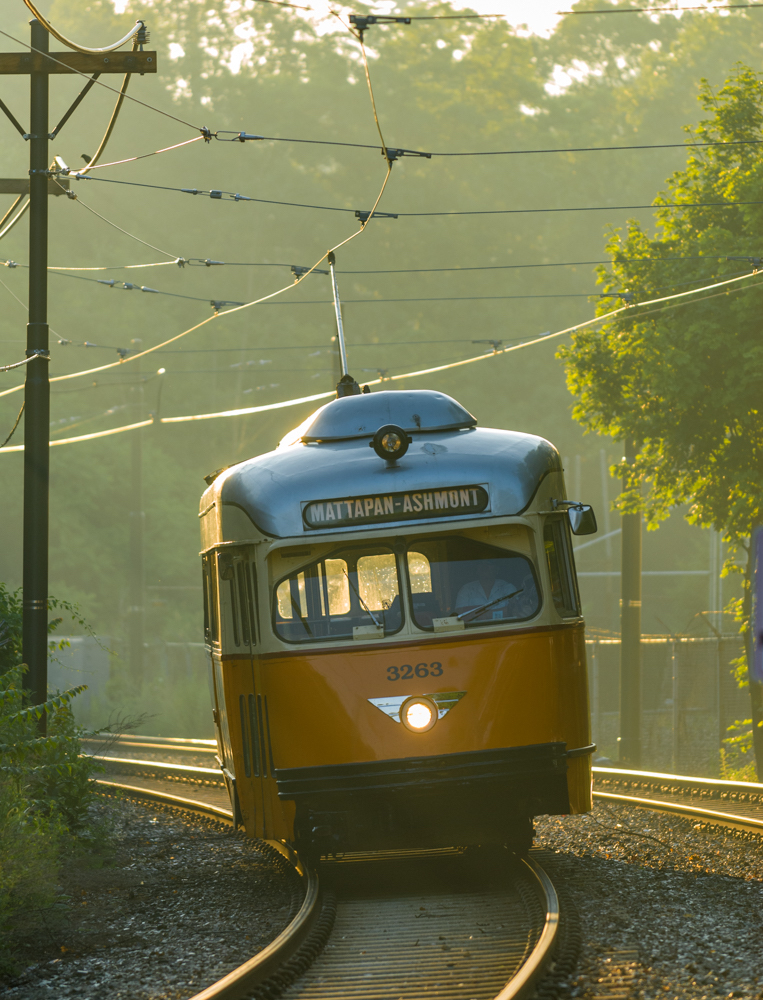 An empty PCC with a monitor roof is backlit by the morning light while approaching Milton Station on June 21, 2008. In 1947, 150 of the cars acquired during World War II were given roof fans and monitor roofs. They were called “Commonwealth” cars. The cars that did not get the fan system were called “flat tops.” 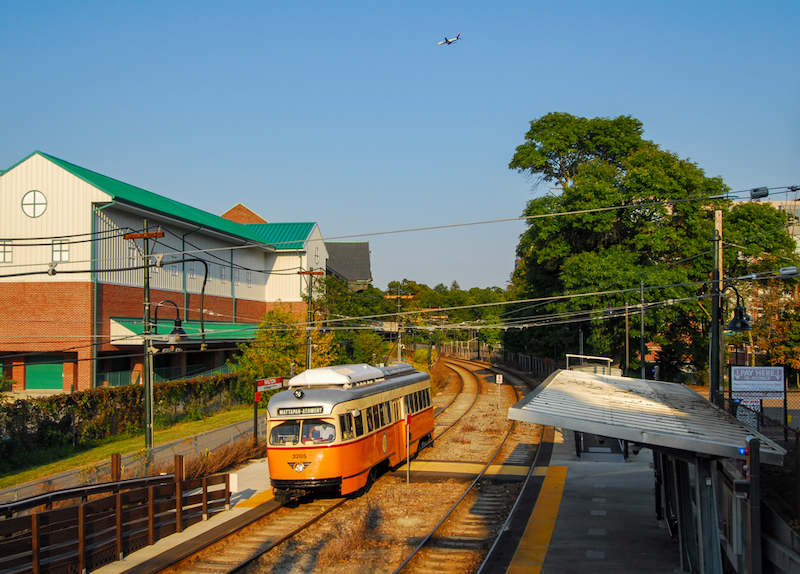 Viewed from the Adams Street Bridge, PCC 3265 makes the stop at Milton Station heading outbound to Mattapan in late September 2008. By the fall of 2008, the MBTA added air conditioning to the front-end roof of the PCCs. At the time, the PCCs were the last non-air-conditioned passenger vehicles on the MBTA system.

MBTA PCC 3268 departs Mattapan Station while a second PCC turns on the loop during twilight on a weekday evening in February 2021. The Neponset River Greenway bridge on the eastern edge of the station provides good and accessible views of the station and maintenance complex.