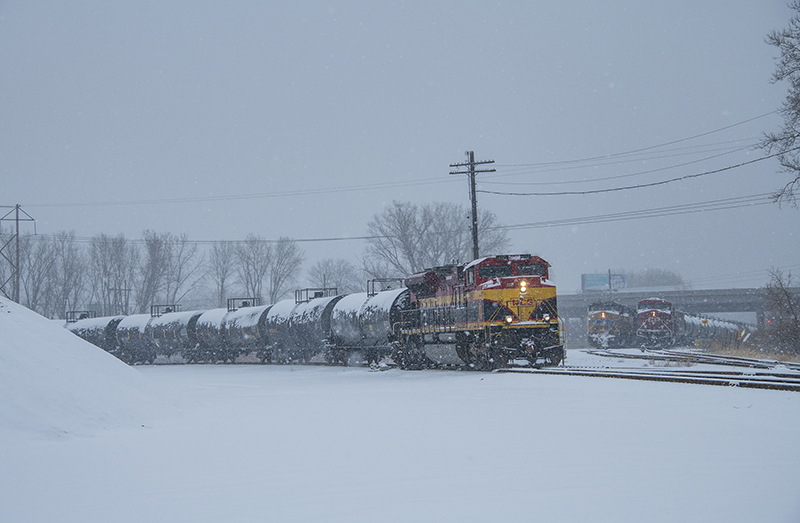 With Kansas City Southern in danger of disappearing into CP, a new book by Kevin EuDaly will present a detailed look at KCS’s Midwestern Division. On December 15, 2019 at 11:27 a.m., KCS SD70ACe 4183 leads a southbound leaving Knoche Yard at Air Line Junction in Kansas City, Missouri, while UP AC45CCTE 5284 and CP ES44AC 8792 look on. Photo by Kevin EuDaly.

Story and Photos by Kevin EuDaly

In 2016, while on a fall excursion along KCS rails on the Rich Mountain climb (between Page, Oklahoma, and Mena, Arkansas), the result of a massive brush-clearing project sparked an interest in documenting KCS across the entire system. Five years later, the first result of that effort nears completion with “Kansas City Southern Volume 1: Midwestern Division” nearing the final proofing stages. Its anticipated release is likely the second quarter of 2022. It is the first of two volumes, and covers KCS from its home terminus in Kansas City, across the state on the former Gateway Western, and down the north-south main line to the end of the Midwestern Division at Shoreline, Louisiana (north of Shreveport). A second volume will cover the other two divisions, which include Shreveport, the line to Dallas, the Meridian Speedway and Mississippi branch lines, and the Beaumont Subdivision through to the end of KCS in the U.S. at Laredo, Texas.

This first volume begins around Kansas City, and reaches back into photography beginning in the mid-1970s. After covering various connections around Kansas City, it follows the former Gateway Western across the Mexico, Roodhouse, Springfield, Jacksonville, Godfrey, and East St. Louis subdivisions, as well as the Gateway Eastern branch. Then it’s south from Kansas City on the Pittsburg Subdivision to Pittsburg, Kansas. The Heavener Subdivision and Fort Smith Branch coverage is followed by a comprehensive look at the Shreveport Subdivision, which includes the well-known climb over Rich Mountain, a portion of the Ouachita Mountains. Each chapter is accompanied by detailed maps.

While it often seems we focus on a railroad as it draws near to the end, this project began soon enough to cover the railroad in its entirety in the U.S. The timing was fortunate on several fronts, and it seemed the stars aligned as I began to pursue KCS in depth. I grew up a half-mile from the KCS main line on the east side of Kansas City, and some of my earliest images in the mid-1970s include KCS. It was a road I never particularly pursued until the red-yellow-and-black Belle paint scheme became prevalent a decade ago. With the colorful paint scheme, I just needed a spark to ignite interest in the smallest remaining of the “Big Seven” Class 1 railroads, and that came on the aforementioned trip with longtime friend John Hake over Rich Mountain.

As the project progressed, I methodically covered every piece of stateside KCS track, and that approach led me to numerous places I would have never ventured to otherwise. I discovered a railroad worthy of attention and generally dominated with friendly crews who appreciate the interest in their railroad. Occasionally, it was like stepping back in time a bit, especially on portions dominated by KCS’s extensive fleet of rebuilt GP38 and GP40 type locomotives. Local freights have always been high on my list of interests, and KCS runs locals extensively across the entire system.

Presented here are a handful of images, none of which made it into the final book. They are arranged geographically, just like the book. 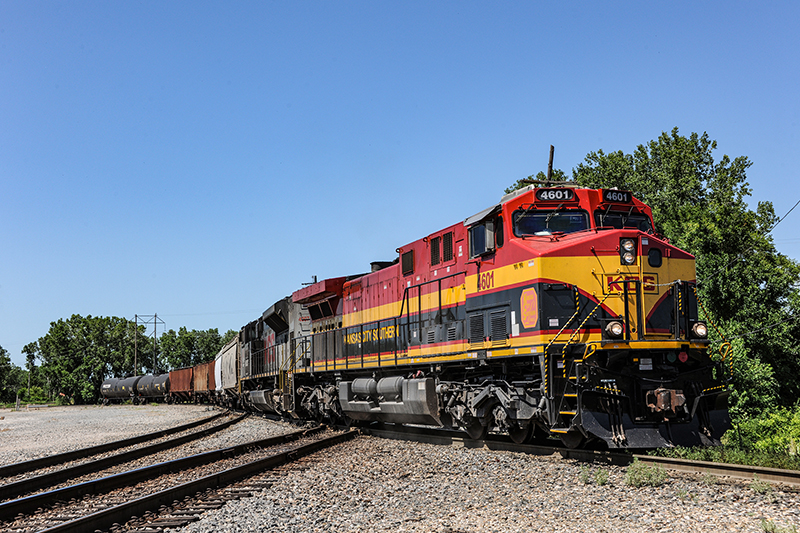 July 7, 2018, 2:07 p.m. — ES44AC 4601 and SD70ACe 4007 are crossing the connection between the Pittsburg Subdivision running south from here, and the former Milwaukee Road’s “new” route into town via the Harry S. Truman drawbridge over the Missouri River, opened on June 1, 1945. That was also the beginning of the “Joint Agency” where KCS and The Milwaukee Road shared the Knoche Yard complex. Rock Island also came in on the same route, also using the drawbridge. The power shown here is switching (in this case setting out two bad-ordered cars) on what’s called the Hawthorn Industrial Lead, so named because it connects to the Hawthorn Generating Station, which is a coal-burning facility served by KCS. 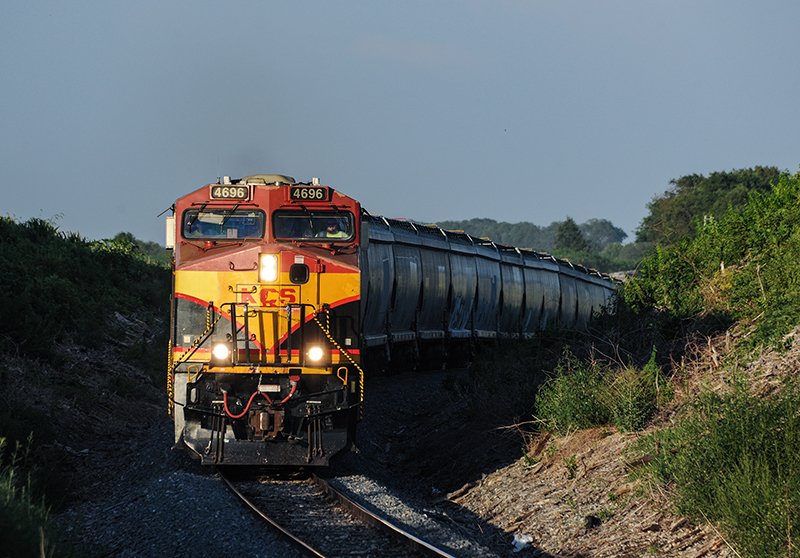 July 13, 2018, 7:42 p.m. — ES44AC 4696 leads a westbound grain train, slipping around a curve east of Alma, Missouri. This train was over 14,000 tons, which is typical for grain trains loaded at Marshall, Missouri, on the Mexico Subdivision like this one. Grain is also loaded at Corder Missouri on the Mexico Subdivision, and Jacksonville, Illinois, on the Jacksonville Subdivision. This train is about to cross Missouri Highway 20, as it catches the last rays of sun on a perfect summer evening. 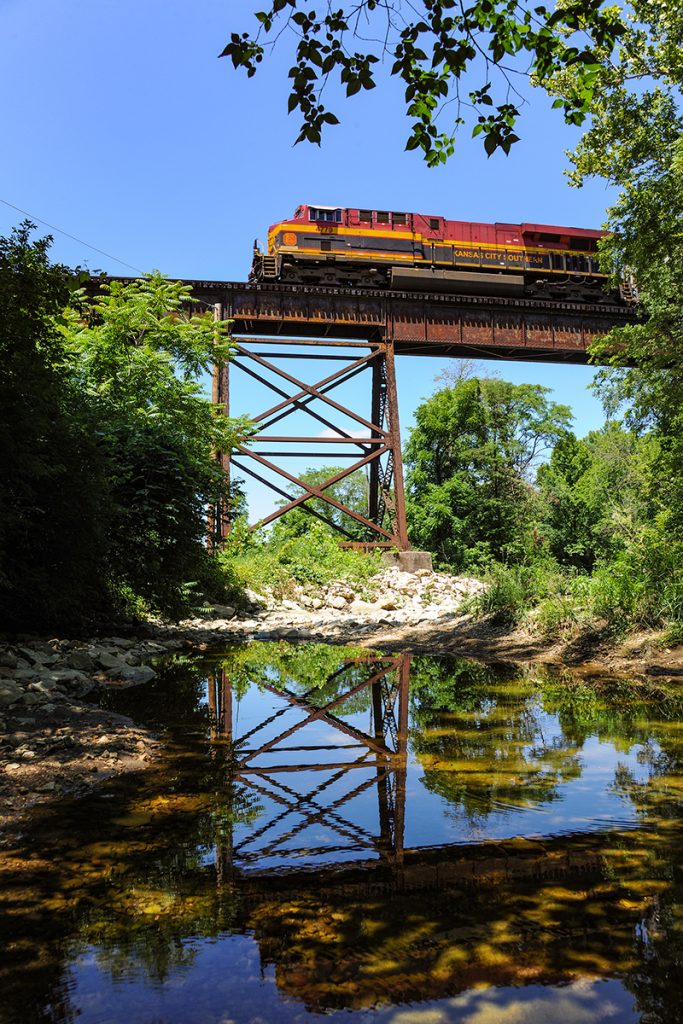 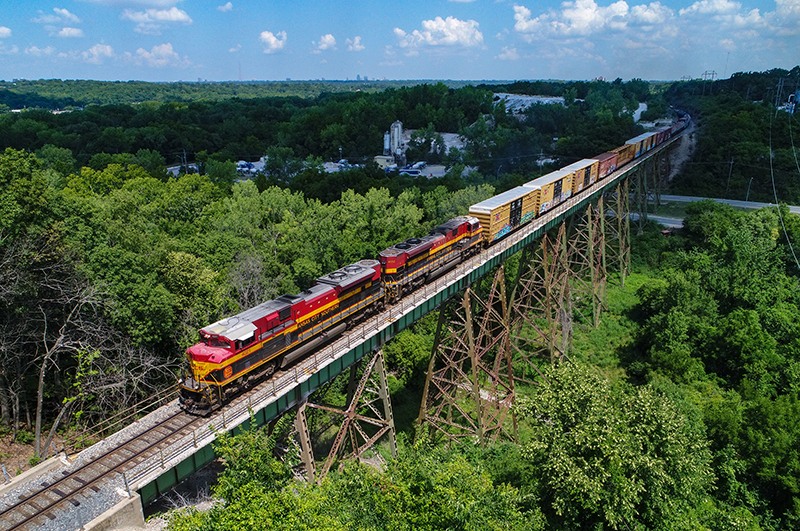 July 10, 2018, 11:40 a.m. — SD70ACe locomotives 4021 and 4052 drag tonnage south up the half-percent grade from Blue Valley to Grandview, on Kansas City’s south side. Thus starts the Pittsburg Subdivision. This is Bridge 13.4, and it is 810 feet long and has 17 spans to get across a small tributary of the Blue River. Its highest point is 110 feet above the valley floor, and it’s on a flatter 0.38 percent grade compared to the rest of the climb to Grandview. This route was built in the late 1920s to avoid using trackage rights on a steeper Frisco route from Blue Valley to Grandview. 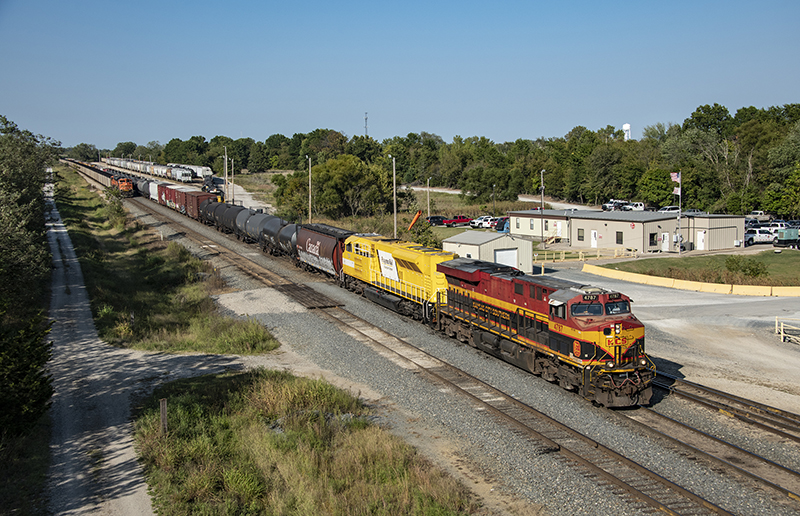 The Yard at Pittsburg

September 25, 2020, 4:42 p.m. — The yard office at the south end of the yard in Pittsburg overlooks the primary point of action. This is where southbound trains add units for the grades over the Ozark Mountains and northbound trains drop them back off. In this view a southbound behind ES44AC 4787 and EMDX SD70ACe 7221 (on lease) is rolling past the yard office having just gotten a fresh crew to begin its run over the Heavener Subdivision. In the distance at left a BNSF-powered coal train is arriving, while peeking out from behind the tank cars on the manifest is power from South Kansas & Oklahoma’s daily interchange train working its train in the yard. 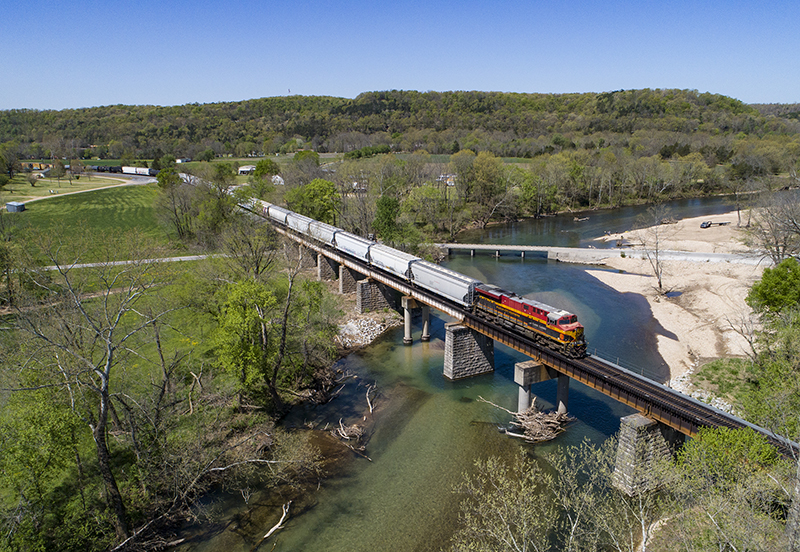 April 19, 2021, 11:49 a.m. — Northbound DPU ES44AC 4811 crosses the Elk River bridge at Elk Springs, Missouri, near Ginger Blue. The Ozark region is blessed with stunning creeks and rivers, nearly all of which are crystal clear and gravel bottom streams coming off the Ozark Plateau. Bridge 197 (like most railroads KCS numbers its bridges according to mileposts) is comprised of 12 spans and is 628 feet in length. 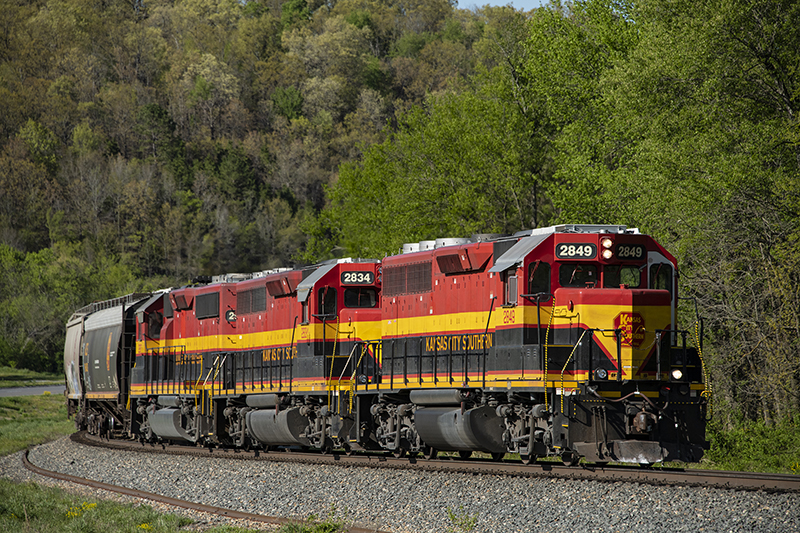 April 19, 2021, 4:57 p.m. — Watts, Oklahoma, was once a crew change point, but that was eliminated a couple of decades ago. A weekday dodger, KCS’s term for a local freight, works north out of Watts typically as far as Siloam Springs, Arkansas. In this photo it has arrived back at Watts and is switching around the curve from the south end of the yard. Power on this day is a trio of GP40-3s, 2849, 2834, and 2849, which were built as SCL GP40 1614, Penn Central GP40 3172, and Frisco GP40-2 769, respectively, illustrating the wide variety of predecessor railroads represented in KCS’s rebuilt EMD B-B fleet. 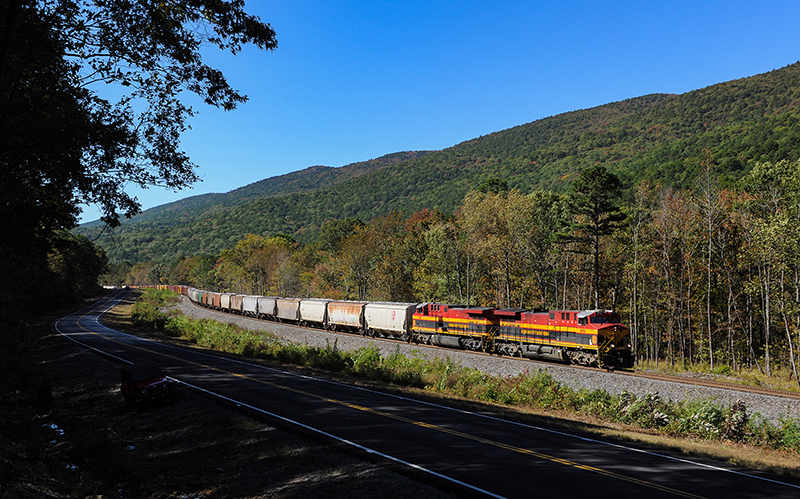 October 24, 2017, 2:06 p.m. — AC4400CWs 4616 and 4594 work a 126-car manifest crawling up the grade south of Page, Oklahoma, on the Shreveport Subdivision. The result of the brush cutting done in 2016 is apparent here, and by 2021 this view was already obscured by rapidly growing vegetation — the Midwest grows brush at an alarming rate. Parallel U.S. Highway 59 is in the foreground and follows the railroad closely from Page to Rich Mountain, the summit of the climb. 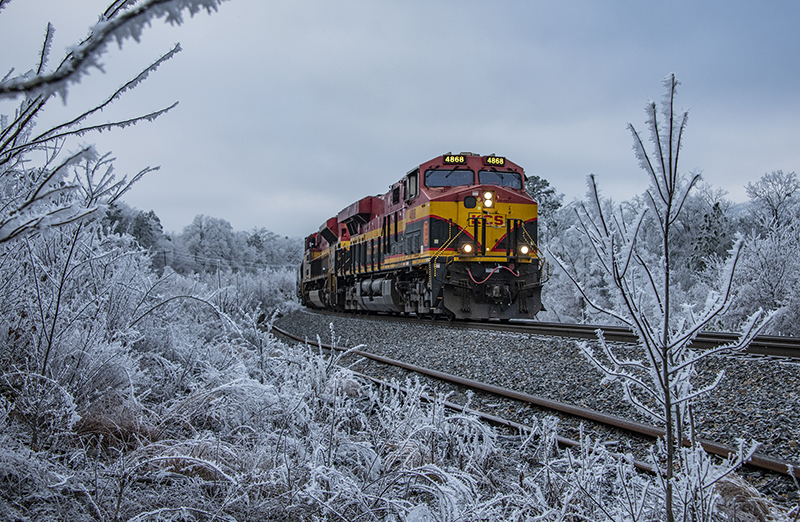 Hoarfrost at the Summit

February 13, 2021, 4:58 p.m. — Hoarfrost occasionally occurs during winter months on this portion of the Ouachita Mountains, and Rich Mountain is the most likely place to find it as it’s the highest elevation for KCS rails in the area. Southbound Train M-KCSH (Manifest, Kansas City to Shreveport) behind ES44AC 4868 is almost done with its battle as the summit is just a couple dozen car lengths away. 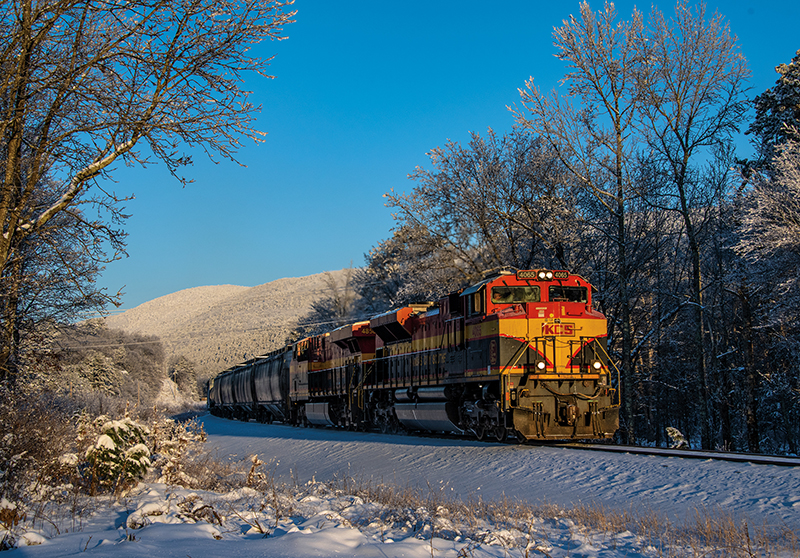 February 16, 2021, 7:31 a.m. — Significant snow is not common in the middle latitudes of Arkansas, but two storms dumped significant accumulations during the third week of February in 2021. SD70ACe 4065 is north of Rich Mountain (geographically west) working hard up the grade. The two storms dumped over 18 inches of snow south of Texarkana.