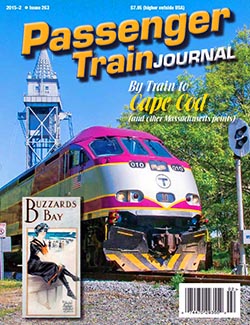 PTJ was founded in 1968 by Kevin McKinney and has covered the passenger rail industry off and off for decades. In the 1990s, it was acquired by Pentrex but ceased publication in 1996. White River revived the publication in 2006 and hired Schafer — who had been at the magazine when it closed a decade earlier — to lead it.

Holland is no stranger to rail publishing, having helped edit PTJ and Passenger Train Annual. Holland has authored dozens of magazine stories and more than 20 books over the last four decades.

Although Schafer is stepping down as PTJ’s editor, he will still be involved in writing articles for the magazine. His other work for WRP in historical society publications will continue into the foreseeable future. Holland will become editor effective with the Third Quarter 2022 issue.