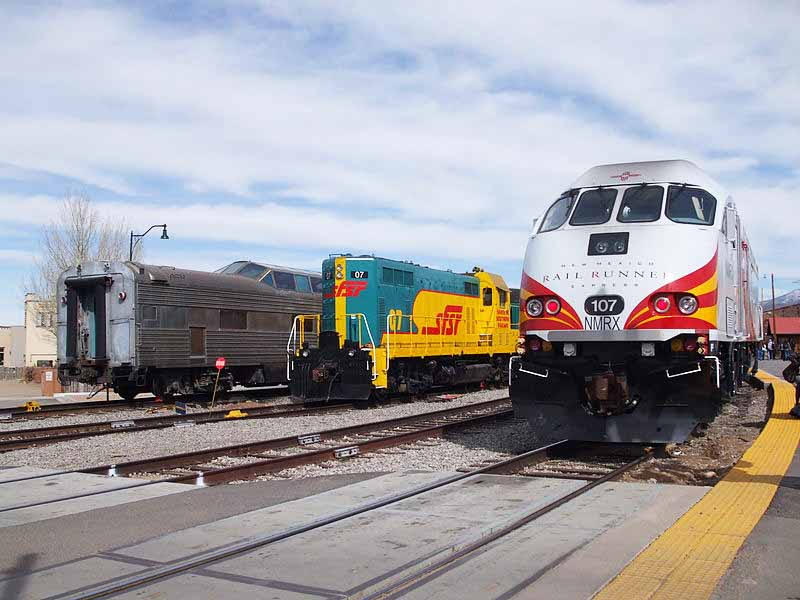 New Mexico’s Santa Fe Southern Railway has found a savior that plans to repair its track, renew its equipment and restore passenger and freight service. And while that may sound like a fantasy to long-time observers of the struggling New Mexico shortline, who better to bring a fantasy to life than “Game of Thrones” creator George R.R. Martin, one of the railroad’s new owners.

Joining the new company as Vice President and General Manager is veteran railroader John Howell, who has been leasing, selling and operating locomotives and railroads since founding the Northern Illinois & Wisconsin Railway Company in 1999.

“We will be starting with maintenance-of-way work,” he said, noting that years of deferred maintenance have taken a toll on the roadbed, tracks and bridges.

The new owners told the Albuquerque Journal they were polishing off a pitcher of margaritas after a dinner hosted by Banowsky when he suggested they buy the railroad. They all agreed. The process would be a complicated one, involving three separate transactions to acquire the railroad property and control of the stock.

First, they negotiated a new mortgage on the passenger depot and yard in Lamy, N.M., last summer, which was in default after years of non-payment. Early this year, they bought out the largest stockholder, with 48 percent of the shares, along with the debt held by that family which was secured by liens on the railroad’s ten cars and two locomotives, an ex-Santa Fe GP7u and a GP16 rebuilt from a Louisville & Nashville GP7.

Finally, they bought the 33 percent of the stock held by longtime executive and general manager Karl Ziebarth, who waged a valiant effort to keep the railroad alive and out of bankruptcy for the past six years. That purchase and a few others gave the trio full control with 89 percent of the stock.

Ironically, during the 19th century, the Atchison, Topeka & Santa Fe Railway nearly left Santa Fe out of its system. The railroad was chartered in 1859 to connect Atchison and Topeka, Kan., with Santa Fe, but after railroad construction reached New Mexico two decades later, civil engineers decided to skip Santa Fe due to elevation issues, opting for a less challenging route to Albuquerque. Rather than accept the disappointment and a likely loss of business and industry, community leaders there raised funds for the construction of a connection to the ATSF mainline at Lamy, 18 miles to the south.

In 1992, the Santa Fe finally jettisoned the low-performing link to its namesake, but once again, local interests rallied to save the rail connection, creating the Santa Fe Southern Railway. Freight service was maintained and excursion trains were added later, providing a new attraction for tourists.

After two decades of relative success, the SFSR struggled following the 2008 recession.  As traffic waned, freight and passenger service were combined, briefly recreating the long-vanished mixed train. Freight traffic dried up in 2010. Without revenue to cover operating and maintenance expenses, excursion trains were suspended at the end of the 2012 season. Excursion service briefly resumed in 2014 but that effort later faltered.

Since then, the railroad has operated sporadically, hosting occasional charter trips, weddings and video productions, including an episode of “Breaking Bad.”  A 2018 experiment with selling alcoholic beverages from a stationary club car ended quickly after state liquor authorities ruled the railroad was only licensed to sell drinks to travelers in transit. One charter excursion last summer ended in embarrassment when GP16 SFSR 93 failed and passengers had to be bussed back to Santa Fe.

But those days could be over and the new owners are envisioning a first-class operation. Banowsky said his next focus will be on needed track and bridgework, followed by restoring the rolling stock. Given the backgrounds of the principals, it’s no surprise that murder mystery trains and other ideas involving actors and interactive experiences are under consideration along with holiday theme trains.