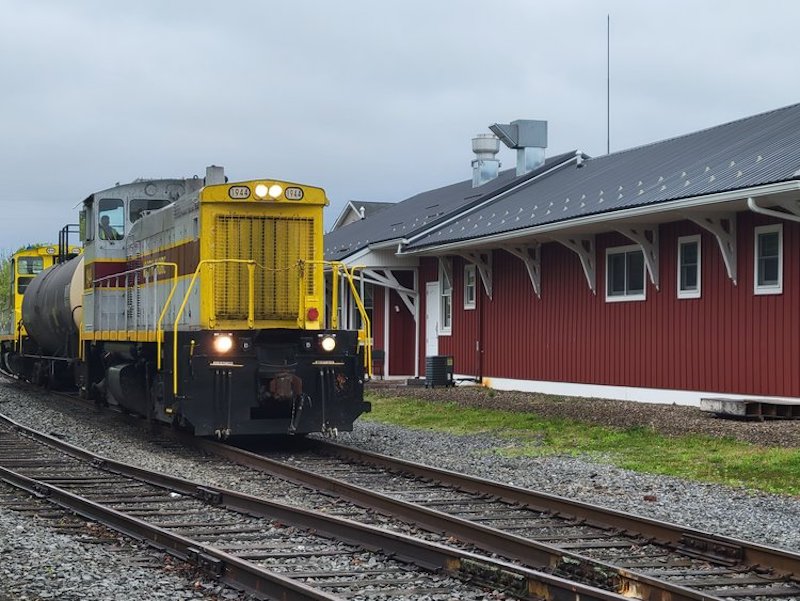 KREAMER, Pa. —There is good news for both freight customers and railfans in central Pennsylvania with the takeover by North Shore Railroad of a section of former Pennsylvania Railroad trackage in Snyder County. Service began May 4, between Selinsgove and Kreamer, with a tank car sandwiched by NSHR 1940 and 1944, a pair of ex-Southern Railway SW1500s in a paint scheme recalling Erie Lackawanna.

Once part of a branch that reached Lewistown, just nine miles of track remain in service, terminating in Kreamer. It serves three customers, including Kreamer Feeds, the major shipper. The line was owned and operated by Pennsy successors Penn Central, Conrail and Norfolk Southern until April when the tracks were sold to the Susquehanna Economic Development Association – Council of Governments Joint Rail Authority for $371,200.

It may sound counterintuitive, but the change from service by a major Class I railroad to a Class III shortline is likely an upgrade for customers. NSHR President Jeb Stutter expressed confidence that improved service to the existing customers will be a factor in stimulating traffic growth on the line.

The acquisition increases the trackage under authority control to about 215 miles. It is now designated as the Selinsgrove Branch of the North Shore Railroad, a Northumberland-based shortline operating through Danville, Bloomsburg, and Berwick to Beach Haven.

The shortline holding company North Shore Railroad & Affiliates holds the contract as operator for the authority, running four short lines across central Pennsylvania in addition to North Shore, including Juniata Valley in the Lewistown area; Lycoming Valley from Avis to Muncy via Williamsport.; Nittany & Bald Eagle from Lock Haven to Tyrone with branches to Bellefonte and State College; and Shamokin Valley from Sunbury to Shamokin. It also operates Union County Industrial Railroad in Northumberland.

The system has long been a favorite with area railfans for its use of older diesels in paint schemes that pay homage to the Fallen Flags of the region, including Reading on the Lycoming Valley and PRR on Juniata Valley.