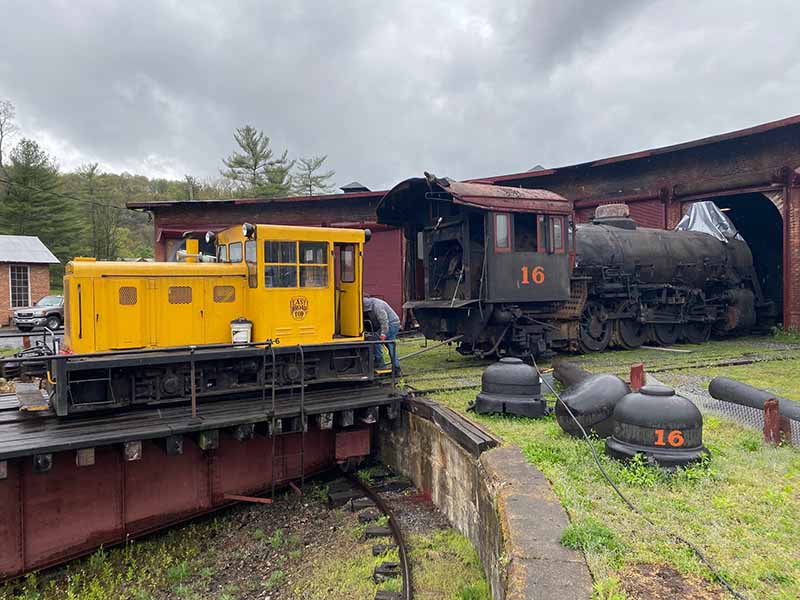 Locomotive 16 will likely be the first to run at the EBT. Photo Courtesy of the EBT Foundation.

ORBISONIA, Pa. — Since the announcement earlier this year that the East Broad Top had been purchased by a non-profit foundation, a lot of work has been done in preparation for reopening. Five switches were replaced in the yard, there’s a new concrete floor in the locomotive shop, buildings are being stabilized and sections of main line track have been resurfaced. Two 2-8-2 locomotives – Baldwin 14 and 16 – have been torn down and are being inspected and hydro-tested.

In fact, enough work has been done that short train rides, pulled by a diesel locomotive, are being planned for Aug. 13-15 to celebrate the 60th anniversary of tourist trains on the East Broad Top. There will also be shop and roundhouse tours as well as streetcar rides at the neighboring Rockhill Trolley Museum.

“It’s amazing to see things happening,” Lawrence Biemiller, an EBT Foundation Inc. board member, told Railfan & Railroad recently. “We are ahead of where we thought we would be and a lot of things are falling smoothly into place.”

During the pandemic, some contract and staff work continued at a safe social distance, but large volunteer projects were postponed, including those of the Friends of The East Broad Top. But with much of western and central Pennsylvania moved to the “green” recovery phase, sessions resumed June 13 with a limit of 45 participants split into multiple small groups. The Friends organization has been growing, too. Since the announcement of the railroad’s rebirth, the organization has increased from about 775 members to about 1,160. The lone work session before the pandemic closed things down drew more than 60 people on a Saturday and about 40 on a Sunday.

Of the steam locomotives, superheated Mikado 16 has been found to be in the best shape and will probably be the first returned to service, said Biemiller. “It was shopped by the railroad in 1955, and according to records it ran only a handful of days in 1956.” Locomotive 14, which ran into the 2000s, has also been found to be in good shape and is a likely candidate to run in the coming years.

Next up on the “to-do” list was the stabilization of the south end of the car shop, which was done by the Woodford Brothers. Repairs are also planned for the bridge at Runk Road, which was struck and damaged by a large boom truck this spring.

The 33-mile East Broad Top was built in the 1870s to bring coal out of the central Pennsylvania mines, but also carried general freight, mail and passengers. Demand for coal kept the railroad running until 1955, but it fell on hard times and filed for abandonment. In 1956, the assets of the East Broad Top Railroad & Coal Co. were purchased by Nick Kovalchick, a local salvage dealer. In 1960, the twin boroughs of Orbisonia and Rockhill Furnace approached Kovalchick about putting a locomotive on display for the towns’ bicentennial. Instead, a series of excursions were run that summer. The trips were so successful that they continued for 52 years until 2011.

In early February, the deal closed on the foundation’s purchase of 27 miles of track, the shop complex, locomotives and rolling stock. Regular excursions should return in 2021. Tickets for the August events will go on sale soon on the railroad’s web site at eastbroadtop.com.