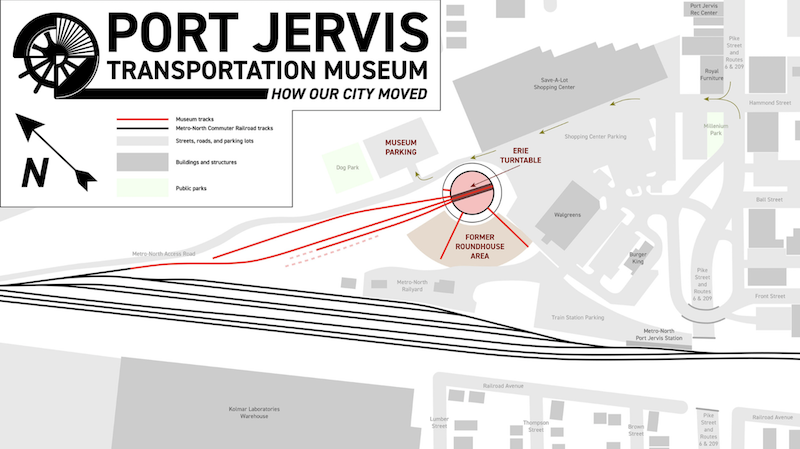 Equipment used for Operation Toy Train is expected to arrive at the former Erie yard in the coming months.

PORT JERVIS, N.Y. — A former Erie Railroad turntable and yard will be turned into a rail museum in Port Jervis, New York, it was announced this week.

The new Port Jervis Transportation History Center is the result of a joint effort by four nonprofits to open a museum at the former Erie yard, including Operation Toy Train, the Outdoor Club of Port Jervis, the Friends of Port Jervis Art & History and the Tri-States Railway Preservation Society. The new museum will also double as a place to store equipment for an annual Toys for Tots train that runs through northern New Jersey and southern New York. Operation Toy Train first proposed the idea in June 2020, and earlier this week it inked a deal with the city to turn the dream into a reality.

“After over a year of effort, we’re ecstatic to see this project finally coming to fruition,” said Rudy Garbely, a director for Operation Toy Train. “Instead of just organizing a once-a-year regional Toys for Tots collection event, our group and our historic railroad equipment can now be an asset for the Port Jervis community all year long.”

Operation Toy Train has operated during the first two weekends of December since 2009 collecting donated toys for the U.S. Marine Corps Reserve Toys for Tots Foundation that are given to underprivileged children. Over the years, the group has acquired a number of cars, including a former Atlantic Coast Line baggage car, three boxcars and two cabooses. Last year, it acquired even more equipment, including some historic Erie cabooses, and outgrew its old storage site.

While the city had been supportive of the idea for quite some time, there was some equipment onsite that needed to be moved from a previous tenant. Now that that equipment has left, Operation Toy Train can move in. Operation Toy Trains’ volunteers will maintain and restore railroad equipment on site and volunteers from the Outdoor Club will maintain the grounds. Tri-States Railway Historical Society will also open up a small museum with displays and artifacts inside one of the historic rail cars. The control house on the former Erie turntable, which fell into disrepair under the care of the previous tenant, will be one of the first restoration projects taken on by volunteers.

The group plans on having a “soft opening” in November. More information about that will be available this fall.