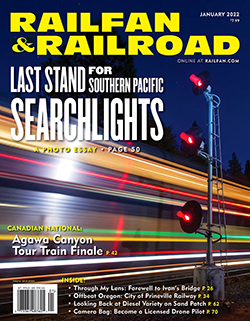 The concept of railway signals is straightforward enough — sets of lights or other variable signs, put up along the tracks, the purpose of which is to instruct train crews to stop or to proceed. The concept of “go, slow, stop” is similar to how traffic lights control highway intersections. Simple, right?

Not so fast. Across North America, there is no standard design for railway signals. From their advent as a mixture of movable wooden signs and flags until the latest high-tech computer-controlled installations, signal designs often varied from company to company. By the late 19th century, most railroad signals were based on the semaphore design, which included both a colored light and a paddle, the position of which indicated whether or not the track ahead was clear (based on a military system of passing messages from hilltop to hilltop dating back to the 1860s).

While most railways had adopted semaphore signals of some type as a standard, by the early 20th century things got more complicated. Each railway adopted designs they thought best suited its operations. The “searchlight”-style signal came into vogue by 1925, consisting of a single light with a mechanism that moved a green, yellow, or red lens to give the proper indication. While New York Central lines east converted from semaphore to searchlight in the 1920s, lines west of Buffalo used an arrangement of two lights across the top, and one below, their pattern leading to the nickname of “tri-light.” The Pennsylvania famously used what it called “position lights,” a large round metal disc into which yellow lamps were set. Various patterns of three lights would be energized to mimic the position of a semaphore, with three lights vertically indicating “clear,” three in diagonal indicating “slow,” and three across indicating “stop.” Baltimore & Ohio split the difference, mixing the pattern used by the Pennsy with the logic of red-yellow-green lamps, a design known bluntly as a “color position light” signal, or CPL.

Then there are the meanings behind the signals. Green, or “clear” as it is usually known, seems obvious, as does red. If you guessed “proceed” for the former, and “stop” for the latter, you’re right. But what is a flashing yellow called, and what does it mean? While some indications are universal across all railways, some have interpretations specific to their operation. On one railway, that signal might be called an “advanced approach” and indicate to train crews that the signal after the next one may display a stop indication. On another, however, a flashing yellow may mean “approach medium,” and have a different meaning relating to the route the train will take two signals away.

From here, matters can quickly devolve into extremely specific and technical arcana, especially if multiple signal heads are present. What is a yellow-over-flashing green? A red-over-flashing yellow? A flashing green? It all depends on what railroad you are on, and what rule book they have adopted.

For the enthusiast, who is not required to remember all of these aspects and meanings, the many variations are part of the charm of specific railroad places. It is difficult to imagine Ohio without the CPL, or Montana without upper-quadrant semaphores. Yet this variation is also on its way out — as signals wear out, or as lines receive upgrades, older signals are more and more being replaced by rather bland, standardized designs.

One distinctive example of this is along the former Southern Pacific. SP famously used the so-called searchlight signal. These are, in their simplest form, a single round target around a single lamp. That central lamp, however, can display one of three light colors, sometimes steady, and sometimes flashing. A clever set of color filters, electro-mechanically moved, makes this possible. With a tight, focused beam, these signals could be seen from miles away, a sight that was particularly dramatic in the vast spaces of the West. Although economical to power, their mechanical components and their age means that searchlights are less and less common. Photographer Dick Dorn made a point to record these classic signals before they were replaced and modernized across former SP lines. The standardization of their increasingly ubiquitous replacements may be safer, but like many railfans, I will miss their uniqueness when they are gone.

This article appeared in the January 2022 issue of Railfan & Railroad. Subscribe Today!