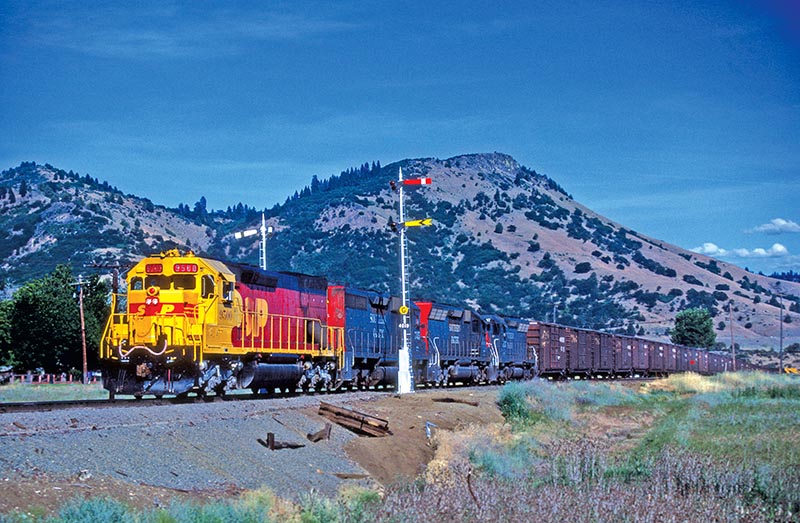 Southern Pacific 9501 leads an eastbound train over the Siskiyou Line at the California-Oregon border on June 22, 1986. —Photo by Wayne Monger, Kevin EuDaly collection

This month, Bruce Kelly takes us trackside to mark the 25th year of BNSF Railway operations on Stampede Pass. Stated plainly, that may seem unimpressive — that is, until you realize that this rail line over the Cascade Range was dormant for more than a decade prior to its 1997 reactivation, seemingly headed for the scrappers.

All too often in railroading, when a company stops operating over a line and places it “in mothballs,” that means the end. The typical story, at least on branch lines and short lines, is that a major shipper closes and there’s not enough traffic to pay the bills. A last train runs, equipment gets cleared out, and the company files for abandonment. In the case of Stampede, BNSF predecessor Burlington Northern was smart enough to retain the crucial summit as inactive, rather than abandoning it completely.

Weather is another common cause in closing rail lines. A storm brings landslides, sending miles of track into the depths of a forested canyon, or a bridge is damaged in a flood, or a tunnel collapses from water or fire damage. The Pacific Coast in particular has seen a lot of this sort of loss over the last half-century. California’s Northwestern Pacific shut down past Willits due to a tunnel fire in 1984, and in the decades since, what remains of its main line to Eureka, almost 150 miles to the north, has been eroded away by storm after storm. The old Southern Pacific route over the Siskiyous was shuttered by operator Central Oregon & Pacific in 2003 after its summit tunnel caught fire. A tunnel collapse in 2007 led the same company to abruptly cease its operations on its 100-mile Coos Bay branch, while the even more torturous Port of Tillamook Bay Railroad route over the Coast Range suffered storm damage that closed its link to the national network for good. Even main lines are not immune; BNSF’s routes out of Seattle routinely close due to mudslides caused by intense rain each autumn.

The larger disasters are often the final proverbial straw. While BNSF’s mudslides are typically cleaned up in days, both POTB in Oregon and Northwestern Pacific in California remain out of service and unrepaired. The costs of rebuilding, when compared to the minimal traffic the lines bore before shutdown, mean that their damaged tracks rust away in obscurity as industry becomes archaeology.

Sometimes, though, the improbable happens. The route over Siskiyou Summit, for example, did eventually reopen. The tunnel fire itself was the first obstacle. In order to prevent fires, SP had lined the timber tunnel with gunite, a kind of concrete that could be sprayed rather than poured. The 2003 fire, however, managed to get behind the gunite lining, where it smoldered for almost an entire year. Once the fire was finally out, the problem of planning, financing, and carrying out repairs took over. The repair process took a staggering 11 additional years.

In many ways, the Coos Bay branch was even more remarkable. Damaged by a 2007 storm that partially collapsed several tunnels, CORP shut the route with no plans to reopen — once more, the economics simply didn’t pan out. The International Port of Coos Bay, located near the end of the branch, objected, noting that its continued operations depended on the rail line. Through a series of regulatory and legal proceedings, the port managed to take over ownership of the route, and in October 2011, the line reopened and has thrived since as Coos Bay Rail Link. The Coos Bay branch, like Stampede Pass, reminds us that sometimes against all odds, hopes become reality, and the future may still surprise us.

This article appeared in the December 2021 issue of Railfan & Railroad! Subscribe Today!