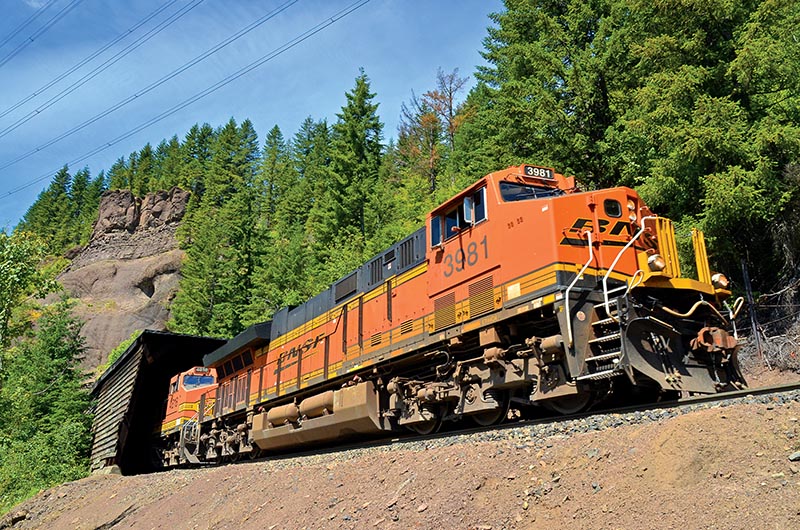 By Bruce Kelly/photos by the author

Hard to believe it’s been a quarter century since BNSF Railway breathed new life into a densely forested, often damp Pacific Northwest mountain pass that sat dormant for more than a decade. A mountain pass that most thought would never hear the roar of locomotives again. A mountain pass where today’s procession of trains rebukes the shortsightedness of railroad executives some 40 years ago.

After St. Louis-San Francisco Railway merged with Burlington Northern in 1980, former Frisco officials who rose to new positions of power declared a number of BN routes and facilities to be redundant or too costly to maintain. This included the old Northern Pacific main line via Stampede Pass in the Cascade Range of western Washington. BN closed, but did not fully abandon, Stampede in 1983.

Three years later, ex-NP trackage east of the pass, between Cle Elum and Kennewick, Wash., was sold to newly formed regional Washington Central. BN figured that its ex-Great Northern route via Stevens Pass to the north and its ex-Spokane, Portland & Seattle route through the Columbia River Gorge to the south were capable of handling all its traffic to and from Puget Sound, Portland, and the surrounding coastal region. 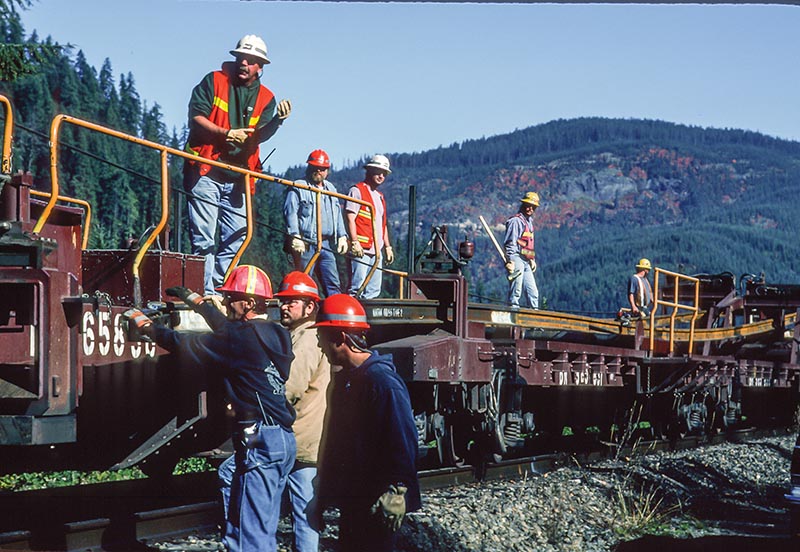 ABOVE: Roadmaster Steve Ince (top left) gestured to the winch operator as his gang prepared to offload another strand of new rail along the west slope near the old station site of Kennedy on September 28, 1996.

For the most part, Stampede Pass was left to rust and rot, but BN managed to pull it out of the mothballs on a handful of occasions. During 1984, three
B32-8 demonstrators, painted in BN green and numbered 5497–5499, toured the BN system in General Electric’s attempt to prove that its latest four-axle technology could do the same work as a six-axle SD40-2, while using less fuel. For one week in July, the GEs had free run of Stampede, lugging ballast cars up and down the west slope, with a GE test car capturing the performance data.

A few weeks later, in September 1984, it was EMD’s turn, making use of Stampede’s grades and curves to test an articulated, self-steering, four-axle truck that had been installed under BN SDP45 6599. But none of that compared with the action-packed week in August 1985 when a flurry of trains was detoured over Stampede after a derailment and bridge fire east of Wenatchee, Wash., had closed the Stevens Pass route… 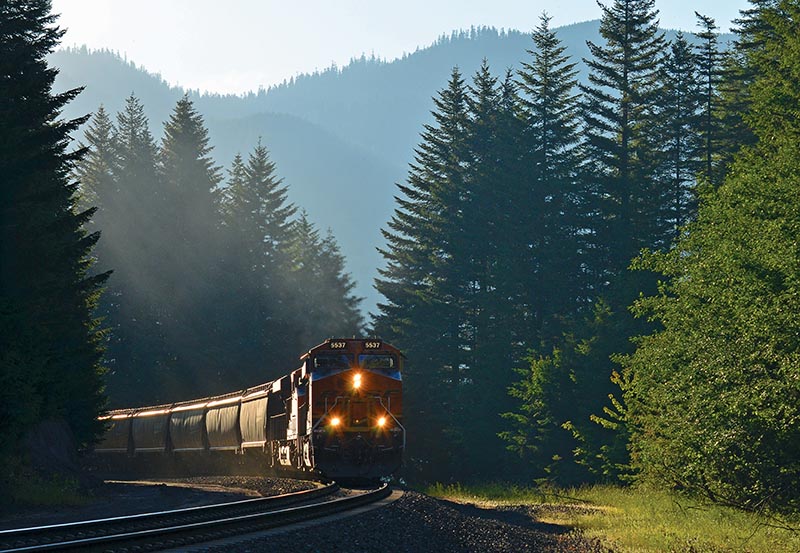 ABOVE: In the first rays of west slope sunlight on July 9, 2017, an empty grain train climbs out of Borup Loop, approaching a cut where Tunnel 6 once stood. NP eliminated several tunnels when it double tracked portions of Stampede Pass.

Read the rest of this story in the December 2021 issue of Railfan & Railroad! Subscribe Today!