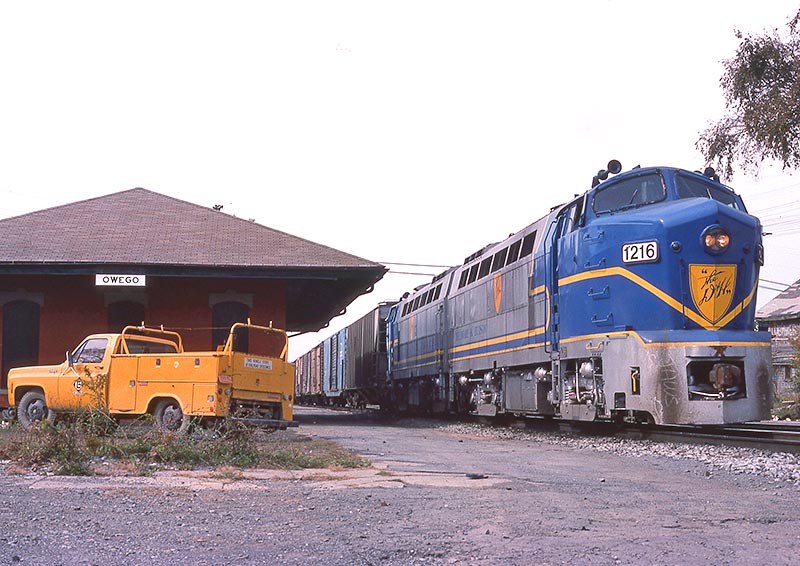 By Dale W. Woodland/photos by the author

I have always liked the jaunty design of Baldwin’s streamlined RF-16 cab units, which were quickly nicknamed “shark-nose” by railfans. The design is not like any other diesel locomotive profile of the postwar streamliner era. The styling was developed by famed industrial designer Raymond Loewy, and was based on his earlier work designing the body for Pennsylvania Railroad’s T-1 4-4-4-4 duplex steam locomotives that entered service in 1942. Production of the RF-16 lasted from 1950 through 1953, with 109 cab units and 51 cabless B-units built for only three railroads — Baltimore & Ohio, New York Central, and Pennsylvania Railroad. The sleek streamlined units quickly developed a good reputation as rugged and reliable freight haulers, often powering long, heavy coal drags well into the 1960s.

As a boy growing up in the Norristown, Pa., area during the early 1950s, I witnessed a variety of Baldwin power working on Reading Railroad. Baldwin diesels’ distinctive low-RPM engines had a deep-throated burbling sound. Pennsylvania Railroad also served the Norristown area from a small stub-ended yard on its Schuylkill Valley Branch in the east end of town, along with a connecting track to Earnest Yard on the Trenton Cutoff. End-cab Baldwin switchers were most numerous, serving a host of local industries. In addition to the plethora of switchers, PRR also employed its unique centercab Baldwin 2,400-hp RT-624 units on road trains between Philadelphia and the anthracite coal regions. In this area, there was little evidence that Baldwin was a minority diesel locomotive builder — not surprising, since they were designed and built in nearby Eddystone, Pa.

During this time, I was fortunate to have a junior high school friend whose father worked in PRR’s Norris Tower, resulting in us getting cab rides on the behemoth RT-624 switchers on transfer runs up the hill to Earnest Yard. In a lesson in perspectives, I longed to see PRR Baldwin shark-nose cab units, Alco FAs, or EMD F-units on the Schuylkill Valley Branch, not realizing until much later in life how rare those centercabs were. A trip with my father to Enola Yard near Harrisburg, Pa., was my first exposure to the Baldwin Sharks, as we saw a pair of cab units leading a carnival train into the yard. 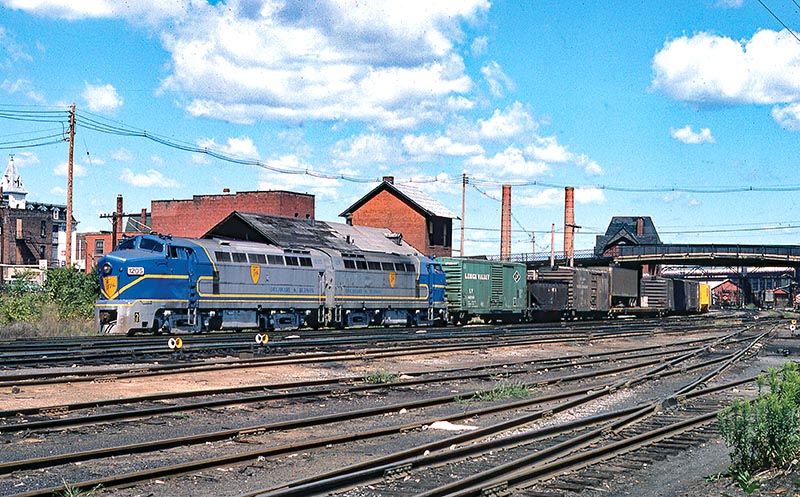 ABOVE: The Sharks are shoving their train north to reach Erie Lackawanna in Waverly to detour back to Binghamton on August 28, 1975.

In an interesting side note, while I was doing research for my first Reading diesel book (Reading Diesels, Volume 1: The First Generation, Garrigues House, 1991), I learned that Baldwin had evaluated a demonstrator A-B-B-A set of RF-16 shark-nose units on the Shamokin Division of the Reading on July 12, 1949. With positive results from the demonstration, Reading went as far as to assign a possible future order of Baldwin cab units to the low-number 400-series. I had to learn why Reading didn’t follow through with an order for Sharks. Armed with this knowledge, I contacted H.L. Broadbelt, a recognized authority on Baldwin locomotives, and his response was, “They had, but as AS-16 — the 1,600-hp road switcher configuration.” By this date, railroads were realizing the operating advantages of the road switcher carbody design versus cab units, and manufacturers reacted by converting production to that design. Often, I have daydreamed about how good the Reading first-generation cab unit paint scheme would have looked on those Sharks.

Hunting the Sharks
With new production of cab units essentially over by 1953, Baldwin diesels gradually disappeared from the rosters of Class I railroads and were scrapped by the late 1960s. With the purchase of my first SLR camera in 1970 and a subscription to Extra 2200 South (the seminal diesel spotters magazine of the time), I began a quest to hunt down locomotives from the minority builders; Alcos and Baldwins were the chief targets of these expeditions. 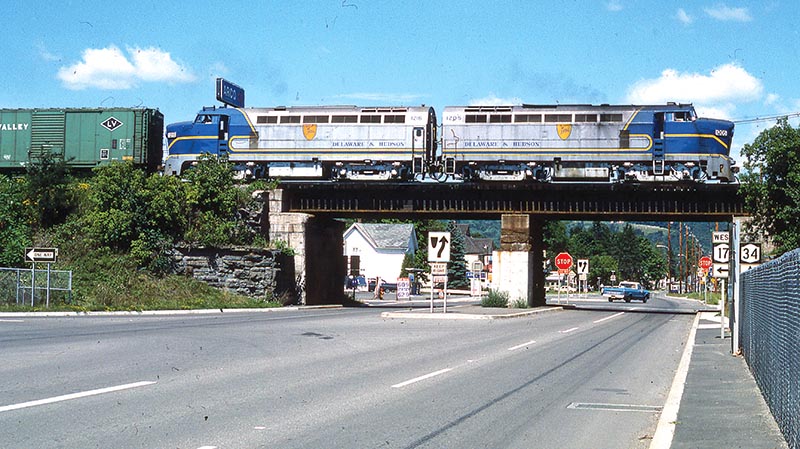 ABOVE: The Sharks are barely in New York State at Waverly, N.Y., as they cross Cayuta Street heading east on the Erie Lackawanna to Binghamton on August 28, 1975.

News that six former New York Central shark-noses (1205, 1207, 1209, 1213, 1216, and B-unit 3708) had been purchased by Monongahela Railroad in southwestern Pennsylvania put that area on my must-visit list. Three were sent to scrap in 1969, and B-unit 3708 went in 1970, leaving just two sole surviving RF-16s of the entire production run. It wasn’t until August 1974 that a friend and I spent several days on a trip to visit the Monongahela at Brownsville, Pa., along with stops at Cumberland, Md., and Sand Patch grade. However, it turned out we arrived in Brownsville exactly one week after the two remaining Sharks (1205 and 1216) had left the property for destinations unknown. This, of course, was the era before the internet and the instant sharing of information among fans.

Read the rest of this story in the December 2021 issue of Railfan & Railroad. Subscribe Today!