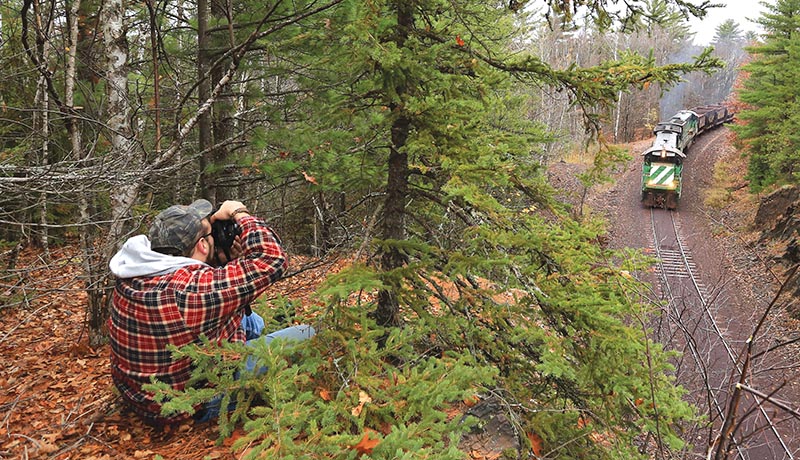 Photographer Ryan Kertis looks like a native “Yooper” as he frames up his shot of a 7 Tilden taking empties to the mine on October 30, 2016. —Steve McKay photo

By Steve McKay/photos as noted

It’s 7:30 in the morning when the radio comes to life. “Seven Tilden to the operator, over…” Crews going on duty for the morning begin their mark up and ask for permission out the east end to start their day of hauling iron ore on what is planned to be a “busy day.” Moments later, the small yard at Eagle Mills, Mich., will come to life with three crews working around each other to gather their trains and depart the yard. It’s time to document and chase some former Burlington Northern relics still earning their keep, chugging and barking like they have for more than 35 years.

Lake Superior & Ishpeming’s small roster of ex-BN U30Cs and C30-7s are called “The Greens” because they still wear their as-delivered Cascade Green paint — and it’s an easy way for the operator (dispatcher) and the crews to distinguish what power they have or are to grab. Known for having big, vintage, six-axle horsepower (including Alco RSD-12s and RSD-15s, and GE U23Cs, U25Cs, and today’s “Greens”), LS&I has always been a railfan Mecca, hiding in the thick, dense woods and iron ore mines of Northern Michigan.

The death sentence for the Alco and early GE fleet began in 1989 when LS&I purchased the first of 15 Burlington Northern U30Cs to haul iron ore to the shores of Lake Superior. In addition, LS&I also purchased a fleet of ex-Detroit Edison U30s for parts, though they did see some action at the beginning and were briefly leased out to Wisconsin Central before being brought back to the deadline to keep the ex-BN fleet operational. Ten years later in 1999, LS&I would purchase four former BN C30-7s, numbered 3071–3074, to add to the fleet of U30s. 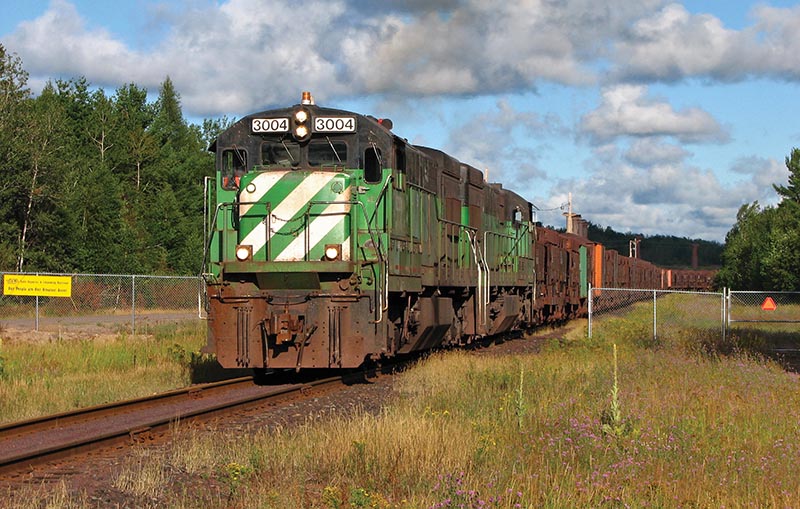 ABOVE: A pair of now-retired and scrapped General Electric U30Cs leads a train of fresh Tilden pellets around the wye at Eagle Mills Yard on August 9, 2008. —Steve McKay photo

Fast forward to 2021 — there are only five of the classic GE units still on the property, including three U30Cs and two C30-7s. The rest have been scrapped after being parted out over the years, starting with the former Detroit Edison units. Additionally, most of the GEs were displaced with the lease of six CEFX AC4400CWs starting in early 2010.

Along the Railroad
Today’s Lake Superior & Ishpeming lies on the shores of Lake Superior in Marquette, Mich., and stretches 20 miles inland to Cleveland-Cliffs Tilden Mine. The railroad is a far cry from the roughly 100-mile-long system it once was, but it still has the same sole purpose — hauling iron ore pellets from the mine to the docks. While the railroad may be only 20 miles long, it hauls more tonnage than most of the other Michigan short lines combined. On a busy day, the railroad will move upward of 720 loads of iron ore from the mine to the dock in Marquette. Add to that roughly five cars of clay to the mine plus tank cars, and roughly 40–50 loaded “vans” (100-ton ore cars) interchanged to Canadian National daily, and you have a hopping railroad. 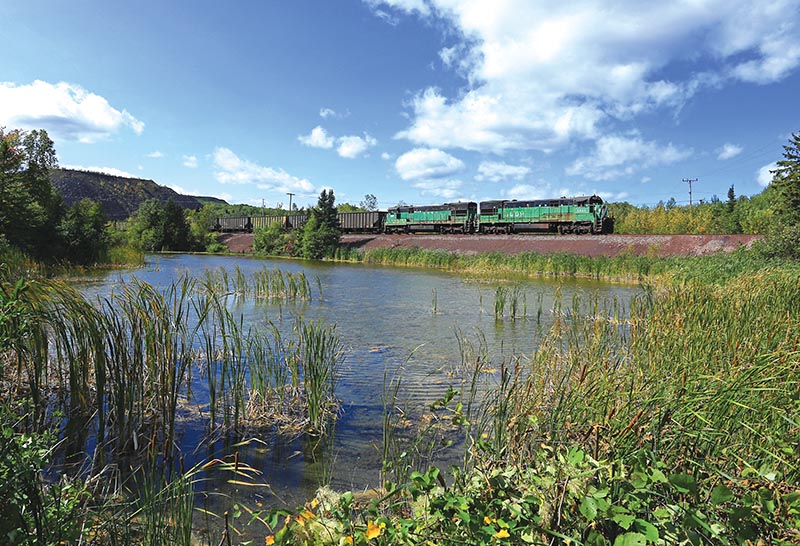 ABOVE: An 0700 Weigher with a pair of U30Cs rolls through Empire Junction with a loaded train of vans for CN at Partridge Yard on September 13, 2020. —Steve McKay photo

Railroad operations are heavily dictated by the Great Lakes shipping season that runs from late March to mid-January, since all the ore produced at Tilden is sent out by lake freighters (minus the previously mentioned interchange to CN). During the shipping season, the railroad averages from four crews a day when there are no boats scheduled or they haven’t been in for a day or two, to up to 10 crews when ships are scheduled back-to-back; the busiest days are the best bet for the Greens.

Unlike the Duluth, Missabe & Iron Range docks in Two Harbors and Duluth, Minn., LS&I’s dock at Presque Isle in Marquette has no ground storage, resulting in the railroad going into an almost hibernating state for the off-season once the dock and all the ore cars are loaded for the next season. During the winter months, the railroad runs, at most, two crews a day on an as-needed basis — one to load and interchange the vans to CN and one to pull/spot the clay and tank cars at the mine. The off-season will normally find only the CEFX AC4400CWs working as the railroad needs only two operational units, with a third on standby in case one of the others develops mechanical issues…

Read the rest of this story in the November 2021 issue of Railfan & Railroad. Subscribe Today!