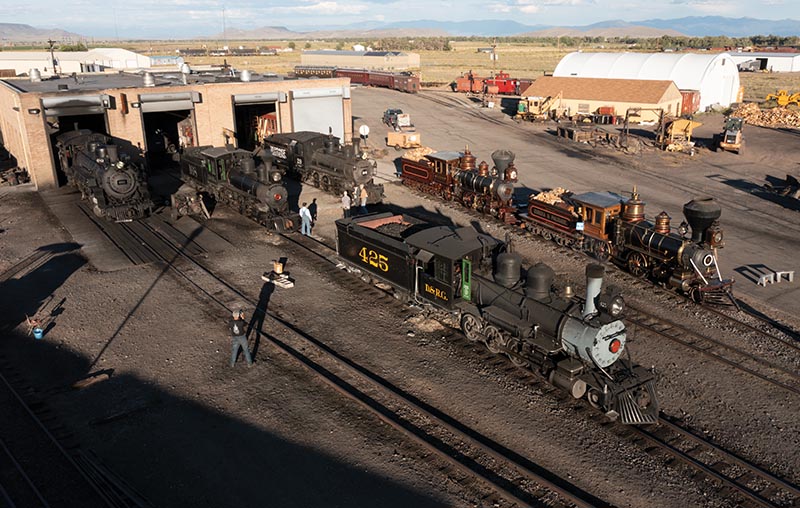 By Jeff Terry/photos as noted

“It’s magic.” Those were the words Cumbres & Toltec Scenic Railroad chief mechanical officer Stathi Pappas used to describe the Victorian Iron Horse Roundup held between August 21 and 29, 2021. The special featured five meticulously restored locomotives dating from the late Victorian era. The Roundup was held to mark the golden anniversary of C&TS, whose mission for the past five decades has been to spur tourism in southern Colorado and northern New Mexico by preserving Denver & Rio Grande Western’s route (including vintage structures, cars, and locomotives) between Antonito, Colo., and Chama, N.M., as it existed in the mid-20th century. For the Roundup, C&TS returned to an even earlier time period — one of oil headlamps, funnel stacks, and greasepaint. A full week of trips behind four 19th-century relics dating from the 1870s–1890s was operated from both terminals. But before we get to the Roundup itself, let’s meet the players.

Carson & Tahoe Lumber & Fluming 2-6-0 Glenbrook (Baldwin, 1875): Glenbrook, the oldest locomotive in attendance, was used for logging service in Nevada before being sold to Lake Tahoe Railway & Transportation Company in 1898. Retired in 1925, it was then used as a parts source by Nevada County Narrow Gauge. 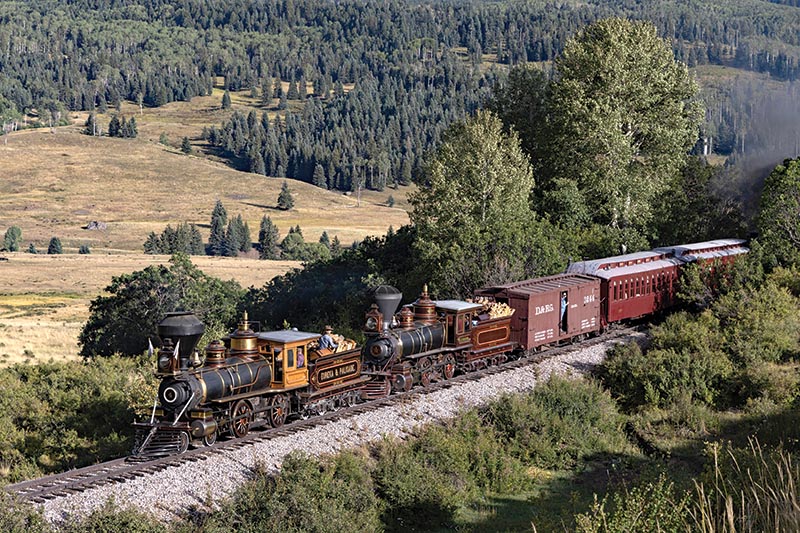 ABOVE: On the evening of August 28, Eureka and Glenbrook are running downgrade between Cresco and Dalton, Colo., after an aborted trip to Cumbres Pass due to a faulty blower line on Eureka. —Jeff Terry photo

In 1943, the 2-6-0 was donated to the Nevada State Museum in Carson City and placed on outdoor display, where it remained until 1981 when it was moved to the Nevada State Railroad Museum. A three-decades-long restoration, which included a return to its original 1875 appearance, was completed in 2015. In 2021, Glenbrook was modified with the addition of air brakes, which allowed it to pull trains during the Roundup. It was presented as a representative of 1875 wood-fired steam.

Eureka & Palisade 4-4-0 No. 4 Eureka (Baldwin, 1875): Eureka pulled freight and passengers in central Nevada until 1896 when it was acquired by Sierra Nevada Wood & Lumber Company. In 1939, it became the property of Warner Bros. and was subsequently used in numerous movie and television show productions.

After being damaged by fire in 1985, the 4-4-0 was purchased by Las Vegas attorney Dan Markoff, who completed a top-to-bottom restoration in 1991. Eureka last operated on C&TS in 1997, and its 15-year FRA inspection was finished in 2017. The 4-4-0 is world-renowned as one of the finest examples of 19th-century steam power in existence. It was also presented as a representative of 1875 wood-fired steam. 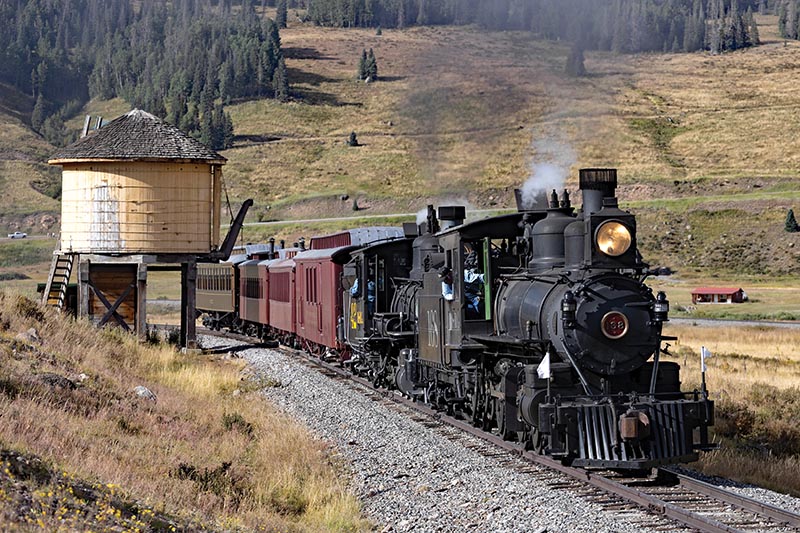 ABOVE: D&RG 168 and 425 pull away from the water tank at Los Pinos, Colo., during their journey from Antonito to Chama on August 27. —Jeff Terry photo

Denver & Rio Grande 4-6-0 No. 168 (Baldwin, 1883): D&RG’s Class T-12 Ten-Wheelers were used in passenger service across Rio Grande’s narrow gauge network. The 168 operated on routes in Colorado and New Mexico, including the line over Cumbres Pass, and for many years it pulled the regular passenger train between Salida and Alamosa.

Retired in 1938, it was presented to the city of Colorado Springs and placed on display in Antlers Park, where it remained until 2015 when the city approved a long-term lease to C&TS. The 168 was trucked to Antonito and rebuilt by C&TS’ shop crew, led by Stathi Pappas, and made its first runs under steam in 2019. It has been restored to its 1915 appearance, which was the year Rio Grande’s Burnham Shops fitted it with a new boiler, cab, and tender. 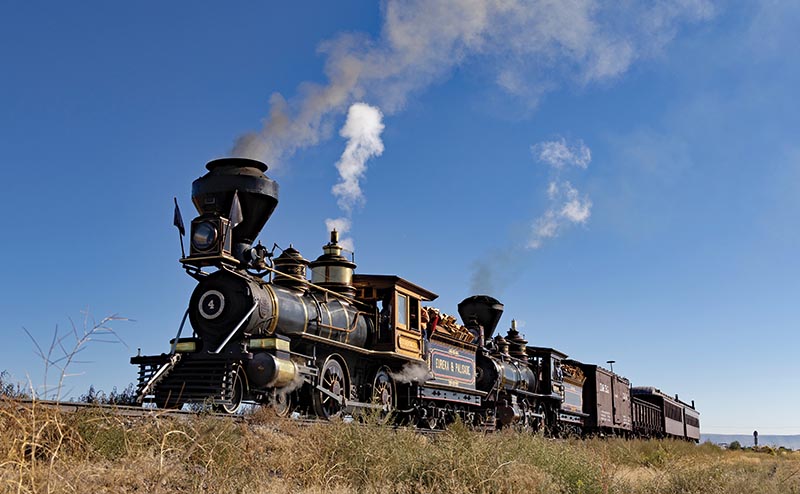 ABOVE: Prior to the mixed train departing on August 28, a quick test run was made to determine if Eureka and Glenbrook would be able to handle the consist of a rider gondola, boxcar, and two vintage D&RG coaches on a photo charter to Big Horn. They could. —Jeff Terry photo

The engine is known to have worked in freight service out of Chama in the early 1920s before being leased to Rio Grande Southern. The 315 finished up its career as the Durango yard switcher, then was donated to that city and placed on display in 1950.

Beginning in 1998, it was fully restored by the Durango Railroad Historical Society, making its first runs under steam in 2007. Based out of Chama since 2015, the 315 was backdated to its 1917 appearance, complete with gold lettering for the Roundup. It was presented as a representative of coal-fired steam.

Rio Grande Southern 4-6-0 No. 20 (Schenectady, 1899): Rio Grande Southern 20 was not only the newest locomotive in attendance, but the only one not manufactured by Baldwin. It was originally Florence & Cripple Creek’s Portland, outshopped by Schenectady Locomotive in New York in 1899, before its acquisition by RGS in 1915 for use on the line between Durango and Ridgeway, Colo. It was retired in 1951 and acquired a year later by the Rocky Mountain Railroad Club, which displayed it first in Alamosa and then in Golden at the Colorado Railroad Museum.

In 2006, the museum embarked on a 14-year, $1.5 million restoration —spurred by a generous donation from the Moedinger family of Pennsylvania — that was completed in 2020. Still in mostly original condition, the 20 has been restored to the way it looked between 1944 and 1947 with the famous RGS “sunrise” herald on its tender. It was also presented as a representative of late-era coal-fired steam…

Read the rest of this story in the November 2021 issue of Railfan & Railroad. Subscribe today!