The full range of old, middle-aged, and new MBTA transit vehicles meet at Ashmont Station in Boston on February 12, 2021. From top to bottom are a Traction Orange PCC trolley from 1945, a center Red Line train from 1969–70, and the headlights of a new 2020 Red Line car just visible inside the station.

By Tim Doherty/photos by the author

“Is there room for nostalgia at the T?” asked CommonWealth, a Boston based policy journal, in 2017 about the 70-year-old vintage Presidents’ Conference Committee (PCC) streamlined trolley cars in daily service between Ashmont and Mattapan on the southern edge of Boston and the neighboring town of Milton. Massachusetts Bay Transportation Authority’s chief operating officer raised the issue in passing the year before while discussing the challenges of maintaining the fleet of vintage rail cars. Instead, he suggested replacing them with buses and turning the line into a paved busway. The immediate pushback from community members and political leaders, as well as infrastructure factors, caused MBTA to rethink the change, likely providing another reprieve for the oldest continually operated PCCs in North America.

MBTA, or “the T,” as it is more commonly known, is the fourth-largest transit system in the U.S. Serving 171 cities and towns across eastern Massachusetts and operating all modes of service from trolleybuses to ferry boats, MBTA is as complex as it is old. Formed from the originators of the first “streetcar suburbs” and the first subway in North America, the system expanded in size as Boston Elevated Railway acquired its competitors. Later, it transitioned from private to public ownership as Metropolitan Transit Authority (MTA) in 1947, and then evolved into MBTA in 1964. 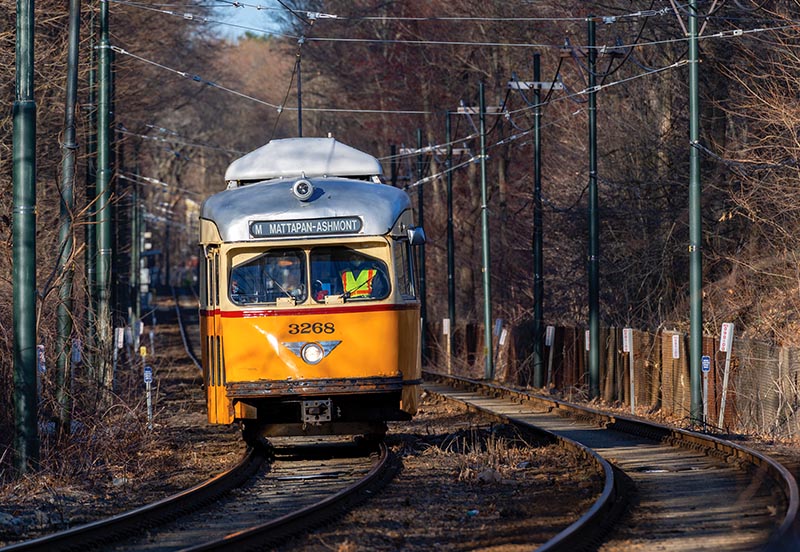 Viewed over the fence from the Neponset Greenway path, PCC 3268 is at the end of the long tangent between Central Avenue and Capen Street on April 3, 2021. Built mostly on the former New Haven right-of-way, the Greenway path closely follows the Mattapan Line right-of-way from Shawmut Junction to Ashmont.

As the transit authority expanded to attract and serve a wider suburban ridership, the large, aging network of streetcars in the suburbs was mostly converted to bus operation. The remaining lines would become the MBTA Green Line rapid transit line and the Mattapan-Ashmont High Speed Line.

The fate of the Mattapan PCCs hung in the balance in the wake of a systemwide breakdown during winter 2015. Four back-to-back blizzards shut down large sections of the MBTA system for weeks, including the Mattapan Line, which was closed for three weeks and replaced by bus shuttles. These massive MBTA service failures forced a broad public reckoning on the physical and fiscal state of the system that continues to this day. Currently, MBTA is making significant investments in infrastructure and equipment that will replace the fleets of cars on the Red, Orange, and Green lines while improving the system’s state of good repair. 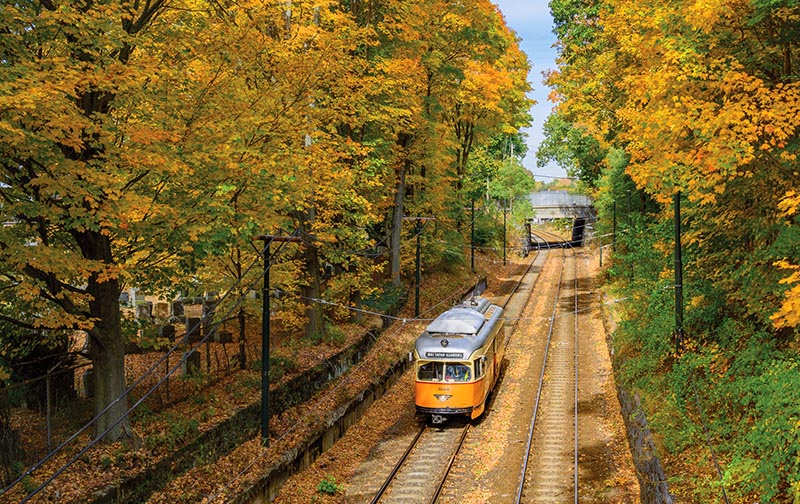 The Mattapan Line splits the Cedar Grove Cemetery in a cut between the bridges at Adams Street and a cemetery road. In the fall, trees on either side provide a bright blast of color, such as on October 20, 2019, and a short stepladder can be helpful to capture them.

The 2.6-mile Mattapan-Ashmont High Speed Line is home to the eight remaining PCC cars operated by MBTA. Their 76 years of continuous service are a testament to the design of the Presidents’ Conference Committee, which brought together executives from the streetcar companies with equipment builders to design a revolutionary streetcar; Boston’s 344 PCC cars began running in 1937.

The Mattapan cars came from three different orders from Pullman-Standard’s Worcester plant during World War II and were delivered from 1944 to 1946. These “Wartime” Boston cars were “Air-Electrics” with air operated doors, windshield wipers, and low-speed brakes. Higher-speed braking was dynamic. The MBTA PCCs are, after the St. Charles streetcars in New Orleans, the second-oldest continuously operated public transit vehicles in North America…

Read the rest of this story in the September 2021 issue of Railfan & Railroad. Subscribe Today!