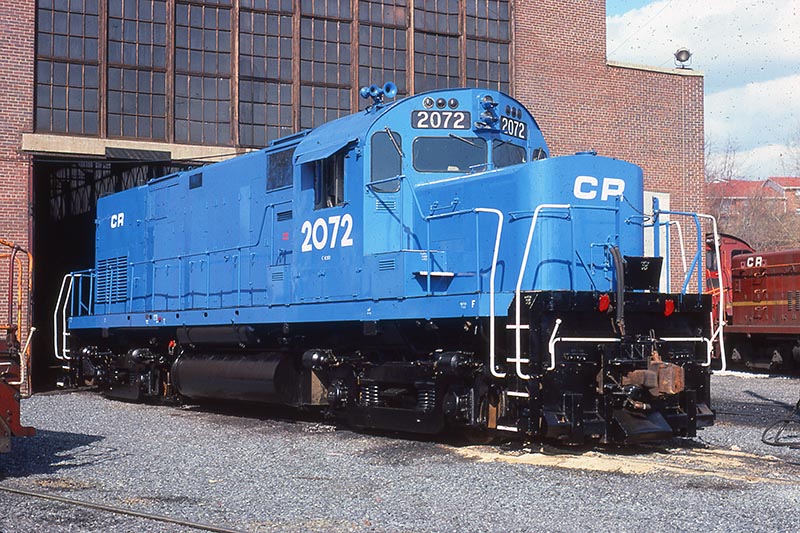 Whether or not you are an astute art enthusiast, at a minimum you probably know that Rembrandt was a well-known painter. You probably remember from some art class that he was of Dutch origin, lived in the 1600s, and in his later years made some questionable decisions related to his personal life. Whatever your art background may be, there is no question that Rembrandt was a master of portraiture, landscapes, and narratives. Some of his works include “The Raising of Lazarus,” “Christ in the Storm on the Sea of Galilee,” and “The Ascension.” Rembrandt’s name is inextricably linked with fine art.

Most art critics would be astounded to know there was another artist of the same name producing masterpieces in the late 1970s in the Lehigh Valley region of eastern Pennsylvania. While not widespread, his artwork gave Bethlehem Engine Terminal some notoriety.

After the April 1, 1976, inception of Conrail, motive power slowly began to be repainted into the new corporate colors and logo. This was done only after a heavy overhaul, rebuild, or inspection, since the new railroad was short of motive power, and couldn’t afford to take units off-line just to get new paint. Cycling units through for paint was mainly done at the former Pennsylvania Railroad shop in Altoona, Pa., and the former New York Central shop at Collinwood, Ohio. The job of renumbering the fleet was accomplished at these facilities, as well as some smaller shops, such as the former Erie Lackawanna Scranton Diesel Terminal and the former Lehigh Valley/Jersey Central Bethlehem Engine Terminal in Pennsylvania. These facilities were equipped to handle the minor task of painting out the former owner’s logo and temporarily placing its new Conrail road number on the unit until it could be properly overhauled and given a full corporate paint job. Some locomotives would get only the temporary “patch job” and renumbering before they were retired. This was especially true of minority builders’ products (such as Alco and Baldwin), as well as technologically obsolete locomotives that were needed for the short-term. By 1977, the repainting and renumbering of the Conrail fleet was well underway. 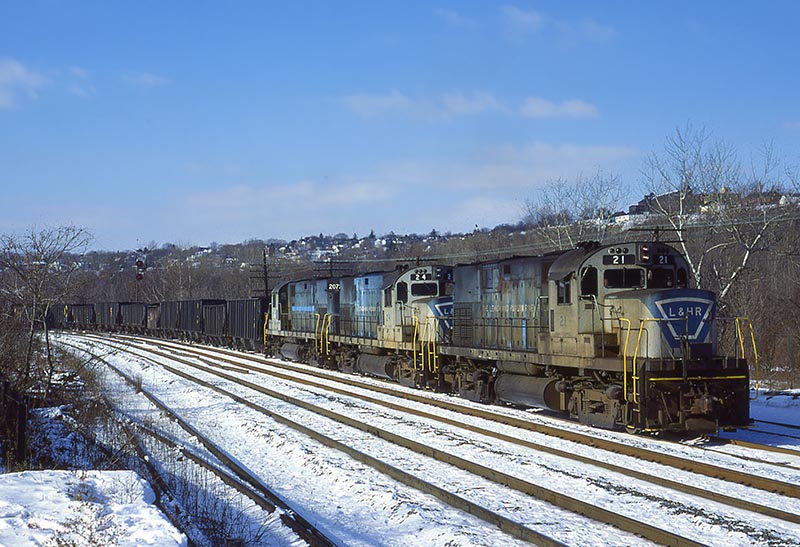 The rainbow of color at Bethlehem in the early days of Conrail was impressive. Lehigh Valley Cornell Red, Reading yellow and green, Jersey Central Coast Guard red, and Erie Lackawanna maroon and gray all made for stark contrast against the austere black Penn Central units. Then there were those blue and gray units of Lehigh & Hudson River Railway. Part of Conrail’s nearly 5,000-unit initial roster consisted of six Alco Century 420 locomotives from L&HR.

L&HR 21 was unique on the Conrail roster. Being built in June 1963, it held the distinction of being the first Alco Century 420 constructed. The 21 and sister 22 (22 was sold by L&HR in July 1972 for $80,000 to the Morton Terminal, Ltd./Essex Terminal Railroad of Windsor, Ont.) were also constructed differently from all other subsequent C-420s and Century-series locomotives that Alco produced. The electrical cabinets on the back wall of the cab were carbon copies of what Alco installed in the RS-32 (predecessor to the C-420) and RS-36 models. All the electrical components were hard-wired in the cabinet. Subsequent units employed the “card” system where modular circuit boards could be plugged in and replaced in the field if one failed, rather than having to go back to the shop for repair. While part of their small six-unit fleet of Century 420s, the unit was electrically similar to the RS-32s Conrail had on its roster.

Immediately after the inception of Conrail, the C-420s were reassigned to Bethlehem Engine Terminal from the former carrier’s home terminal of Warwick, N.Y. Though they were relatively young units, having been constructed between 1963 and 1966, and mechanically sound, they were outcasts on a railroad trying to standardize on EMD and General Electric. These units, though needed short-term, were not intended to be permanent fixtures on the roster. As such, they were slated for a simple “patch job” and renumbering as they came due for inspection or light repair. 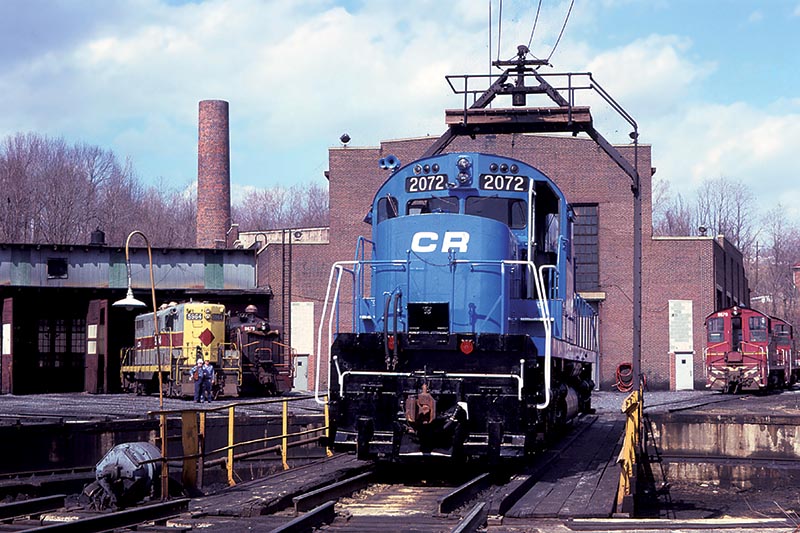 ABOVE: With shop workers observing, the “official” unveiling of Conrail 2072 in fresh blue paint was April 8, 1978, at 2:00pm.  —Dan Bednar photo, author’s collection

The L&HR Alcos were no strangers to the Allentown area, having operated into the region on a daily basis until November 1971. In the early Conrail days, the engines felt right at home and spent most of their time operating over former home rails. The Conrail renumbering program eventually caught up with these units as well. When ex-L&HR 21 was moved dead to Bethlehem on November 18, 1976, it was thought that it would receive its new Conrail road number, 2072, then or shortly thereafter. To the surprise of many, the unit was returned to service with its L&HR paint and numbers intact. However, its day for renumbering finally arrived in mid-January 1977. A simple painting-out of the L&HR logo on the nose and applying a small “CR,” blotting out the old name on its hood, and placing a small, white “CR 2072” on the cab was supposed to take care of this unit’s decoration for the remainder of its Conrail career.

It rejoined its brethren still wearing L&HR colors and returned to productivity for its new owner. A little more than a year later, it would catch the eye of a young, sympathetic, curious car inspector and carpenter at Bethlehem Engine Terminal named Jimmy Hulsman. Both would become legends in the local annals of railroading…

Read the rest of this article in the October 2021 issue of Railfan & Railroad. Subscribe Today!