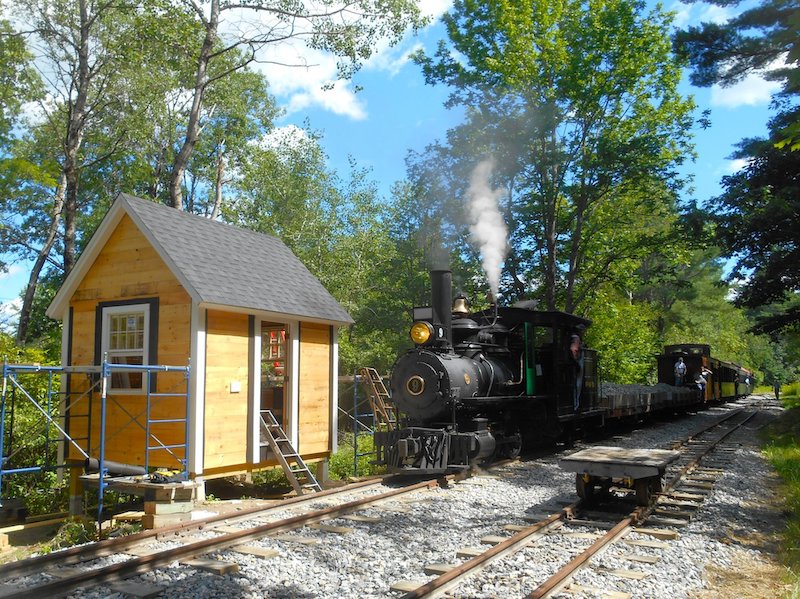 ALNA, Maine — This weekend, the Wiscasset, Waterville & Farmington Railway will begin revenue service on its newly extended main line, capping off more than three decades of work rebuilding a section of one of the famous Maine Two Footers.

The new section of track has been dubbed the “Mountain Extension” and gives the museum 3.5 miles of track connecting Sheepscot Station with Trout Brook. In recent months, the museum has installed a turntable — one that originally belonged to the Bridgton & Harrison Railroad — and a new station. Not far from the new end of the line is the Trout Brook bridge, a Howe pony truss-covered bridge built for the Boston & Maine in New Hampshire and moved to the museum a few years ago.

The WW&F Railway Museum began laying track north of Wiscasset, near the village of Alna, back in the early 1990s on the original right of way. Along with 3.5 miles of track, it also has multiple stations, a shop, roundhouse, water tower and more, all based on structures built by the original railroad that ran until 1933.

On Saturday, August 6, the WW&F will run its first revenue passenger train over the bridge to the end of the line. Among the passengers will be members of the Massachusetts Bay Railroad Enthusiasts. The MBRRE hosted the last fan trip over the bridge when it was still on the B&M branch to Berlin, N.H., decades ago and now they’ll get to host the first over it at its new home. After that, a ceremony celebrating the opening of the extension will occur and then the line will be officially opened for service.

On August 13 and 14, the museum is hosting its annual picnic, a weekend-long celebration for members and the public that features special excursions, including a photo freight.