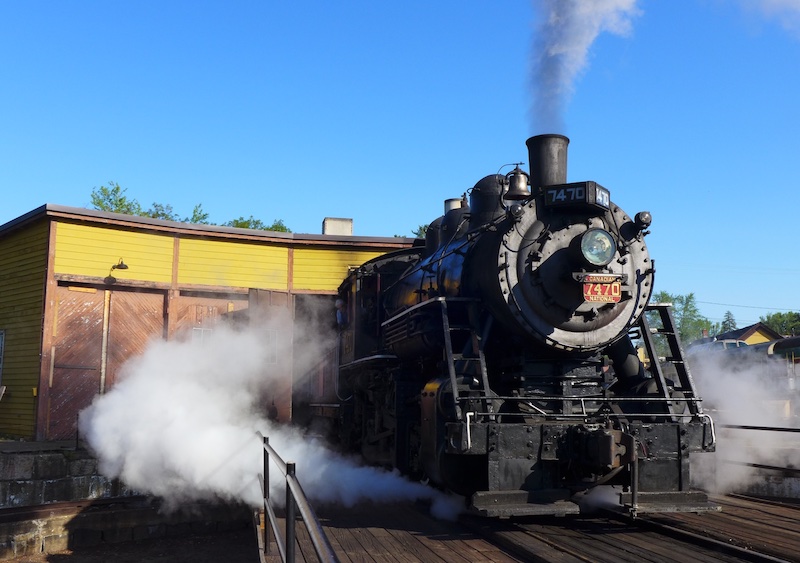 Officials tell Railfan & Railroad that Canadian National 7470 will be running every weekend in August. The locomotive is seen on the Conway Scenic’s turntable last month. Photo by Brian Solomon.

Brian Solomon, manager of marketing and events for the railroad, tells Railfan & Railroad that locomotive 7470 will be running on the railroad’s Valley Trains between North Conway and Conway three times a day at 9:15 a.m., 11 a.m. and 3:30 p.m.

The 101-year-old locomotive returned to service earlier this summer after being damaged in a fire over the winter. CN 7470 was parked in the former B&M roundhouse built in 1874 and was scheduled to lead a special excursion in early January. However, early on the morning of that planned run, a fire started inside the locomotive’s cab, damaging seats, gauges, electrical wiring and more, according to the railroad. The fire also melted a spring in the locomotive’s whistle control valve, which in turn set off the whistle, alerting an employee who was on-site at the time. The employee called 911 and the North Conway Fire Department responded to the scene. They quickly doused the flames before the fire spread. The railroad said it believed that the fire was sparked by the locomotive’s radio.

The locomotive finally returned to service in June and since then the railroad has been training crews on it. It’s been a number of years since the locomotive ran with any regularity. After September 4, Solomon said the railroad will be focusing on its busy fall foliage season, although it’s possible that the locomotive will run a few more times after that this year.