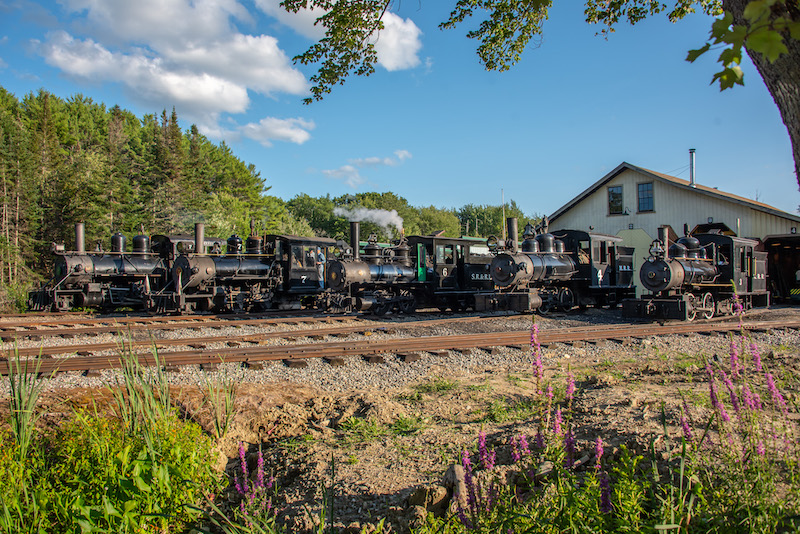 The restoration of Monson 4 and Bridgton & Harrison 8 would mean that all five surviving locomotives from the Maine 2-footers would be running. All five locomotives are seen in Alna, Maine on July 31, 2021. Photo by Steve Barry.

PORTLAND, Maine — The Maine Narrow Gauge Railroad Co. & Museum is teaming up with Maine Locomotive & Machine Works to restore two historic 2-footers: Monson Railroad 0-4-4T 4 and Bridgton & Harrison 2-4-4T 8. The restoration of locomotives 4 and 8 would mean that all five surviving steam engines from the legendary Maine 2-footers would be in operating condition at the same time for the first time in the preservation era.

Presently there are three Maine 2-footers in operating condition: Monson 0-4-4T 3, B&H 2-4-4T 7 and Wiscasset, Waterville & Farmington Railway 0-4-4T 9, which has the unique distinction of also being the only surviving locomotive from the Sandy River & Rangeley Lakes and Kennebec Central Railroad. The B&H and Monson locomotives are owned by Maine Narrow Gauge of Portland and the WW&F 9 is owned by the WW&F Railway Museum in Alna, Maine. A collaboration between MNG and WW&F, however, means that the Portland-owned locomotives can often be found in Alna. Last week, all five steam locomotives were lined up together for a photoshoot at the WW&F Sheepscot Yard.

Eric Mencis with MNG said the museum plans on starting with the smaller of the two locomotives, Monson 4, which was built by Vulcan Iron Works in 1918 for the slate-hauling railroad in the northern part of the state. B&H 8 was built in 1924 by Baldwin and is the largest of the surviving 2-foot-gauge locomotives.

When the locomotives are put back in service it is likely that they will operate in both Portland and Alna. A few years ago, MNG lost its museum space to development, but from that challenge came opportunity. In 2019, the two museums teamed up to house much of the MNG equipment in Alna, where a new car barn has been constructed to house it. The MNG continues to operate excursions on the Portland waterfront. The Portland operation benefits from being close to the busy Old Port and the Alna operation, located in the woods north of Wiscasset, offers an authentic glimpse of what narrow gauge railroading in Maine looked like a century ago. Mencis said the two very different venues are the key to the success of the collaboration.

The Monson and B&H were among the last 2-footers in operation in the 1940s and much of the equipment from those two railroads ended up on the Edaville Railroad in Massachusetts, where it ran until coming home in the 1990s. While Edaville had preserved the equipment, the boilers they put on the locomotives were not up to modern standards and because of that MNG has had to replace the pressure vessels on 3 and 7. Mencis said the same thing will happen with 4 and 8. No timeline for completion has been set.

Although all four B&H and Monson engines have been restored to operation in the past, specifically at Edaville, they have never been in operation at the same time as WW&F 9 in the preservation era. Locomotive 9 was the only Maine 2-footer not to go to Edaville and was purchased by a group of Connecticut railfans in the 1930s. It was kept in an old barn until returning north to Maine in the 1990s and being restored to service a few years ago.

The prospect of having five narrow gauge steam engines under steam is enticing, Mencis said.

“Both museums have also put on great events recreating scenes from Maine’s past (at the WW&F in Alna) combining the equipment and operating it all together,” Mencis said. “Having 4 and 8 back in operating condition will be a great addition to these events.”

Visit the MNG website to donate to the restorations.