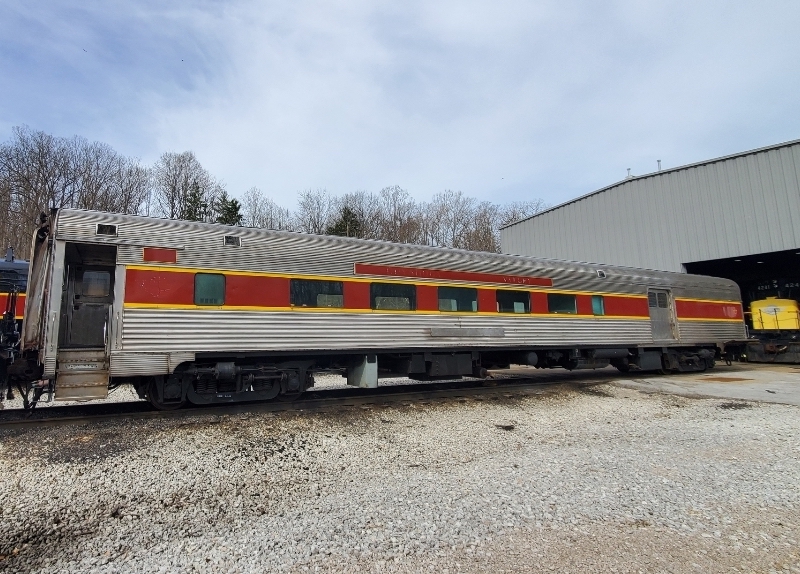 OAK RIDGE, Tenn. — The Southern Appalachia Railway Museum announced Saturday that it had acquired the last passenger car needed to restore the Central of Georgia’s Man o’ War pocket streamliner. The group believes it is the first time that a non-articulated, standard gauge train set has been brought together like this in the preservation era.

The Man o’ War was a four-car passenger train that ran twice daily from Atlanta to Columbus, Georgia, starting in 1947. The train was named after a famous racing horse of the area. The cars were purchased together from the Budd Company. The CofG would later merge with the Southern Railway and the cars would be used on that railroad’s passenger trains until 1979 (The Southern didn’t join Amtrak until then). In the 1990s, SARM acquired two of the cars and for years, volunteers wondered what had happened to the other two. In 2013, the observation car, dubbed Fort Benning, was found on a dead-end track at a shopping mall in Yakima, Washington. East Tennessee Rail Car Services teamed up with the museum to bring the car back south.

Now the fourth and final car has been acquired from the ​​Cuyahoga Valley Scenic Railroad. It and the observation car will be restored to service and then all four cars will be put back into their original configuration.

“We never thought this project would be feasible. Especially in the early years we’d sit and discuss or daydream about how fun it might be to do it one day, but never once believing it could be pulled off or we could pull it off. Chris Williams, who passed away unexpectedly in 2016, kept us passively focused on the project for years and always pushed the agenda when the opportunity arose. I think he’d be thrilled right now.” said Charles Poling, SARM Museum Director and President East Tennessee Rail Car Services, Inc.

The Southern Appalachia Railway Museum was founded in 1990 and until a few years ago ran regular passenger excursions.