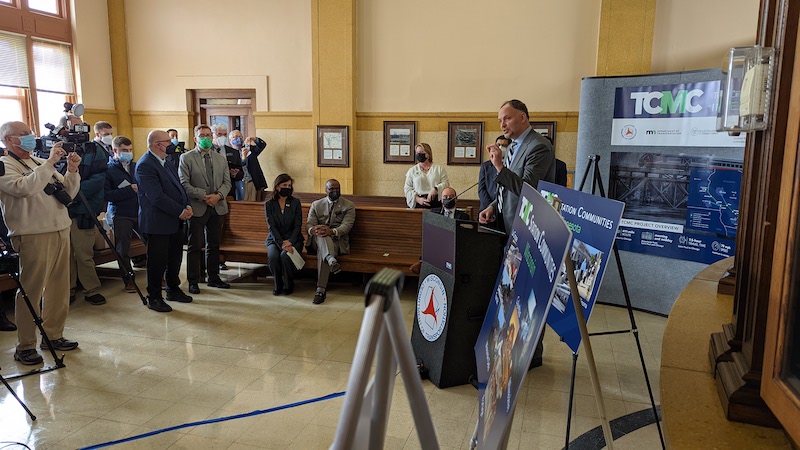 Amtrak said the investment will double the number of round trips between the Twin Cities, Milwaukee and Chicago. Amtrak President and CEO Stephen Gardner spoke at an event in Wisconsin this week. Photo Courtesy of Amtrak.

LaCROSSE, Wis. — Amtrak is expected to begin operating a second train along its Empire Builder route between Chicago and the Twin Cities between now and 2024, thanks to a $31.8 million investment by the federal government announced this week. Amtrak President and CEO Stephen Gardner and other officials hosted an event in LaCrosse, Wis., on Wednesday to announce the funding.

Presently, Amtrak operates multiple trains a day between Chicago and Milwaukee, but only one each way between the Twin Cities and Milwaukee. The money will go toward track and station improvements that will benefit both passenger and freight service. The money is being made available through the Federal Railroad Administration’s Consolidated Rail Infrastructure and Safety Improvements (CRISI) Grant Program and will go to the Wisconsin Department of Transportation and the Minnesota Department of Transportation.

“This vital rail project came together because the federal government not only recognized its importance to the region but the extraordinary collaboration among states, local economic groups and freight and passenger rail,” WisDOT Secretary Craig Thompson said. “The team effort we are celebrating today brings us a stronger and more diverse transportation infrastructure that strengthens supply chains, connects businesses and universities, and brings us all closer together with more travel options.”

During the event, Gardner said that service expansion would be possible in large part because of Amtrak’s productive relationship with the host railroad, Canadian Pacific. The following day, Amtrak announced that CP had gotten an “A” grade as a host railroad for the sixth year in a row, making it the best performing Class I. Gardner gave CP President and CEO Keith Creel the award in person at Chicago Union Station this week.

“We’re proud of the Amtrak-CP partnership and we applaud you and your team’s continued commitment to providing outstanding service to our passengers. Congratulations on six years straight as Amtrak’s best performing host railroad,” Gardner said.