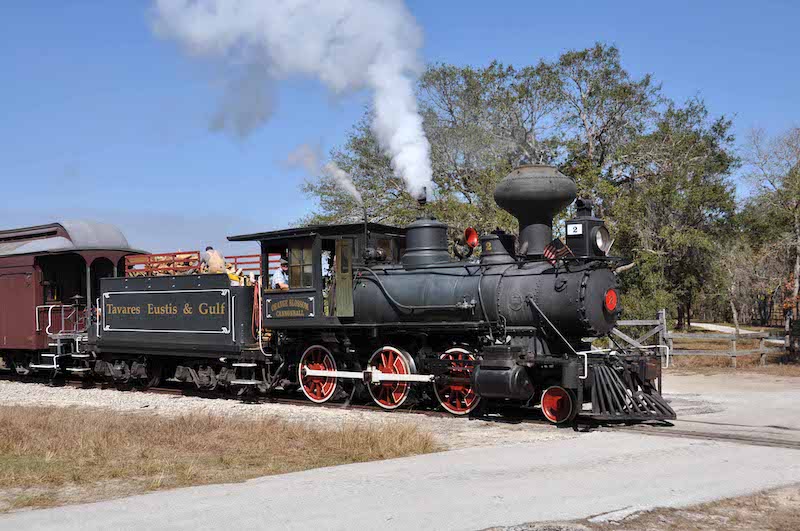 Fundraising is underway to bring former Tavares, Eustis & Gulf 2-6-0 2 to Georgia in time for October trips. Photo by M.T.Burkhart.

St. MARYS, Ga. – The Georgia Coastal Railway, which runs tourist trains over a portion of the St. Marys Railroad, is working to bring a famous Baldwin 2-6-0 to its operation by the fall. Fundraising is underway to transport former Tavares, Eustis & Gulf 2 to Georgia in time for October trips.

Built in 1907 for the timber industry, the wood-fired locomotive last ran several years ago as the “Orange Blossom Cannonball” between Mount Dora, Eustis and Tavares, Florida. Following its stint on the Cannonball, the locomotive returned to its home base in Arkansas.

The steamer requires inspection and likely some new tubes, but Brian Young, director of reservations and marketing, said the engine is in great shape and should not need anything major. It will receive a new coat of paint, but the scheme and what lettering it will wear on the tender is yet to be determined.

“It will bring so much power behind our marketing,” Young said. “And we will operate it quite a bit.”

The locomotive has an impressive resume of movie appearances, including “True Grit,” “Appaloosa,” “3:10 to Yuma,” “There Will Be Blood,” and “O Brother, Where Art Thou” among others. It’s hoped 2 can be ready for “Wild West” trains planned for early October, Young said.

Georgia Coastal was founded by several folks who were involved with the Royal Palm Railway Experience (Orlando & Northwestern Railway) before that operation in Florida shut down. Some of its equipment, including former Tennessee Valley Railroad GP7 1912, was moved to Georgia. It has been running regular excursions, as well as popular dinner, theater and themed trips this season.

The group has a goal of raising $18,000 for repairs and transportation of the Mogul to St. Marys, Young said. For more information or to donate, visit www.thegeorgiatrain.com.