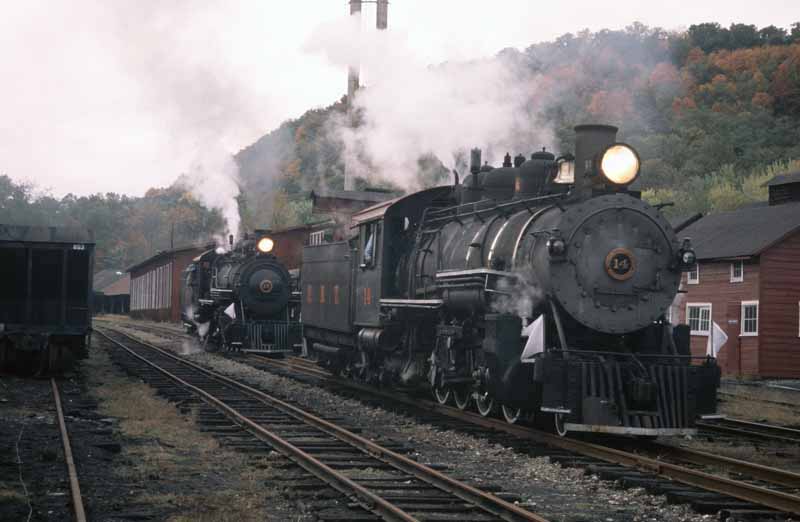 Scenes like this may soon be repeated as the EBT Foundation works to reopen the historic narrow-gauge East Broad Top for regular service later this year. Photo by M.T.Burkhart.

ORBISONIA, Pa. – It’s been nearly a year since the non-profit EBT Foundation announced the purchase of the storied narrow gauge East Broad Top, and work continues at a rapid pace to reopen the railroad for regular tourist service sometime this year.

Main line track is being refurbished, as well as much of the track and switches in the Rockhill Furnace yard, brush has been cleared and steam locomotives are being rebuilt. By summer, the railroad hopes to offer regularly scheduled diesel-powered trips all the way to Colgate Grove.

Here’s a look at some of the major undertakings.

Work is progressing on two of the railroad’s Baldwin 2-8-2 Mikados – 14 and 16. A new tender tank for 16 is under construction at Curry Rail Services in nearby Hollidaysburg, Pa. It’s being built to the same specifications as the old one, and original grab irons, hatches, valves and other components will be used. Strasburg Rail Road is doing work as well, with 14’s drivers and rods trucked to Lancaster County earlier this month for replacement of the wheel centers and reprofiling of the tires. Strasburg is also reconditioning the safety valves for both locomotives.

Locomotive 16 is still expected to be the first steamer back in service and the goal remains for that to happen before the end of the year, said Brad Esposito, the railroad’s general manager. New boiler tubes have been ordered for both locomotives, as well as components for 16’s superheater.

Brush has been cut at the Colgate Grove wye and picnic area, which initially is how far EBT trains will run. Trees were also thinned out around the trestle over Aughwick Creek south of Orbisonia so that the railroad can do some preventative maintenance – including repointing of the piers later this year – and stabilization. “It’s in amazingly good shape,” Esposito said.

Trackwork has been completed on just over two miles of main line – about halfway to Colgate Grove, Esposito said. Work still needs to be done on the bridge over Runk Road, which was damaged last year when it was struck by an oversize load. In the yard, all switches have been rebuilt. 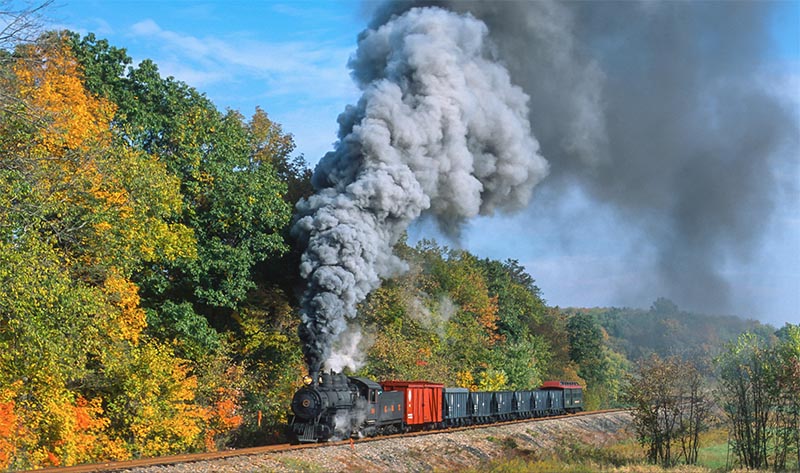 An EBT photo charter in the 2000s. Photo by Steve Barry.

The railroad is up to 17 employees – 13 of them full time, Esposito said. But there’s still plenty of work to be done, and the Friends of the East Broad Top have been instrumental with various projects.

When the East Broad Top was a common carrier, standard gauge freight cars were regularly temporarily re-trucked with narrow gauge ones at the Pennsylvania Railroad interchange at Mount Union. The EBT is on the hunt for a handful of vintage standard gauge freight cars – including a gondola, hopper and boxcar – to add to the authenticity as well as for use on photo charters. “We’re trying to show the whole picture, Esposito said. “And if we can find one or two examples, we can better tell the story.”

In late December, the EBT Foundation received a $1.4 million grant from Pennsylvania’s Redevelopment Assistance Capital Program (RACP). The funds will be used to retire a portion of the mortgage held by the previous owner and pay for several preservation and construction projects, including ADA compliant platforms at Colgate Grove and on the wye shared with the Rockhill Trolley Museum, as well as track work.

State RACP funds are used for regional economic, cultural, civic, recreational and historical improvement projects, according to the commonwealth. They are also designed to generate increases or maintain current levels of employment, tax revenues, or other measures of economic activity. Once up and running, the EBT is expected to have a large impact on the number of visitors to Huntingdon County.

For Esposito, the year has flown by. “It’s already been a ton of fun,” he said. “I still can’t believe I get to do this for a living.”