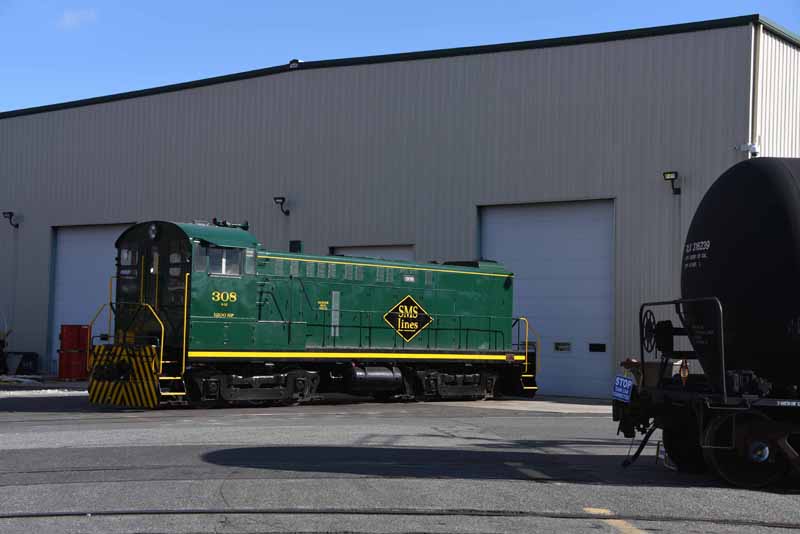 SMS Rail Lines’ Baldwin S12 308 is seen in fresh paint outside the Pureland, NJ shops. It was built in 1953 for Michigan Limestone. Photo by M.T. Burkhart.

Constructed in 1953 as Michigan Limestone 116, the locomotive came to SMS about 20 years ago and was renumbered 308. In 2006, it received a basic black scheme with “SMS Railroad Co.” spelled out on the hood. It has seen service at the railroad’s home base in the Pureland Industrial Park as well as the refinery at nearby Paulsboro, NJ over the years.

The Michigan Limestone and Chemical quarry is located near Rogers City, Mich. on the shore of Lake Huron. Founded in 1910, it was controlled by giant US Steel. Its plant railroad rostered Baldwins as well as Alco locomotives. Operated today by Carmeuse, the facility remains the world’s largest limestone quarry, according to the state historical commission.

While in the shop at Pureland, the Baldwin received engine work as well as an air compressor rebuild and a coat of the railroad’s green, yellow and black corporate colors. It’s expected to be ferried to the railroad’s Morrisville, Pa., industrial park operation in the near future.