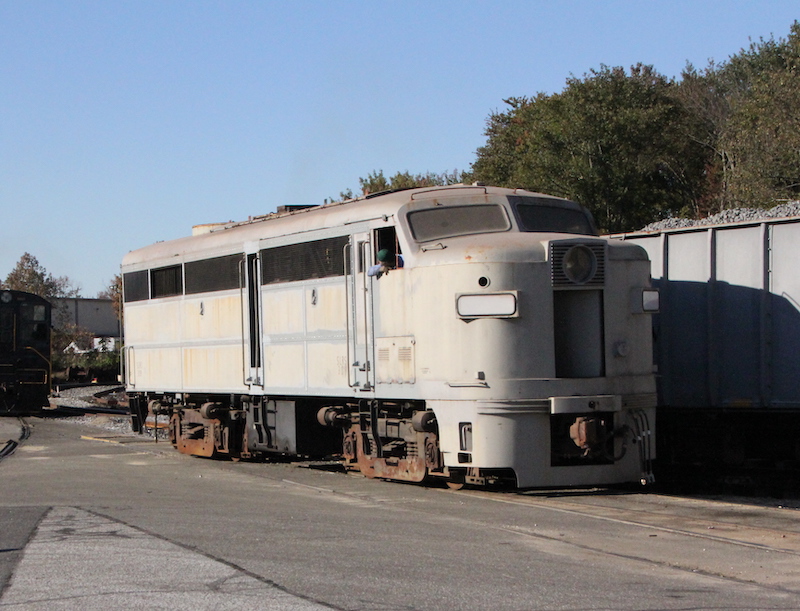 An A-B-A set of privately owned Alco FA-2 locomotives will be painted in Pennsylvania Railroad’s freight scheme — Brunswick green with a single yellow stripe — a livery that hasn’t been seen since the 1960s. And if that wasn’t exciting enough for Pennsy fans, owner Bobb Losse Sr., is also installing the rooftop “Trainphone antennae,” a unique feature of PRR locomotives from WWII into the early 1960s. The Alco cab units are currently at SMS Rail Services’ shop in New Jersey where they are being restored to service. The first one was fired up back in October.

Though some of PRR’s EMD streamliners survived into the Penn Central era, all of the Alcos, Baldwins and F-M cab units were retired and scrapped beforehand. The FA-1 series was retired in 1965 and the FA-2s met the torch in 1967. The nation’s last FA units appeared doomed in the early 1970s as the final four operators began trading them into General Electric for new locomotives. But fans were happily surprised when GE converted them into HEP/control cabs for Long Island Rail Road.

Last October, Losse became the first to successfully restore one of those former LIRR units as a fully functional locomotive when the former LIRR 602 (L&N 309) moved under its own power for the first time in 50 years. Since then, the mechanical focus has shifted from restoration to maintenance and troubleshooting, which has prompted a search for more injector pumps to keep as spares for the often challenging Alco 12-244 prime movers. Mechanical restoration of LIRR 601 (previously L&N 617) will follow, while the B-unit will remain unpowered. Built as Spokane, Portland & Seattle 866B-1, the FB-1 lost its 244 engine when it became the first B-unit converted to a Remote Control Car by Pacific Great Eastern.

Losse tells Railfan & Railroad that he wants the set to look as close to “as built” as is practical but has elected a few minor cosmetic variations. “I decided not to put ladders or grab irons up the nose of the unit. So we put them up the rear bulkhead like Western Maryland, Canadian National and others have done.”

While the “impossible dream” Losse has long harbored is tantalizingly close to realization, he is putting his desire to see a Pennsy FA on hold for now to ensure paint uniformity. “We have talked about the timing of the paint job and decided to hold off and paint the two FA-2’s together rather than painting one now and then another in two years,” he said.

After two decades of work on his Alco dream, Losse doesn’t want to rush the finish or set any timetables. “Here is my plan for this equipment: I want everything running, blue-carded and painted in my lifetime. That’s the goal, that’s the plan,” he said.