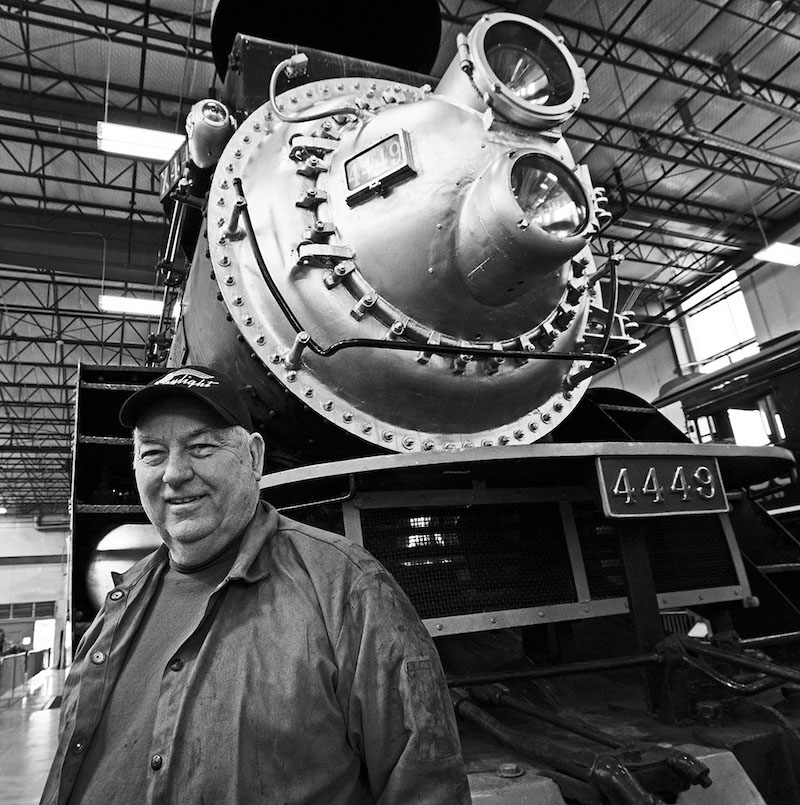 Doyle McCormack has been involved with some of the most memorable preservation efforts in the last half-century. Photo by Justin Franz.

After two postponements in 2020 and a 16-month delay due to COVID19, the American Steam Railroad Preservation Association has set September 18, 2021, for its second Legends of Steam Dinner, featuring this—and last–year’s honoree, Doyle McCormack.

The event will take place at the Mad River & NKP Museum in Bellevue, Ohio, perhaps the most appropriate place to recognize the achievements of a man whose railroading roots run deep in northern Ohio and along the Nickel Plate Road. Those lucky enough to attend will get to hear his personal account of some of the most significant preservation projects of the past half century, including the restoration and operation of NKP 2-8-4 759, the restoration and operation of Southern Pacific 4-8-4 4449 for the American Freedom Train in 1976, and the repatriation two former Delaware & Hudson Alco PA-1s from Mexico and restoration of one of them, D&H 16, as NKP 190.

As the son of an NKP operator and dispatcher living in Conneaut, McCormack spent his youth watching fleets of Lima Berkshires and Alco PA-1s that dominated the NYC&St.L mainline, getting his first cab ride aboard the original NKP 190. He will share stories his dad and other NKP railroaders passed down to him, such as how beating the eastbound 20th Century Limited out of Cleveland with a Berkshire-powered perishable train was what separated the men from the boys.

The 1964 merger of Nickel Plate with Norfolk & Western seemingly derailed his dream of piloting NKP locomotives. Undaunted, he hired on with N&W as a clerk, then fireman and finally, engineer, while realizing that first dream by helping resurrect and run 759.

In 1974 he took on the restoration of SP 4449 for use on the American Freedom Train. It was the start of a lifelong relationship with the engine and its owner, the City of Portland. He subsequently resumed his “day job” as an engineer, but on the West Coast, working for SP, Amtrak and Union Pacific.

His reputation well-established, he would work or consult on numerous restoration projects during the successive decades. The 21st Century saw McCormack at the helm of the Oregon Rail Heritage Foundation, where he spearheaded construction of the Oregon Rail Center, home to Portland’s three steam engines, SP 4449, SP&S 700 and Oregon Railroad & Navigation 4-6-2 197. He retired as ORHF president in 2019 but remains involved and is working to make his NKP 190 fully operational.

Tickets for the event are $105.00 per person and will help with the restoration efforts of Reading 4-8-4 2100 and other American Steam Railroad projects.

A veteran of Reading’s Iron Horse Rambles, 2100 was purchased from scrap dealer Striegel Supply & Equipment by Ross Rowland in 1975 as a parts source for sister 4-8-4 RDG 2101, which powered the eastern segment of the 1976 Freedom Train and subsequent Chessie Steam Special runs. (Rowland was honored by ASR at its first Legend of Steam Dinner in 2019.)

The 2100 was purchased and restored to operating condition by Lionel owner Richard Kughn in 1988. Several owners and a decade later it was converted to burn oil but remained stored until a brief return to action on the Golden Pacific Railroad in 2007-08. The current restoration project was launched by ASR in 2015.

Museum doors will open at 3 p.m. and guests are welcome to explore the grounds and inspect Nickel Plate Road 2-8-4 757, which has been repatriated to its former home in Bellevue after five decades on display at the State Railroad Museum of Pennsylvania. Caboose rides will be offered from 4 to 5 p.m. Dinner is at 5:30, followed by Mr. McCormack’s presentation and a question and answer session. Ticket sales end September 3, 2021.