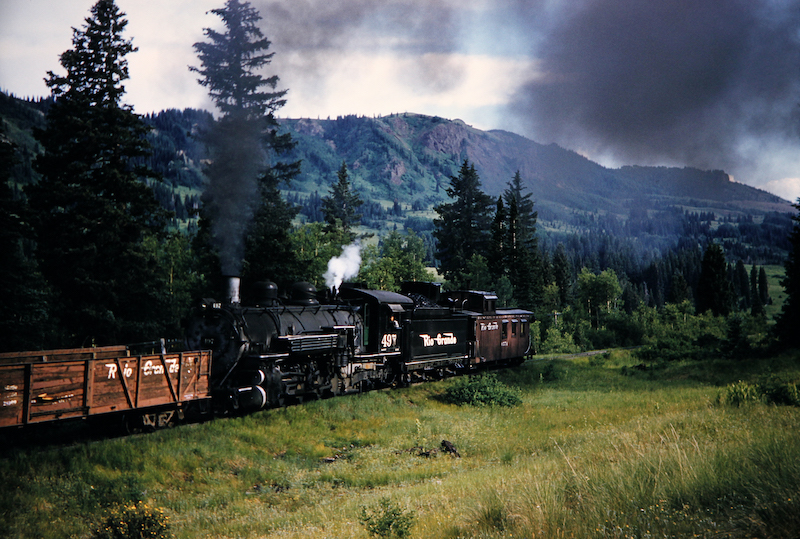 Rio Grande 497 pushes a train up Cumbres Pass in 1961. This scene could happen again if the Cumbres & Toltec Scenic selects the 497 for restoration. Photo by Fred Springer, Collection of the Center for Railroad Photography & Art.

CHAMA — One of the largest Denver & Rio Grande Western narrow gauge locomotives ever built could once again be roaming the San Juan Mountains of New Mexico and Colorado. On February 12, the multi-state commission that oversees the Cumbres & Toltec Scenic Railroad approved a resolution to return a 2-8-2 K-37 locomotive to service.

The Rio Grande’s K-37s were the largest locomotives that ran on the narrow gauge and were built from standard gauge 2-8-0s. The C&TS owns four of the big locomotives, 492, 494, 495 and 497. The railroad is expected to inspect 492 and 497, both of which have run in recent decades, to see which one will be best for restoration.

The vast majority of the former Rio Grande 2-8-2s in service are the smaller K-36 locomotives. Presently, there are two K-37s in service: 491 at the Colorado Railroad Museum in Golden and 493 at the Durango & Silverton Narrow Gauge Railroad.

The restoration of a K-37 would give the C&TS five large 2-8-2s to handle excursions between Chama, N.M. and Antonito, Colo.