Amtrak says it can start service between New Orleans and Mobile today. CSX and Norfolk Southern say not so fast. Photo Courtesy of Amtrak.

WASHINGTON — Amtrak, CSX Transportation, Norfolk Southern and even members of the U.S. Surface Transportation Board butted heads on February 15 and 16, during a two-day hearing about the future of passenger rail service along the Gulf Coast.

Amtrak says it can start running two daily trains between New Orleans and Mobile, Ala., with little impact on the two host railroads, CSX and NS. But the Class Is disagree, taking the stance that Amtrak should pay for millions of dollars in capital improvements so that freight trains along the route are not delayed. The conflict between the passenger railroad and the freight carriers has been brewing for more than a year and it appears to have finally come to a head before the federal regulator that will ultimately decide what happens.

While the hearing was focused on passenger service on a 150-mile stretch of track across Louisana, Mississippi and Alabama, the decisions made here could have major impacts on future relations between Amtrak and Class I hosts. It was perhaps best summed up by Federal Railroad Administration Administrator Amit Bose, who spoke in favor of expanded passenger service. Railroads have a legal responsibility to allow Amtrak to use their tracks. However, if the STB were to rule in CSX’s favor and force Amtrak to pay for infrastructure improvements — ones Amtrak says are not necessary to host its trains — it could create a higher bar for service expansion in the future.

As a result of those potential impacts, the STB hearing included comments from public officials from across the country who want passenger rail service in their communities, including the mayors of Scranton, Pa. and Madison, Wis. Those commenters were reflective of the first day of testimony, mostly coming from parties interested, but not directly involved, with the case. Among them were passenger rail advocates and freight shippers who use the New Orleans to Mobile route. 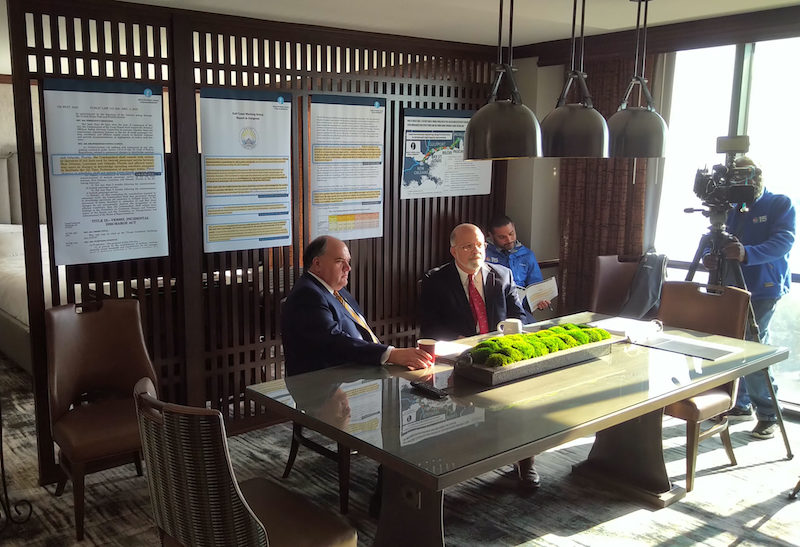 Southern Rail Commission officials, part of the group that is backing Amtrak in expanding service, watch the STB hearing from a conference room in Mobile.

Early on day two, the STB heard from someone with a particularly unique perspective on the issue at hand: Wick Moorman, past president of both Amtrak and NS. Moorman said that he wouldn’t be taking sides in the case but that supported expanded passenger service and he was confident that the STB could help mediate a compromise. He also directly addressed one of the biggest concerns brought up by the freight railroads and shippers, that passenger service would negatively impact the ever-expanding Port of Mobile. He pointed to a similar situation about a decade ago when Amtrak wanted to expand service along a route that connected with the Port of Norfolk, a port that is even busier than Mobile’s.

“We had similar concerns at NS, but we worked with Amtrak to resolve them,” he said.

In the grand scheme of things, NS is a small player in the dispute, since the proposed New Orleans to Mobile train would only be running on a short section of its track. The real fireworks came when officials from Amtrak and CSX took the spotlight. For the second time in less than a month, CSX CEO Jim Foote spoke before the STB, this time about his railroad’s issues with Amtrak’s plan.

“CSX is not against the introduction of new passenger service on the Gulf Coast, but it must be done in a safe and efficient manner,” he said. “If Amtrak prevails here it will be at the expense of our national freight rail network and the customers that rely on it.”

CSX officials noted that most of the New Orleans to Mobile route was single track and that two daily Amtrak trains would negatively impact freight operations unless the passenger railroad helped pay for $440 million in infrastructure improvements.

But in one of the more testy exchanges during the hearing, STB Chair Martin Obermann noted that CSX was already having trouble keeping trains moving on the route even without Amtrak being there. He specifically noted issues around CSX’s Gentilly Yard in New Orleans where a CSX-funded study found that freight trains are presently delayed for hours due to shrinking track capacity. Obermann asked how CSX could pay shareholders more than $30 billion in dividends and stock buybacks, but not spend any money on Gentilly Yard.

Foote shot back and said that the pandemic had upended normal operations for the last two years and that CSX spends more than $2 billion annually on infrastructure improvements and maintenance across its network. But the STB members seemed unconvinced, stating that the issues at Gentilly and elsewhere were a problem long before anyone heard of COVID-19.

Foote also noted that while the route east of New Orleans had passenger service in the past — specifically the Sunset Limited, which was suspended east of the Big Easy after Hurricane Katrina — what Amtrak wants is more than a daily long-distance train.

Later on, Amtrak President and CEO Stephen Gardner spoke to rebuke much of what CSX officials had said. While CSX and NS have said new Amtrak service would be an “unreasonable impairment” to freight service, studies have shown that even without capital investments, Amtrak would cause average freight train speeds to decrease by just seven-tenths of a mile per hour.

While some have said Amtrak should dip into some of the money it got from the infrastructure bill to appease CSX and NS, Gardner said it’s not Amtrak’s responsibility to pay for such track improvements.

“Congress did not enact the Infrastructure Investment and Jobs Act to fund the gold-platting of freight railroad lines in order for them to live up to their legal obligations to Amtrak,” he said.